In November 2000, The Beatles’ “1” (One) album finally hit the shops. This release comes a little after the 30th anniversary of break up of the Fab Four of course. In short, it’s a compilation album full of The Beatles Number one hits in the UK and the USA. Obviously The Beatles “1” (One) album is going to please those who are not too familiar with their album tracks but like the single releases. So, to listen to snippets of the songs on the album, click the play button at the top right.

The Beatles 1 album cover is simplistic in design, of course. However, it gives an instant impact with a massive yellow number 1 on a red background. The Beatles’ name is also on the front cover. Designed by Rick Ward, the pop art 1 album cover is both ambitious and bold at the same time. Indeed, it’s a very effective statement. After all, this album was always going to be a popular choice and making it instantly recognisable was important.

Included with the CD is a small booklet together with a little information about each of the 27 number one singles. Furthermore, the cover is the same on both the CD and the vinyl LP. However, with some issues of the LP came a large poster.

All in all, this is a very effective album cover. 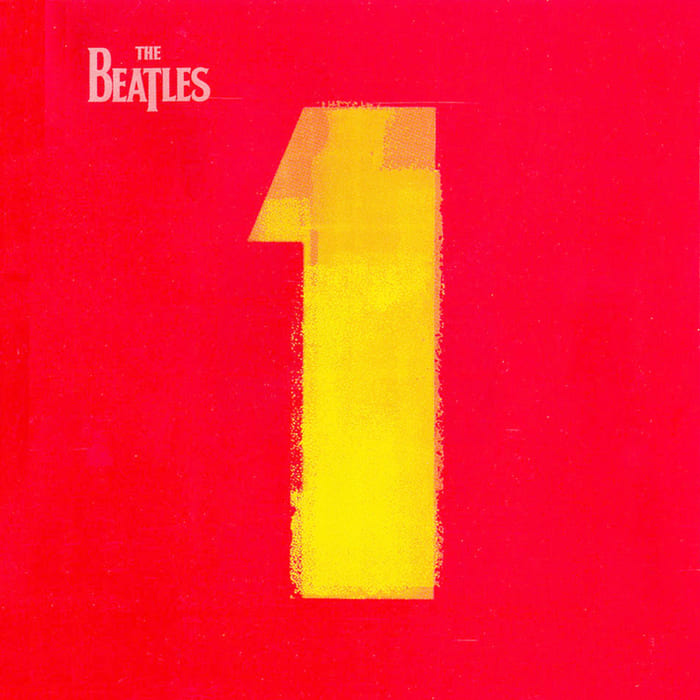 Obviously it is bright and bold making it easy to grab when a Beatles Fix is necessary.

In the first place, what we get with The Beatles “1” album is all the Fab Four’s hits in chronological order. In other words, their first number one was “Love Me Do” so this is number one on the album. Their second number one was “From Me To You”, therefore this is second on the album and so on.

In short what we see is The Beatles as they progress and re-invent themselves over and again from their early Beatlemania days. To many people, this album is all they need of course. However, because they didn’t release any songs from some Beatles’ albums, this “1” album is lacking some of the Fab Four’s best tracks. For example, they didn’t release singles from “With The Beatles“, “Rubber Soul“, “Sgt Pepper’s Lonely Hearts Club Band” and the “White Album“.

While the original release in 2000 was good, there are other releases which are better. For instance, the release of a remaster in September 2011 makes the sound better still. Then in November 2015 (see below), they released the remastered and remixed version which offers even more pleasurable listening, depending on your taste.

On the 6th November 2015, The Beatles 1 album came out together with DVD and Blu-ray video discs. This deluxe version also includes a hardback book together with promotional films, performances, commentary and introductions from Paul McCartney and Ringo Starr. In fact, there are 50 individual video clips.

Giles Martin remixed the tracks for the “+1” album after helping to fix them for the video clips.

“My approach was to be respectful of everything, I had sessions and sessions where I flipped between previously remastered stereos, the mono remasters, and the remixes we’ve done. I flip between everything and make sure I prefer what we’ve done.”

In addition to the new mixes, we get surround sound 5.1, Dolby and the usual frills together with 4k video. For those who don’t buy The Beatles’ “1” album because they own all the tracks on other albums, the stand-alone video discs are available separately. Therefore, this release has something for everyone.

What the “1” album shows is that The Beatles are still as popular now as they were when they hit the charts in 1962!