Here we highlight The Beatles’ 1964 album, “A Hard Day’s Night”, in brief. This was the Fab Four’s third LP but it has some amazing songs. In fact, click the button on the right to hear clips from all the tracks and see for yourself. Of course, there is also a film by the same name and we review that here.

The Beatles started recording this album on 29 January 1964 and continued until 2 June 1964. During this time there were 9 studio sessions. One side of the “A Hard Day’s Night” album has the songs from the soundtrack of the film with the same name of course. Furthermore, the difference with this album is that all tracks are Lennon and McCartney compositions.

According to John Lennon, they got the title of the album from an off-the-cuff remark that Ringo Starr once said. In other words, it is an accidental “Ringoism”.

They recorded the “A Hard Day’s Night” album on four-track tape for the first time. This allowed for higher-quality recording of rhythm tracks so they could mix the sound with the vocal recordings far easier.

Due to the nature of the album, the cover art shows the Fab Four with five different facial expressions across the entire cover. Of course, this makes it look like a film strip and is very effective. Indeed, The Beatles became film stars now. So it’s onwards and upwards for the lads with a moptop hairstyle.

On the top filmstrip is John Lennon with George Harrison below him, then we have Paul McCartney and Ringo Starr on the bottom. As on the “With The Beatles” album, half of their faces are in shade, but it is not as dramatic as their last release.

All the images are random with no significant meaning, but it was another of Rob Freeman’s masterpieces. Of course it is very collectable and easily identifiable. 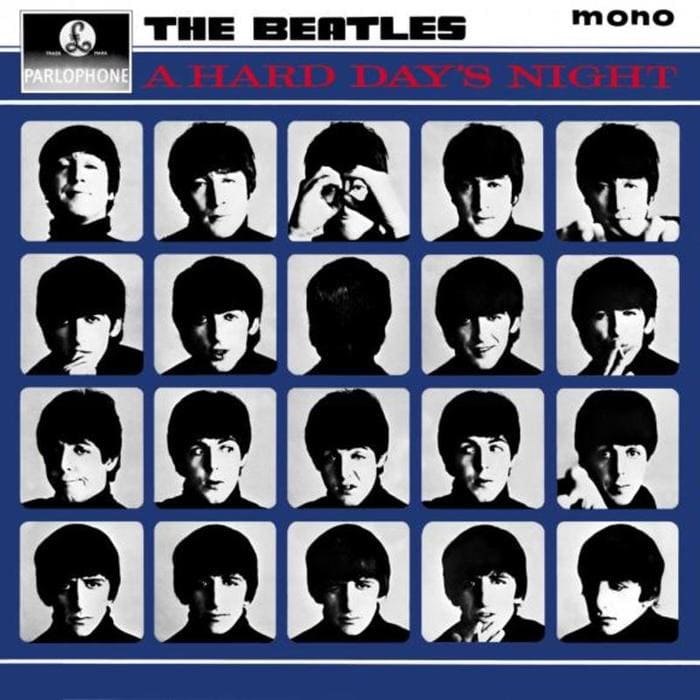 Two weeks before its release in the UK, the Americans released their version of the album. The United States had their own version of the LP which also had different cover art (right). In addition to the soundtrack songs, the American version of “A Hard Days Night” had 4 instrumentals: “I Should Have Known Better”, “And I Love Her”, “Ringo’s Theme”, and “A Hard Day’s Night” itself.

Some considered the UK version to be “too British” being predominantly blue, so the album cover in the USA became red with only four images. In short, the writing on the cover takes up quite a bit of space and is nowhere close to what it should look like! 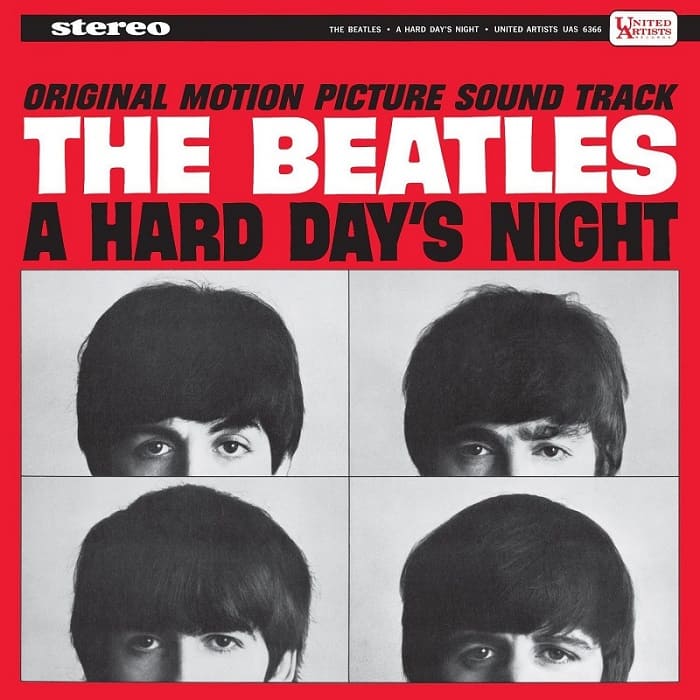 We are all familiar with the musical comedy film “A Hard Day’s Night” of course. Due to their increasing popularity, their previous rock and roll sound was now emerging into their own style of pop music. Furthermore, it was a style of music unique to the lads from Liverpool which took the world by storm. Hence, Beatlemania!

All the tracks on the “A Hard Day’s Night” album are easy to associate with and over the decades are still palatable. Moreover, new generations of music lovers just can’t believe the quality of The Beatles’ songs compared to what they hear today.

To have an instant impact for both the film and LP, the opening chord had to be special, and it was. In fact, it is one of the most iconic openings of any piece of music and well thought out, such was their talent. We are referring to George Harrison’s Rickenbacker 360/12 12-string guitar’s “mighty opening chord”.

In the UK, the “A Hard Days Night” Album was top of the charts for 21 weeks from 25 July 1964. Furthermore, it stayed in the charts for 38 weeks. Of course, various songs from the LP got into the charts too. These included two in the UK, “Can’t Buy Me Love” and “A Hard Day’s Night”.

Apart from the successful album, there is also a film by the same name – “A Hard Day’s Night” (1964). This was The Fab Four’s first feature film and possibly their best as it captures the bands in their Beatlemania glory years.

You can discuss this album here in-depth, of course. However, you may also like to comment about it in the massive Beatles Forum too.