Here we highlight The Beatles’ Abbey Road album in brief. This was The Beatles eleventh studio LP of course and includes a mixture of blues, pop, and progressive rock. Abbey Road sees The Beatles record together for the final time before the band split for good. Although “Let It Be” was the final album release by The Beatles, most of those songs were recorded before these on Abbey Road. So, some argue that Abbey Road is the last “real” studio album from the Fab Four. Click the button on the right to hear clips from all the tracks on this album.

The Beatles were absolute unparalleled superstars by now. Gone were the days when they had little say in matters. The Abbey Road album was due to have the name “Everest” after their sound engineer’s favourite cigarettes. Indeed, George Martin had visions of the band travelling to and using Mount Everest as the backdrop. However, Paul McCartney and John Lennon had a different idea.

McCartney sketched a few ideas for some shots of the band in the vicinity of the Abbey Road studios in London. So, at 11:35 on the 8th August, 1969, their photo shoot began on the zebra crossing outside of the EMI recording studios. Although in those days health and safety was almost non-existent, a policeman did hold up traffic to allow the photography to go ahead. 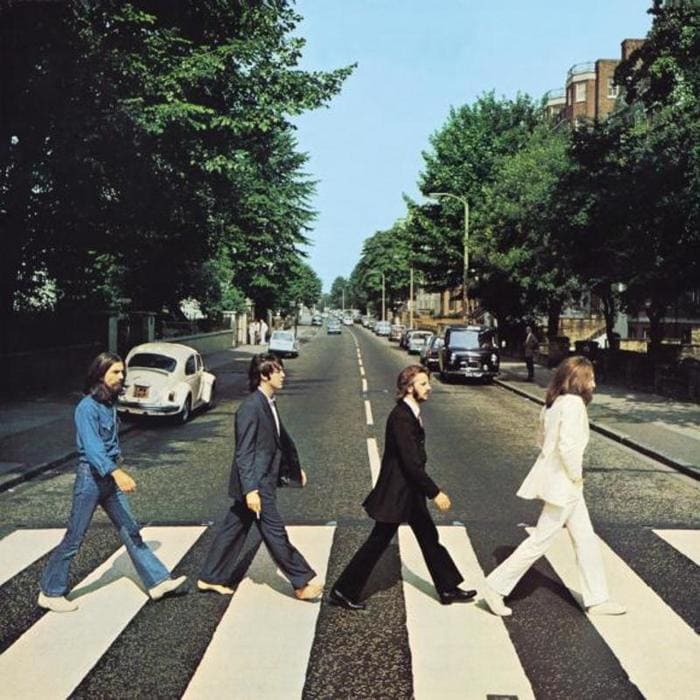 John’s friend, photographer Iain Macmillan, stood on a step-ladder in the middle of Abbey Road and had a ten-minute window in which to take the shots. In total, Macmillan took six shots which Paul McCartney later examined with a magnifying glass before he chose the best one. The rest is history of course.

It was the only Beatles album to have just a picture for the album cover. In other words, no artist name and no title. EMI claimed that the record would not sell without this information. However, creative director, John Kosh, responsible for the production of the cover art said, “we didn’t need to write the band’s name on the cover, they were the most famous band in the world”.

Walking from left to right across Abbey Road we see, John Lennon in the lead followed by Ringo Starr, Paul McCartney and then George Harrison at the rear. McCartney, who is out of step, has no shoes on his feet and has a cigarette in his hand. This cigarette was subject to airbrushing techniques around 2003 by some American poster companies who caved in to the demands of public relations. Of course, George Harrison died of cancer in 2001 and there was calls not to glorify smoking.

Due to this interference, an Apple spokesperson says “We have never agreed to anything like this. It seems these poster companies got a little carried away. They shouldn’t have done what they have, but there isn’t much we can do about it now”.

Every second of every day since the Abbey Road Album came out, tourists from across the world imitate their heroes by having their pictures took whilst walking over the famous zebra crossing. Never has the cover from an LP ever had this much effect. Indeed, you can witness this by viewing the Abbey Road webcam live right here.

The “Paul is Dead” theory was in full swing and the Abbey Road album cover fuelled the theory even further. The conspiracy theorists thought that the image of barefoot Paul McCartney represented a corpse together with him being out of step and with his eyes closed. Then they said it looked like a funeral procession complete with John Lennon as a vicar in white, Ringo Starr being the undertaker in black and George Harrison, the gravedigger at the back.

At this point it’s worth noting the “Fifth Beatle” in the photograph. Of course, that is a reference to the Volkswagen Beetle car on the left. The number plate, LMW 28IF, also helped the theorists with their interpretation, “Linda McCartney Weeps”. Of course, Paul McCartney wasn’t dead. On the contrary, he is still rocking on stage and is full of life.

The Beatles had done most of the work for “Let It Be” so recording Abbey Road was the final real get together by the band. But despite all their differences, The Beatles managed to come together and produce these final recording sessions as mature people. However, once these sessions were over, each of the band members began to embark on different projects creating new bands themselves.

Six days before the release of Abbey Road, John Lennon told band members that he quit. This was, in part, because they rejected his “Cold Turkey” song, but he had also had created a new group, the Plastic Ono Band with Yoko Ono. However, it wasn’t until Paul McCartney announced he was leaving the band on the 10th April, 1970 that a public announcement told us of the bands dissolution.

Although the songs each have an individual title, side two has a medley of songs which takes up most of that space. Each of those songs are very short but fit together perfectly. There is no reason to break this medley up for an individual song as you would miss the point of it.

As you would expect from the world’s best ever band, there are contrasting differences with the songs. For example, we have Ringo Starr singing a children’s song, “Octopus’s Garden”. Then we have Paul McCartney screaming away with Oh! Darling. Indeed, only The Beatles could get away with this.

They released the Abbey Road album on the 26th September, 1969 and it went straight to number one of course. There it remained for 11 consecutive weeks until The Rolling Stones toppled them in December with “Let It Bleed”. But, Abbey Road returned back to the top for another 6 weeks. All in all, the album spent 81 weeks in the UK charts. While in America, the album was at number one for 11 non-consecutive weeks and charted in the Billboard 200 for 83 weeks.

From the Abbey Road album, they released the double A-side single, “Something/Come Together” which peaked at number 4 in the UK. But with so many people having the album, this position is not surprising. However, it made number one in Australia, Canada, Germany and America.

Join us in the Fab Four Forum

Obviously you can comment here about this fantastic Beatles’ album. However, you may like to post in forums as well. With that in mind, we have the biggest and best Beatles Forum on the interwebs. In fact, the Abbey Road album has it’s very own discussion thread here.