The “Anthology 3” album is the last one to feature in the trilogy, “The Beatles Anthology”, of course. As with “Anthology 1” and “Anthology 2”, it contains a lot of interesting material together with Beatles’ rarities and alternative versions of certain tracks. Since it is the final double album in this series, it covers the period from The Beatles’ “White Album” through to the “Let It Be” album. In other words, from 1968 onwards.

The “Anthology 3” album features a lot of material from the “White album” as you would expect since it was a double album just like those in the Anthology series. In fact, to hear clips of all the songs on “Anthology 3”, just click the play button in the top left.

** Due to space restrictions, the CD has two discs while the LP release has three. There is also two cassette releases.

The third and final album cover in the trilogy of albums in The Beatles Anthology series also has a similar theme to the first two. Because “Anthology 3” deals with the period from 1968, we see their last few albums on the cover. The colourful collage includes ripped up pictures from, “Sgt Pepper’s Lonely Hearts Club Band“, “Abbey Road” and “Let It Be” of course. However, as with Anthology 2, we still can see “A Hard Day’s Night“. But there are many other clippings which make the cover look like posters peeling from a wall.

Klaus Voormann was responsible for the cover just like volumes 1 & 2, of course. Indeed, the artist this time has put his name on the Abbey Road crossing. All in all, a very effective cover art which shows the peeling back of album covers over those glorious years. 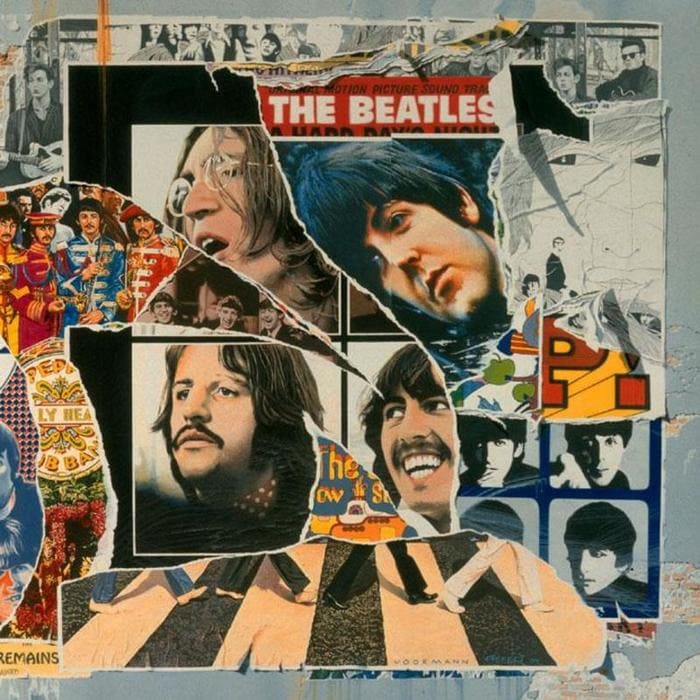 Obviously, those who bought Anthology 1 and Anthology 2 would need this album to complete The Beatles Anthology series. However, even though diehard Beatlemaniacs were always going to buy the Anthology trilogy without question, there was a new generation who just couldn’t get enough Beatles material and it became a ‘must have’.

Although “Anthology 3” got to number one in America, it only reached number 4 in the UK charts. However, as with the previous two volumes, it reached the top ten in most countries including Australia where it got to number 3. That is not surprising since Australian fans of The Beatles were some of the most loyal anywhere.

Unlike Anthology 1 and 2, there was no single release from “Anthology 3”. But there should have been a reworking of an old track. John Lennon’s song, “Now and Then” was the track due for a new lease of life. However, George Harrison wasn’t happy about doing it. This is because he was not comfortable comfortable with the results of the very last Beatles single, “Real Love“. So, being democratic, the three surviving Beatles scrapped the idea.

In short, the replacement was the orchestral piece by George Martin, “A Beginning”. Indeed, that track, was originally going to be the intro for “Don’t Pass Me By”, on The Beatles’ White Album.