Here we highlight the 1964 album, “Beatles For Sale” in brief. This was The Beatles’ fourth LP but what amazing sounds it gives us, even today. In fact, click the button on the right to hear clips from all the tracks and see for yourself.

To begin with, the Fab Four recorded this “Beatles For Sale” album over a seven day period between the 11th August and 26th October, 1964. Of course, the studio recordings had to come to a halt due to their tour of America and Canada within this period. Indeed, in those days, they could create a masterpiece in no time, and this they did!

Again we get the serious faces of the Fab Four on the sleeve of the “Beatles For Sale” album. Of course, by now The Beatles were superstars across the world. Furthermore, their music was evolving all the time and this look perhaps shows how they were soul-searching while looking for a new direction.

There are also some suggestions that point to the thought that Beatlemania might be getting to them. Therefore, their surly expression might reflect this. After all, this was late 1964 and Beatlemania was starting to peak. However, it’s likely that the aim was to have an image where all had similar looks. Obviously George Harrison’s hair was out of place in this image.

This LP’s artwork is Rob Freeman’s third cover but this time it is a colour image. The image came from a collection of pictures took at Hyde Park in London one late autumn afternoon. 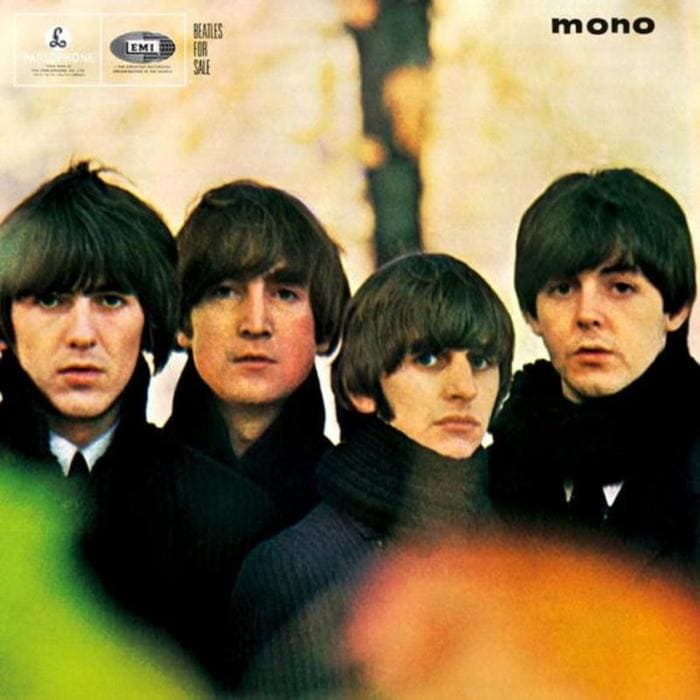 The gate-folded sleeve was also unusual in that you have to open it to access the pocket containing the disc. Paul McCartney says, “the shoot was a doddle, it was easy, we did a session lasting a couple of hours and had some reasonable pictures to use.”

It’s back to basics for this LP, in other words, the “Beatles For Sale” album sees the lads singing six cover songs. Despite John Lennon and Paul McCartney being prolific songwriters, they simply couldn’t keep up with the demand for new songs. Of course, they sang many cover songs on their first two LP’s, “Please Please Me” and “With The Beatles“.

There are some classic songs on the “Beatles For Sale” album but many don’t consider it to be their best album. For example, those with just a passing interest in The Beatles would struggle to know half of the album’s songs. However, with tracks like “No Reply”, “I’m A Loser”, “Baby’s In Black” and “Eight Days A Week”, the album was and still is a “must have”. In fact, some prefer the early recordings of The Beatles. Of course, Beatlemaniacs don’t discriminate and just collect the lot!

In short, Beatlemania was sweeping the world in 1964 and people couldn’t get enough of the Fab Four. So, the release of a new album was always going to be a success. Indeed, “Beatles For Sale” topped the charts after replacing their own “A Hard Days Night” album. However, this time around, the album only topped the charts for 11 weeks. But this was not consecutive weeks. In fact, it was top of the charts three times. Be that as it may, the “Beatles For Sale” album was in the charts for a total of 46 weeks!

No tracks from the “Beatles For Sale” album became singles, however, they did have other singles that were topping the charts in this period. For example, “I Feel Fine” and its B-side “She’s A Woman“.

Obviously you may comment below about this “Beatles For Sale” album. However, we also have a massive Fab Four Forum that has a dedicated forum post for it too. So, pop over today and have your say!