The Beatles’ Blue Album (67-70) is a sister of the Red Album (62-66) of course. Indeed, both these albums are greatest hits compilations that compliment each other well. While the Red Album (62-66) concentrates on the early Beatlemania stuff up to “Revolver“, this Blue Album (67-70) has the rest of the best of The Beatles right up to their disbandment.

Obviously, to have the “Best of The Beatles”, two double albums were necessary. However, both the Red Album and The Blue Album may only have come about because of an unofficial bootleg in 1972 with the name of Alpha Omega. Of course, in response to that, Apple/EMI released these wonderful albums stating that they are “the only authorized collection of The Beatles”.

** Phil Spector was the producer of the “Let It Be” album so he gets credit for “Across the Universe” and “The Long and Winding Road”. However, Paul McCartney and George Martin did not give permission for Spector to produce anything!

*** In the UK, the “Magical Mystery Tour” had 6 track on two EP’s, of course. However, elsewhere, this was a full-length album containing these songs. But, in 1976, there was an official full-length LP release in the UK of this album. Indeed, it became the worldwide standard from 1987 after The Beatles back catalogue went to CD format.

Most are from The Beatles’ albums of course. However, there are 12 non-album tracks on this Blue Album (67-70). But, of those non-album tracks, 4 did become part of the “Magical Mystery Tour”. That album has since become standard after its official release in the UK in 1976.

This Blue Album (67-70) cover shows The Beatles looking down from the stairwell at EMI House in Manchester Square, London, which was the label’s headquarters, of course. In fact, this pose was to recreate the original image we see on the Please Please Me LP. Obviously, their image changed over time from the Beatlemania look to hairy rockers.

This image was originally for the “Get Back” album which didn’t come to fruition, of course. That project later became the “Let It Be” album with Phil Spector as the producer (without Paul McCartney or George Martin’s knowledge). The image on the front of this Blue Album (67-70) is also the same as that on the back of the Red Album (62-66). Likewise, back image of the Blue Album is the same as that on the front of the Red Album.

Moreover, inside of both the Red and Blue albums contains a picture of The Beatles and their fans from the “Mad Day” in London on 28th July, 1968. Tom Wilkes was also the designer of both album covers. 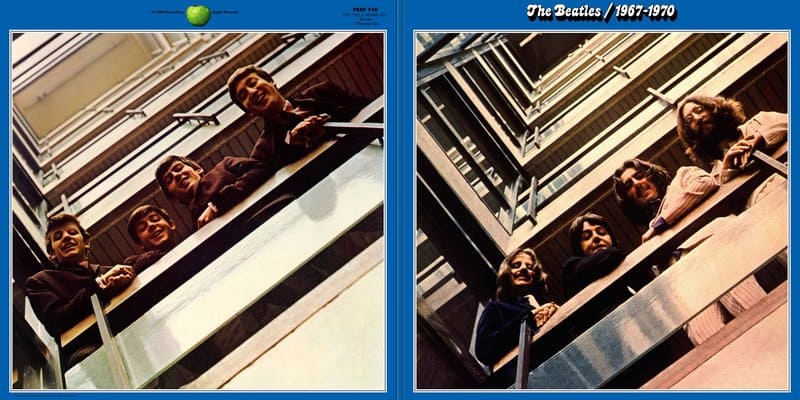 These compilation albums came out on the 2nd April, 1973, and were a welcome release since the disbandment of the Fab Four in 1970. Of course, by 1973, the charts were seeing another revolution with another wave of teenagers enjoying a wide variety of new sounds. Be that as it may, both the Red and Blue albums went straight into the charts.

Indeed, this Blue Album (67-70) reached number two in the UK charts which was one place higher than its sister the Red Album (62-66). However, it did get to number one in America.