Here we highlight the Beatles’ 1965 album, “Help!” in brief. This was The Beatles’ fifth LP but shows the Fab Four still have a grip on matters. In fact, click the button on the right to hear clips from all the tracks and see for yourself. There was also a musical comedy-adventure film with the same name – “Help!” (1965).

To many, the album cover art is just an image of The Beatles from the film by the same name, of course. However, there’s more into this image as you would expect. In the “Ticket to Ride” sequence they wore winter clothing for the snow scenes. They had snow boots and hats together with fashionable jackets which fanned out with arms raised.

Just to point out here that a semaphore is a system of visual signalling by two flags held one in each hand. Robert Freeman, the cover photographer says, “I had the idea of semaphore spelling out the letters ‘HELP’. But when we came to do the shot, the arrangement of the arms with those letters didn’t look good. So we decided to improvise and ended up with the best graphic positioning of the arms.” So it’s closer to “NUJV”. 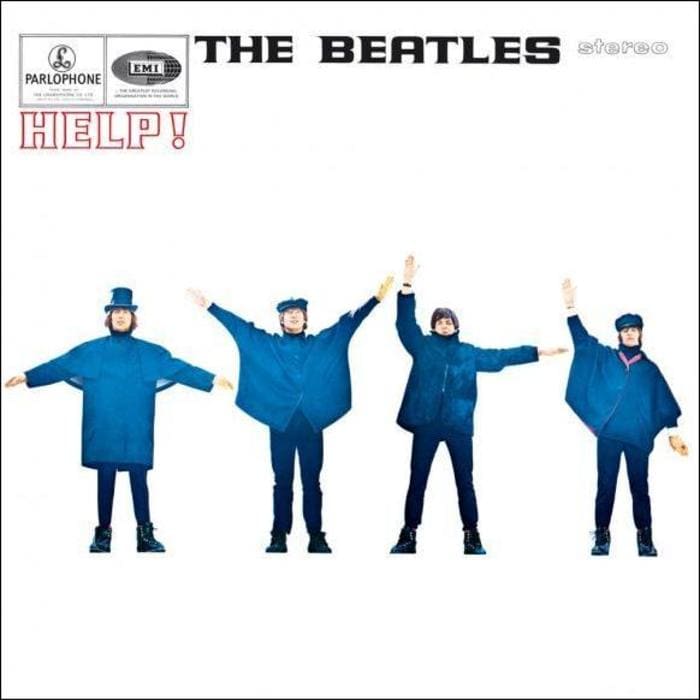 The Beatles recorded the album, “Help!” between 15th February to 17th June, 1965. This allowed them to spend 12 sessions in the studios to get the right sound of course. With this in mind, their priority was to complete the soundtracks first, which they did. Then they made the filler tracks to compliment the album.

The Beatles were still making good use of the four-track tape machine on this LP which they had done since “A Hard Day’s Night“. Indeed, they started to record the rhythm section first. Then they would overdub with the vocals and other instruments.

The song “Yesterday” saw Paul McCartney at his best. He wrote the song and recorded it without the assistance of other members of The Beatles. It has become a song with more cover versions than any other song in history.

“Help!” was possibly the turning point for The Beatles, in other words the Fab Four would become more adventurous in the studio. Indeed, the lads were going to explore a more sophisticated way of making different sounds to entertain their fans. As soon as the band completed “Help!” they then started work on “Rubber Soul” and the progression from their traditional pop music began.

Indeed, the “Help!” album has a few clues to their progression with lyrics and music. For example, gone was the basic sound from the lads with the piano accompaniment from George Martin and in comes slightly more complex arrangements. Of course, everything had to be clean and tidy and the songs themselves palatable which they were. After all, they wanted the film to be a success too.

However, there was evidence to suggest that, emotionally, we were seeing the Beatles beginning to mature. Moreover, John Lennon says that when “Help!” came out he was actually crying for help! Indeed, many of his songs portray this sentiment too.

Chart Success For The Album, Help!

The Beatles’ album, “Help!” was always going to be number one in the charts of course, especially with the release of the film. After all, this was The Beatles and the public couldn’t get enough of the boys from Liverpool. Obviously, the LP went straight to number one in the charts and stayed in the top 20 for a total of 37 weeks. Moreover, out of those 37 weeks, the “Help!” album was number one for a total of 9 weeks.

From the album, two singles also made it into the charts, ‘Ticket to Ride’ and “Help!” Indeed, both singles were number one hits. Moreover, you can hear the songs from the Help! album in the film with the same name.

So, what are your thoughts about the 1965 album, “Help!”? Obviously you may tell us here. However, there is a dedicated forum page for this album too in the massive Fab Four Forum.