The Beatles At The Hollywood Bowl

To begin with, this Beatles album is a live recording with the name of “The Beatles At The Hollywood Bowl” (1977). The audio quality of the tracks recorded from two live gigs in 1964/65 are not that good of course. However, in 2016, to coincide with the release of the documentary film, “The Beatles: Eight Days a Week – The Touring Years”, a similar album came out retitled “Live at the Hollywood Bowl”. So, rather than have two similar pages we shall combine the information on one page here.

Obviously with new demix technology and using effective filtering, they were able to give us a little better quality in 2016. In short, to hear clips of all the live songs on the 2016 album, click the play button in top right jukebox.

The Beatles At The Hollywood Bowl Tracks

Live At The Hollywood Bowl

In 2016, the release of the documentary film, “The Beatles: Eight Days a Week – The Touring Years”, gave the producers a chance to re-examine the original footage and recordings, of course. Moreover, Capitol Studios, the American arm of EMI, found some three track tapes in their archives. Furthermore, these recordings were slightly better quality than that in the London archives. Also, after transferring to higher quality machines, they were able to use demix technology, filter and equalise the sounds to clean things up a little more.

All in all, the newer sound is a little cleaner and sharper than the original release. But, that is down to a matter of taste as some prefer the original. Of course, with over 17,000 screaming youngsters in the audience, The Beatles could hardly hear themselves singing. Indeed, it’s doubtful that the audience could even hear the band. But, with the newer technology, they were able to tone down the crowd a little ensuring that the band are more prominent.

Nowadays, it is all digital technology of course. With this in mind, the “Live at the Hollywood Bowl” album is now available on CD. The track order is exactly as above but with the addition of 4 more songs below. 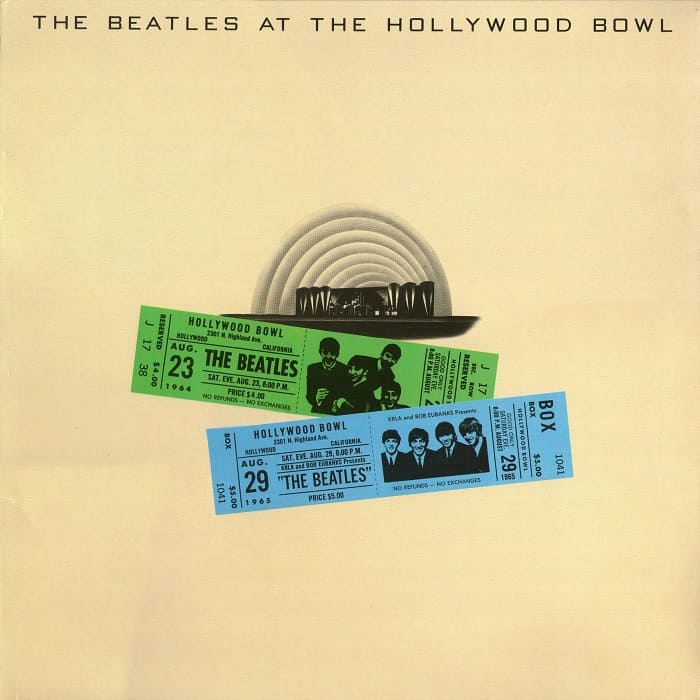 The Beatles At The Hollywood Bowl (1977) 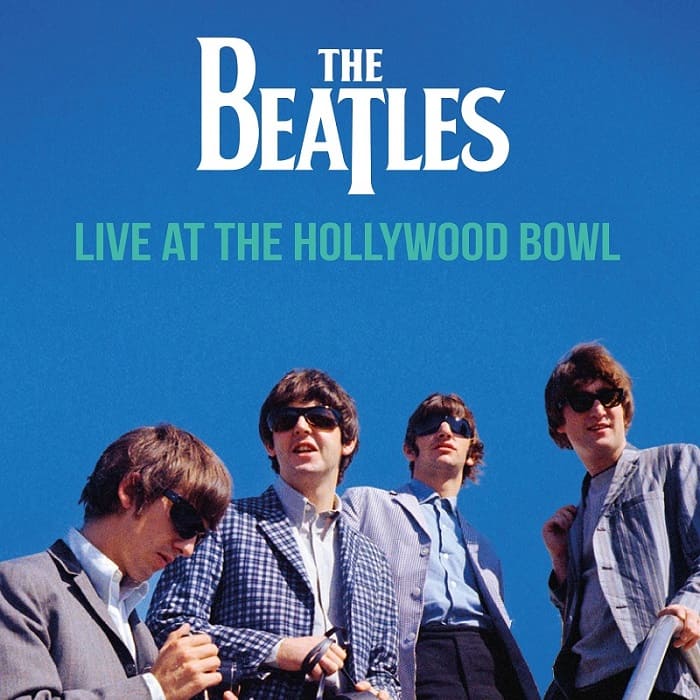 The original LP “The Beatles at the Hollywood Bowl” from 1977 shows an image of the stage at the Hollywood Bowl together with a couple of tickets on the front cover. Its a pretty bland cover but very effective to get the message over. The also tickets show the price of admittance being $4 and $5.

In contrast, on the “Live at the Hollywood Bowl” album, we see The Fab Four in smart dress with sunglasses against a blue background. In their interview upon returning to the UK, they fondly remembered the sunshine in America, so it’s a fitting cover. Of course, this cover is similar to the theatrical poster advertising the documentary film.

The original intension was to record live concerts at Carnegie Hall in New York while The Beatles first toured America on the 12th February, 1964. However, the American Federation of Musicians didn’t agree with this request.

In brief, all the recordings are from three gigs at the Hollywood Bowl. Some tracks come from a gig on 23rd August, 1964. Then some came from the gigs on the 29th and the 30th August, 1965.

The live recordings in 1964 were not high quality enough to release so they had another go in 1965. However, all concerts gave fairly poor quality recordings in the end. Therefore, the tapes remained in the vaults until 1971 when Phil Spector took a look at them. But, his work resulted in nothing to speak of.

In January 1977, George Martin then took a look at the tapes with the view of releasing The Beatles’ first “live” album. In the first place, he had to work with the original three-track recordings which was quite difficult. This was because he first had to find a suitable machine. However, he did manage to get hold of one which was subject to overheating that actually destroyed some of the tapes. So after improvising, using a vacuum cleaner to cool it down, they were able to transfer the sound to a 16-track machine.

One of the reasons why the live album came out in 1977 was because a German company, Bellaphon, released a live Beatles album which EMI could not prevent. That album has the name of, “The Beatles! Live at the Star Club in Hamburg, Germany: 1962”. So, basically, EMI acted to divert the buying public from the Bellaphon release. Once that happened, EMI quickly put the album on their bargain bucket label “Music for Pleasure”, then its deletion from their Beatles catalogue shortly after was noticeable. In fact, when they reissued The Beatles’ back catalogue on CD, they deliberately left the 1977 recording off the list!

Come 2016, there was a need to issue the better quality Hollywood Bowl recordings on CD. The result is a testament to the producers who eventually cleaned up the tapes using the newer technologies available.

So, finally, we have a great “live” recording of a Beatles’ concert to add to our collections. Of course, by doing this, it prevents more unofficial releases of “live” Beatles releases. With this album comes a small booklet which contains a little information about the concerts and some images from the events too.

There was no overdubbing of instruments or voices of course. Indeed, the first release in 1977 came in the original format, complete with a fanatical screaming audience. However, using the newer techniques in 2016, they were able to tone down the audience giving us the Fab Four in all their glory. But we still get the feel of a “live” concert.