Let It Be (Album)

Here we highlight The Beatles’ 1970 album, “Let It Be” in brief. This was The Beatles twelfth studio LP of course and includes a mixture of rock, blues and R&B. Although this was the last studio album release by the band, they did record most songs before “Abbey Road“. In effect, The Beatles broke up before this album’s release. Indeed, we see some clues to this in the documentary film of the same name.

Be that as it may, we did get the final studio album from the best band the world has ever seen. So, click the button on the right to hear clips from all the tracks on this album.

Obviously there were many session musicians too. In fact, over the recording sessions, there was involvement from over 40 others including 14 choristers.

Let It Be Album

Without doubt, The Beatles were a spent force before this album came out. Therefore, the cover of the album speaks volumes. Indeed, the separate images of the individual band members shows no unity whatsoever. It also shows the band members in the late 1960’s which looks nothing like their Beatlemania days.

The album cover has the title of the album at the top, while in the images, we see John Lennon pouring his heart out in song and Paul McCartney is doing his usual happy thing. Then we get a glum looking Ringo Starr. In contrast, George Harrison has a big wide grin which overwhelms the album cover.

The photographer was Ethan A. Russell who took the shots during the filming sessions of the documentary film. 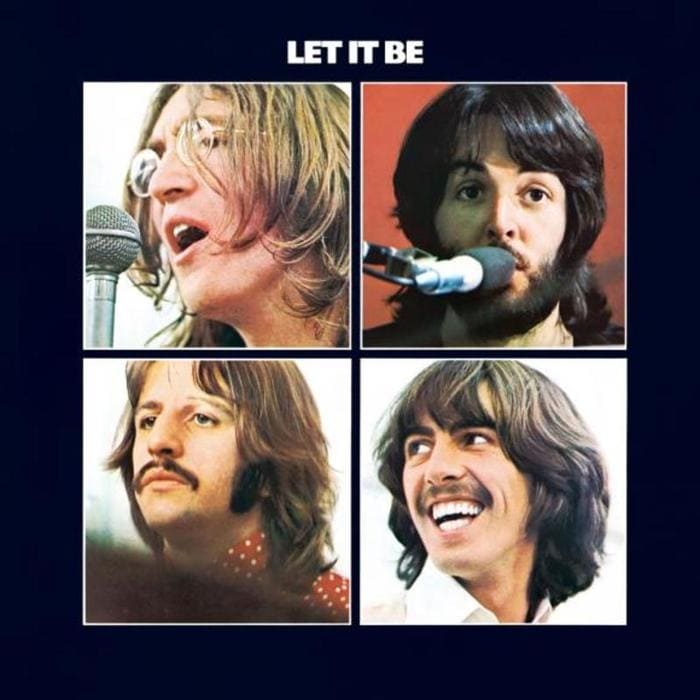 Then John Kosh designed the package by selected the four pictures on a black background for the front cover.

On the back cover we see four more images of The Beatles and a red apple logo. This, of course, represented the maturing and end of The Beatles.

The “Let It Be” album is instantly recognisable, and despite its basic nature, has become iconic in its own right. Indeed, British virtual band, Gorillaz emulated the cover twice on their albums Demon Days (2005) and Humanz (2017).

Since Paul McCartney’s idea was to “get back to their roots”, the original plan was to recreate the cover of their 1963 album release, Please Please Me. So, in May, 1969, Angus McBean, the original photographer of that album, took a few shots of them back at the EMI’s headquarters in Manchester Square, London. That plan didn’t come to fruition.

After the “White Album“, Paul McCartney realised that the individual band members working on their own could cause a break up of the band. Indeed, since the death of Brian Epstein on the 27th August 1967, Paul McCartney worked tirelessly to keep some cohesion within the band. So he put together another project under the name of “Get Back”.

This was a project for a fly-on-the-wall film of the band rehearsals cumulating in a final concert to see the end result. The project was to bring The Beatles together and find their roots again. Indeed, the idea would allow The Beatles to create music which would work well in concert with no studio trickery. After all, the band stopped touring in 1966 and Paul McCartney wanted another public performance.

Filming began at the Twickenham Film Studios in London on the 2nd January, 1969 and the film crew shot everything that day from start to finish. However, they recorded many sessions right up to the 14th January. Tensions were high yet again and just like Ringo Starr walked out while recording the “White Album”, George Harrison walked out of the “Get Back” project on the 10th of January.

Harrison did return on the 15th of January but only after an agreement to scrap the live concert and return to the recording studios at Apple’s headquarters in Savile Row, London. In effect, the “Get Back” project was now over and so was the intended world wide broadcast as well. However, Harrison didn’t rule out any filming or even a live performance.

So, recording began again at Apple’s studios on the 21st January. This was both in the basement and the famous rooftop sessions on the 30th January which was to be The Beatles’ last ever public performance. That idea was a spur of the moment idea for the final shots of the film as time was running out.

The “Get Back” project was dragging on and The Beatles were starting to record “Abbey Road” from the 22nd February, 1969. So, with all the recording sessions in hand, they gave to job of sifting through all the material to Glyn Johns. There was a massive amount of film and recording that The Beatles themselves had no time to sort, and in John Lennon’s words “didn’t want to know”.

So, at the Olympic Sound Studios in London, Glyn Johns began sifting through everything on the 10th March, 1969. However, after coming up with an initial versions of the “Get Back” album, The Beatles rejected it. Therefore the project dragged on even further while The Beatles concentrated on their new “Abbey Road” album.

The release of “Abbey Road” on the 26th September, 1969, allowed them to look again at the “Get Back” project. Not happy at the previous presentation by Glyn Johns, the band recorded two songs specifically for the “Get Back” album on the 3rd and 4th of January, 1970. On the 5th of January, 1970, Johns had another go at producing something that would tie things up once and for all. However, The Beatles rejected this attempt as well.

So, on the 23rd March, 1970, Phil Spector began working on the “Get Back” album. But this all happened without the knowledge of either Paul McCartney or George Martin. This is when the naming of the album changed from “Get Back” to “Let It Be”. Paul McCartney knew nothing of the renaming process and was still referring to their last album as “Get Back” in his interviews as he officially announced he was leaving The Beatles on the 10th April, 1970.

With the break up of The Beatles becoming official, the release of the Let It Be album was on the 8th May, 1970. Of course, the original intentions of a “live” album under the title of “Get Back” never came about. Instead what we get with the “Let It Be” album is something way different to what Paul McCartney originally intended. Be that as it may, many people appreciate the works of The Beatles and it still became an instant success.

With Glyn Johns’ two attempts at piecing together the “Get Back” project both being failures, Phil Spector’s appearance changed everything completely. For example, Paul McCartney’s “The Long And Winding Road”, which was originally a piano ballad became an orchestral epic. In fact, Phil Spector made use of orchestral pieces on a few more tracks including, “Across The Universe” and George Harrison’s, “I Me Mine”.

All in all, whatever Spector was thinking went against the grain for the “Let It Be” album. Indeed, he even left out “Don’t Let Me Down” which of course was in the “Let It Be” film and a classic performance from the “rooftop” session!

The album had no feeling of continuity which just about summed up everything that was happening at the time. Be that as it may, the album still made number one across the world.

Originally, in the UK and Canada, the “Let It Be” album came as a lavish box set in May, 1970. This included a 168 page book entitled “Get Back” which contained images from the film together with a dialogue. Of course this was a collector’s dream and they sold like hot cakes. However, on the 6th November, 1970, they withdrew that edition for a more traditional LP jacket.

In the United States, there was more than 3,700,000 advance orders for the album, and at the time, this was more than any other in the history of recording in America.

This “final” release by The Beatles topped the UK charts for 3 weeks while being in the charts for 59 weeks. In the United States, the situation was similar with a 4 week stay at the top while spending 55 weeks in the charts.

Also topping the singles charts are two tracks from the album, “Let It Be” and “The Long And Winding Road”. Of course, these songs also feature in the film of the same name “Let It Be” (1970).

Let It Be… Naked Release

Although this page concentrates on the original album from 1970, there was another similar release in 2003. This was the “Let It Be… Naked” album.

After The Beatles went their separate ways in 1970, Phil Spector took on the main producer’s role. This didn’t please Paul McCartney or George Martin one bit. However, by now they have little say in the matter.

In 2003, McCartney managed to recreate something similar to what the original LP should really sound like. He stripped back Spector’s influence as much as he could, took out two songs while adding another. Although we may never know just how this original album would have been like, we do get an idea through McCartney’s effort.

From their humble beginnings in the Cavern Club and Hamburg, The Beatles ended up being the greatest band ever. From Beatlemania to their last album, their work continues to influence new bands. Indeed, new generations of pop/rock fans continue to adore their work. The Beatles Forum and Cavern Club has reviewed their full 12 studio albums. However, it doesn’t end here because we have information about all other Beatles’ releases.

Obviously the debate will continue about this final studio album by The Beatles. You may comment here at the Cavern Club, of course. However, we also have the best Beatles Fan Club Forum online. In fact, this album has it’s very own dedicated forum post too. So, pop over today and have your say there also!

One Response to Let It Be (Album)