Let It Be… Naked

To begin with, we are all familiar with the “Let It Be” album from 1970 which was the final studio album by The Beatles. However, the “Let It Be… Naked” album differs slightly in that it is more closer to what the original release should have been like!

Way back in 1969, The Beatles began a project called “Get Back”. The intention was to get back to their roots then make an album. Then they would perform this “live” and help bring the fragmenting band closer together again. Indeed, they almost completed the project for an album with the same name, “Get Back”. However, they decided to shelve the project as the band was now concentrating on the “Abbey Road” album.

The Beatles broke up in 1970 while the “Get Back” project was still unfinished. But, the tracks existed in some form. Behind Paul McCartney and George Martin’s back, John Lennon gave the job of compiling an album from this material to Phil Spector. The project then evolved to what we now know as the “Let It Be” album.

Paul McCartney was never happy with this arrangement, so around 2002, he and George Martin embarked on creating an album closer to the original intentions. Hence, “Let It Be… Naked”. To listen to clips from the album, click the play button on the top right.

Of course, there was also a documentary film to accompany the original release of “Let It Be”. Although not as originally planned, the film does allow us to see The Beatles just before they broke up.

Let It Be… Naked

Fly On The Wall Bonus Disc

This bonus disc gives us a look at The Beatles both in the studio and rehearsals. So, here is a list of the tracks, but there are various “conversations” from the Fab Four in-between some of them. In brief, the total length of this section is 21 minutes and 55 seconds long.

The cover of this “Let It Be… Naked” album is a very clever and striking design. Firstly, the images of John Lennon, Paul McCartney and Ringo Starr are the same as that on the original “Let It Be” album but are obviously monochrome negatives. However, George Harrison’s image is different. This is because on the original, his smile was very dramatic and his teeth were prominent. In this negative format, those teeth may have turned black, so his image is that of him performing instead.

Now we have the Fab Four in an image that shows more cohesion between the band members rather than the fragmented image on the original. 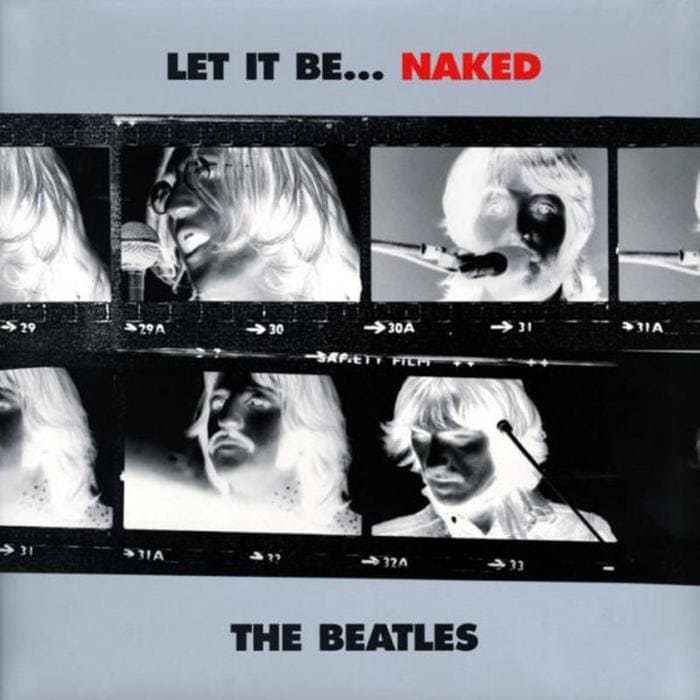 Be that as it may, what we get is an album resembling something like they originally planned. Obviously, George Martin would have had a hand in this project and things would be slightly different again.

There are a lot of differences between this “Let It Be… Naked” album and the original “Let It Be” album of course. In the first place we have a different running order. For example, on the original, the first song is “Two Of Us” while on this new one it is “Get Back”.

In addition to the track running order differences, the drums are now in the centre of the audio giving a “modern” feel to the tracks. The lead vocals are also in the centre now as well. In fact, all the additional dialogue has gone from the tracks too. So, where there was dialogue at the end of the tracks, we now see a sudden fade out where that was.

Gone from “Let It Be… Naked” are the tracks “Dig It” as well as “Maggie Mae“. Furthermore, John Lennon’s “Don’t Let Me Down” track fills that void, although it is a composite version of two versions of the Rooftop Session.

Also gone are all orchestral or choral overdubs which Phil Spector added to the original album. This is obviously noticeable in “The Long and Winding Road”. There are other differences of course, so what is better or worse in your opinion?

Key dates from the “Get Back” album recording sessions are, 4th February, 1968, 2nd to the 31st January, 1969, then the 3rd January, 1970. Originally, the plan was to perform live on a television show and release an album of the same name, but that plan didn’t come to fruition. Indeed, the Fab Four disbanded and Phil Spector produced the final album with his usual “wall of sound”. Of course this was Spector’s trademark in which he attempted to make tracks sound a little more dense for the jukeboxes and radios at the time.

However, Paul McCartney who never liked this interference from Spector, attempts to change all that after meeting up with the director of the “Let It Be” film, Michael Lindsay-Hogg. So, using the original rolls of recording tape and video from the time, a team consisting of Neil Aspinall, Paul Hicks and Guy Massey, began correcting matters.

Obviously, had The Beatles not broke up, the original “Get Back” project could have come to fruition eventually. But we will never know how that project would have sounded like. In essence, Paul McCartney managed to give us at least some idea with this “Let It Be… Naked” album.

In many countries such as the UK, USA and Canada, the “Let It Be… Naked” album reached the top ten in the charts. However, it didn’t quite make the top ten in Australia or New Zealand. But, from that, we see that many people had an interest in this cleverly thought out project. Indeed, Beatles fans got a treat thanks to Paul McCartney rekindling the original “Get Back” project.

Of course, the original release of the “Let It Be” album gave us a film of the same name. However, there was a lot of controversy surrounding the whole project. But, according to Paul McCartney in 2018, we may yet see another release of this film in some capacity!

Obviously, we are grateful for the effort that went into this project. In essence, we can now experience something close to what Sir Paul McCartney wanted us to hear originally. That is not to say we can burn the original album. On the contrary, it allows us to compare both and see the difference. However, a true Beatlemaniac would always reach for the “Let It Be… Naked” album first. Obviously, if you think this is not the case, why not tell us!

Tagged Fly On The Wall Bonus Disc, Let It Be… Naked. Bookmark the permalink.