Live At The BBC (Album)

This Beatles “Live At The BBC” Album from 1994 is obviously the Fab Four appearing on BBC radio in the early 1960’s. This is back to a time when television broadcasts were black and white and only two channels. Of course, pop or rock music wasn’t permissible on TV those days. However, the BBC did allow a certain amount of such music on the radio or wireless as we fondly remember it.

Therefore, between 1962 and 1965, The Beatles appeared on various BBC Light Programme radio shows. Obviously, the Fab Four loved the publicity it gave them before they became the best band in the world. All in all, The Beatles appeared on 52 BBC radio shows between 7th March, 1962 and 26th May, 1965. However, due to lack of space and contractual restrictions, very few found their way to the archives. 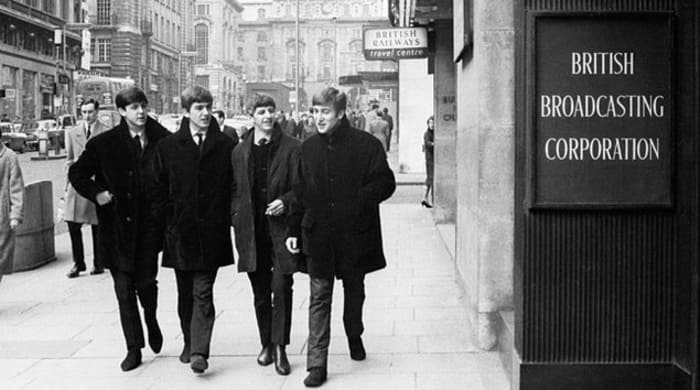 Indeed, it wasn’t even the BBC’s policy to archive much in those days.

The BBC recorded most of these broadcasts, but some were live on the air. Furthermore, the recording studios were not better than the EMI studios at Abbey Road. But, during the recording sessions off air they were able to do a little basic overdubbing and retakes on some songs.

Released originally on the 30th November, 1994, there was also a re-release on the 11th November, 2013. Of course, to make the listening experience better, the new release is a remastered version with some very slight changes. At the same time a sister album came out called, “On Air – Live at the BBC Volume 2”. Furthermore, both albums are available as double CD’s.

In the original 1994 release we see cross-fading between the tracks, while on the re-issue in 2013, this is not the case. Instead we see clean endings to all the songs and speech tracks.

In addition, there are three extra tracks on the 2013 re-issue. However, the only musical addition is the “From Us to You” song at the end of side two. Also, on disc one, between “Carol” and “Soldier of Love” there is an additional speech track, “What is it, George?” Then, on side two, we see a rather humorous speech track that replaces “Have a Banana!” – “Ringo? Yep!” However, the majority of “Have a Banana!” still exists at the end of “A Hard Day’s Night”. But funnily enough, the phrase that gave the original track its name has gone!

** Due to the amount of tracks, the LP versions has three discs. 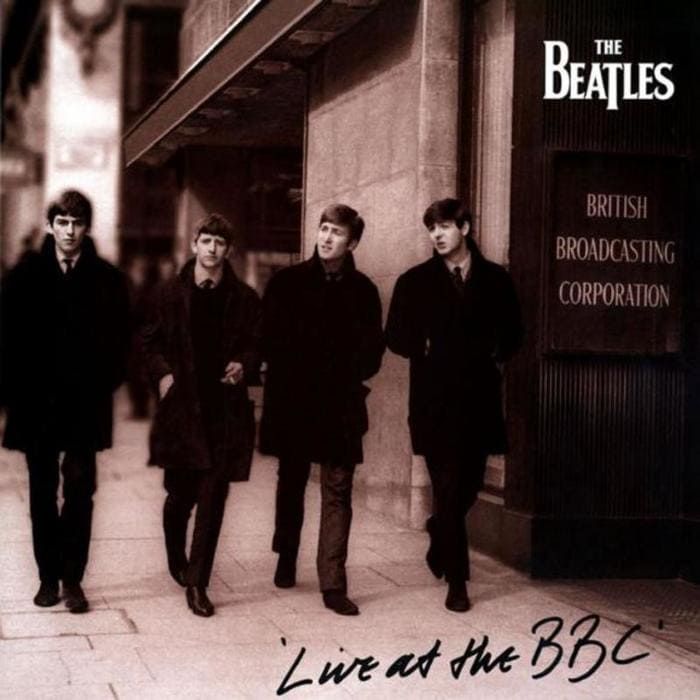 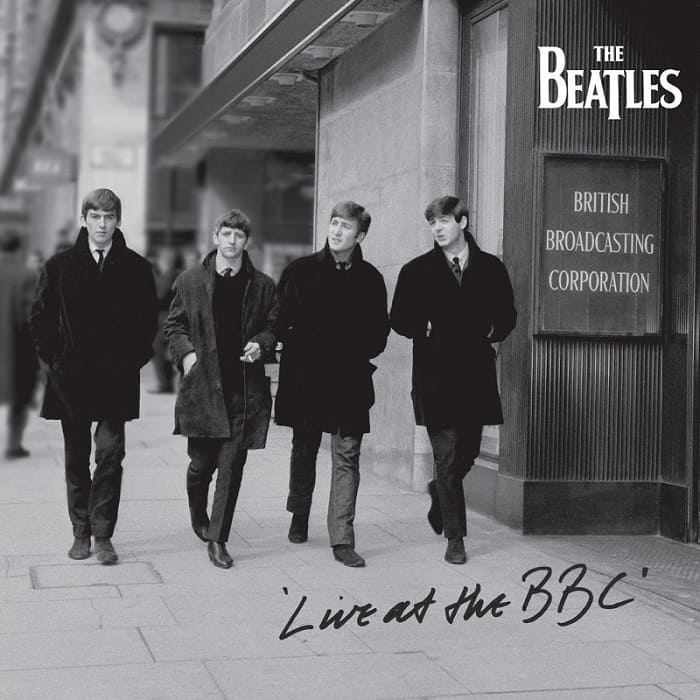 The sepia album cover from the 1994 release shows The Beatles outside the BBC (British Broadcasting Corporation) offices in London, of course. However, for the re-issue in 2013 we see a traditional black and white photograph. Obviously both pictures are the same. But, what they do is help us to identify which is which instantly.

In short, we see the Fab Four causally walking past the BBC offices in London without any screaming fans. John Lennon and Paul McCartney seem to be observing something over the other side of the road while George Harrison and Ringo Starr have their mind elsewhere. Ringo Starr also has a cigarette in his hand. No doubt the political correct brigade will want this Photoshopped out as with they did with Abbey Road, of course!

Although The Beatles were on the radio from 7th March, 1962, recording for the album began from 22 January, 1963 to 26 May, 1965. The Fab Four’s stint on the radio began on “Teenager’s Turn-Here We Go” then continued until a special “The Beatles Invite You to Take a Ticket to Ride”. All in all, they appeared on 52 BBC radio shows, many of these appearances were before Beatlemania came about!

In between the above shows there were other shows such as the “Saturday Club”. Then, there was their own weekly series which went by the name of “Pop Go The Beatles”.

Indeed, there were quite a few bootlegs with some people recording the shows. However, without the aid of suitable editing or mixing machinery, these bootleg Beatles’ albums were of poor quality. One such bootleg with the name, “Yellow Matter Custard” began circulation in 1971, but that album only had 14 tracks.

Be that as it may, this did not stop further Beatles bootlegs from circulating. Indeed, in 1980, a far better quality bootleg made the rounds with 18 songs with the name of “The Beatles Broadcasts”. So, as with previous bootlegs, there had to be an official release of some sort to satisfy the public’s desire and help quash the unofficial source.

Of course, in the early years, before Beatlemania, The Beatles played a lot of cover songs. So, this is what we get on this double album too. However, there are original works from the Fab Four as well. Indeed, think of the album as snapshots from that era as The Beatles were developing.

The Beatles “Live At The BBC” Album was the first official release of previously unavailable recordings since “The Beatles at the Hollywood Bowl” in 1977. The original 1994 release reached number one in the UK and Canada but only number 2 in Australia. In America it peaked at number 3 but overall the album sales were very high where it was available. However, the 2013 re-issue didn’t do too well in the charts, hovering in the top 30/40 positions world-wide.

Not only did the album do well in the charts, it also had a Grammy nomination for Best Historical Album. On the whole, the Live At The BBC series allows people to look back and hear some “raw” recordings of the Fab Four in the BBC studios. Of course, with a little humorous dialogue in between from the lads, it makes the listening pleasure that little better.

On the whole, this album, together with its sister album, is a must for the most fanatical Beatles fans. However, for those who just like perfected studio creations from The Beatles, then take a look at the alternatives.

This 1994 release obviously gives Beatlemaniacs plenty more material to get their teeth into. However, if you are just beginning to like Beatles’ music and wish to buy a few albums, avoid these BBC ones for now. This is because these albums are raw singing with basic instruments. Instead, you should concentrate on their Abbey Road Studio recordings. Indeed, those recordings have a little more professional feel to them. Obviously this is just a recommendation from us to you.

Of course, if you do have these Beatles’ records from the BBC, please feel free to make a comment below. We particularly want to know what drew you to them and how they sound to you. Above all, would you recommend them!