The Beatles’ 2006 album, “Love”, is George Martin’s last record production before his death in 2016. Together with his son, Giles, they created another masterpiece for the Fab Four. Imagine the idea of a Beatles mashup mix, well that’s what this “Love” compilation album is all about.

Obviously we all love The Beatles original artistic work. But now we have the benefit of the combination of two or more Beatles’ songs as one track. Of course, as ever, you can hear clips of all the tracks on the “Love” album by clicking the play button in the top right.

This is obviously not a traditional Beatles’ album cover. In fact, this is one of only a few Beatles albums which would really need the name of the band on the front to identify it as a Fab Four album. The other exception would be the “White Album“, of course.

Since this remix album is a creation specifically for a Cirque du Soleil theatrical production at The Mirage, Las Vegas, then it’s that logo we see. That show also has the name “Love” and it’s a successful circus-type artistic and athletic stage performance which portrays the Fab Four from their humble beginnings to their break up.

Therefore, the album cover is basically a representation of the show which has ran successfully from June 2006. 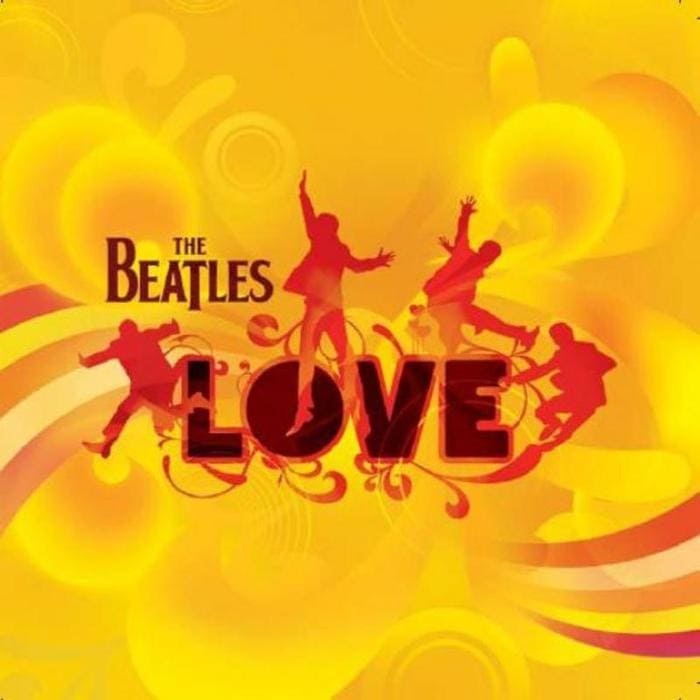 It was George Harrison’s idea to use The Beatles music in a Cirque du Soleil musical show. Indeed, Harrison’s friendship with Guy Laliberté, the company’s founder, lead to discussions in 2000 about the possibility of a production. However, Harrison died in November 2001. So, Paul McCartney and Ringo Starr, together with widows Olivia Harrison and Yoko Ono Lennon, the Beatles’ holding company Apple Corps Ltd., and the MGM Mirage come to a suitable arrangement.

The “Love Show” covers the story of The Beatles and each song is indeed the name of show scene. The scenery has fictional characters from Beatles’ lyrics with the main figure being Sgt Pepper of course. Then, on his travels he meets “Lucy in the Sky”, “Eleanor Rigby”, “Lady Madonna” and many others.

With this in mind, George Martin and his son, Giles, began their quest to create something special for the show. So, out come the data and mixers again. As a result, we get the “Love” album. However, the Cirque du Soleil musical show is not the only one to benefit from this. Indeed, we can all experience the mashup mixes now with this release.

Firstly, imagine “Strawberry Fields Forever” mixed with the cello and harpsichord from “Piggies” and the brass sound from “Penny Lane”. Then imagine the orchestral section from “Sgt Pepper’s Lonely Hearts Club Band”, creeping in as well as “Hello Goodbye” and “I’m Only Sleeping”. Well, this is indeed what happens in the Beatles’ “Love” album with dramatic effect.

Secondly, imagine the “Get Back” song starting off with the opening guitar chord from “A Hard Days Night”. Your dreams have just came true with this album then!

While you listen to a certain song from the album, expect the odd drum roll pop up from another Beatles’ song. Likewise, the same applies with the odd guitar piece turning up where you don’t expect it to.

George and Giles Martin didn’t just use the original tracks for this mashup album of course. They also used various pieces from rehearsals etc. Therefore, this album is for Beatlemaniacs and new fans alike. However, be aware that if you only like original Beatles music, this album may not be for you. But what it does do it take you on a trip you certainly wouldn’t expect!

To all intents and purposes, this remix and mashup is a little bit like having new Beatles material. With this in mind, people are buying the album in large numbers. In fact, around the world, it got high up in the top 10 of the album charts where it became available. But as you would expect, in Canada, home of Cirque du Soleil, it went to number one.