Here we highlight The Beatles’ “Magical Mystery Tour” album in brief. You can also hear clips from all the tracks on the this album by clicking the button in the top right.

Not long after “Sergeant Pepper’s” release, The Beatles’ manager, Brian Epstein died (27 August 1967) at the age of 32. Of course now, without any direction, the Fab Four needed some form of injection. That came from Paul McCartney who came up with an idea of a psychedelic bus trip and so we got the “Magical Mystery Tour”. But, we do know that the idea of another film was already in the pipeline, even before Brian Epstein’s death.

In short, the “Magical Mystery Tour film” shown on the BBC on the 26 December 1967 was the band’s first flop. Be that as it may, there are some memorable images from it, together with some classic songs.

The “Magical Mystery Tour” album is the soundtrack to the 1967 film of the same name, of course. However, while the surreal comedy television film was quickly forgot about, the album became a classic piece of music history. We also see a big difference in the album form too. In America, they issued a full LP record with 11 tracks, while in the UK, we got a double EP (6 tracks). The LP did find it’s way to the UK as an import however.

The Cavern Club mainly refers to UK issues, but on this occasion we shall highlight both releases on one page. In the first place, the Americans would shuffle the order of the tracks on The Beatles’ albums until 1967. The artwork on the album covers was also different. This was until EMI gained agreement after finding some of their work almost unrecognisable in many parts of the world.

Indeed, it was from the “Sgt. Pepper’s” album where work became standard across the globe. However, the “Magical Mystery Tour” was the exception to the rule after the agreement. But, this is acceptable because of the different formats. Then, when compact discs become popular, there was a rush to get The Beatles’ releases on CD’s in 1987. At this point, the American version became the standard.

By standardising the albums, there was also no need to include those extra tracks on the original American LP on the 1988 album, “Past Masters“.

There are far too many other performers to mention who played their small parts on the “Magical Mystery Tour”. Just like “Sgt Pepper’s” we see a whole host of violinists (11), cellists (9) and so on. All in all, there were over 60 session musicians who played their part in the making of this album. 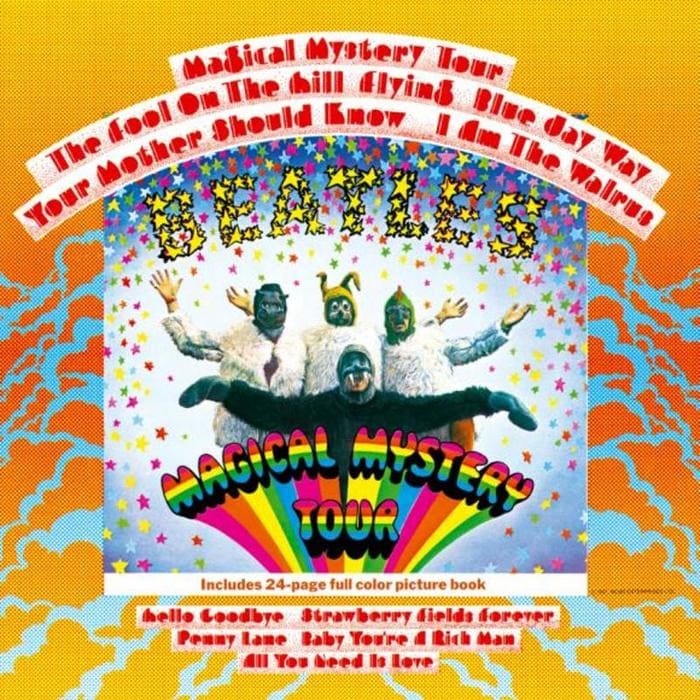 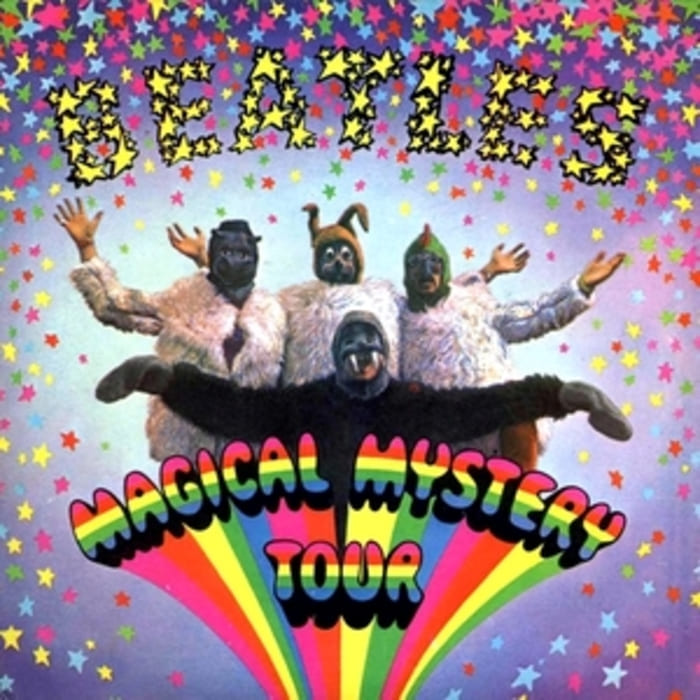 The difference between the UK EP edition and the general distribution of the LP version is a yellow border which also includes the song titles. Of course, the LP has 11 tracks while the double EPs just have 6 tracks (as above).

The flower power era is in full swing and this shows in the cover of the “Magical Mystery Tour” album. For example, we have rainbows, clouds and stars. Then we have The Beatles in a surreal situation dressed in animal costumes. John Lennon is the walrus, of course, Paul McCartney is a hippopotamus, George Harrison is a rabbit and Ringo Starr is the chicken.

The UK EP has a gatefold cover and both versions came with a 24-page full colour picture booklet. This includes images from the film of course and it includes the lyrics to the songs in the centre.

In 1987, when The Beatles’ back catalogue came out on CD, it made sense to adopt the American version. In other words, the 11 tracks on one CD instead of the 6 used on the double EP.

The Beatles were recording songs which are on the “Magical Mystery Tour” for around a year from November, 1966 to November, 1967. The idea of a new film was there, but not yet developed fully. In fact, the didn’t start discussing the new film idea until around April, 1967. Be that as it may, the death of Brian Epstein in August caused a seismic shift at the time. Luckily for Beatles fans, the project came to fruition, perhaps not the way Epstein would have had things.

The band again used session musicians and top of the range recording and mixing equipment. By now of course, the band’s experiments in the studios were advancing faster than ever. Moreover, all band members were becoming experts in the field of studio experimentation.

Of all the complex songs on the Magical Mystery Tour album, perhaps ‘I Am the Walrus’ sums up just how far the band have progressed. But then again we get classics such as, ‘The Fool on the Hill’ and ‘Your Mother Should Know’. Moreover, on the LP version, we have “Strawberry Fields Forever” and ‘Penny Lane’. So, the sounds were there, pity about the film though!

In the UK, the “Magical Mystery Tour” soundtrack was a series of EPs, so this meant that it would enter the singles charts. However, it was kept off the top spot by their own “Hello, Goodbye” single! Of course, this song was on the American LP. All in all, the British EPs were in the charts for a full 12 weeks.

In the United States, the “Magical Mystery Tour” LP did top the charts for 8 weeks. Moreover, had the LP version hit the UK charts, there is no doubt that it would have had the same the success as in the States. The UK had to wait until 1976 for the full-length LP version to have an official release. But, as we see above, the UK did have an import in the 60’s, albeit not an official release.

Of course, many of the sounds on the album are also in the film of the same name – “Magical Mystery Tour” (1967). However, the documentary film is not exactly a classic by any means. But, this is The Beatles and we are Beatlemaniacs, so we can’t get enough footage of the Fab Four!

Obviously you may comment below about this classic Beatles’ album. However, you may also comment on our massive Fab Four Message Boards. Indeed, this album even has its own dedicated Beatles Forum post. So, now you have the best of both worlds.