To begin with, this “On Air – Live at the BBC Volume 2” album is similar in format to the first “Live At The BBC” album from 1994. In 2013, they re-released “Live At The BBC” (after remastering it) together with this new album. In effect, that first release became Volume 1. So what we have now are the albums, Live At The BBC Volumes One & Two. Likewise, they are both double CDs. However, there are LP versions available which have 3 discs due to space restrictions on the vinyl.

Both albums contain material from BBC archives while The Beatles were in the studios at Broadcasting House in London or other BBC buildings. The Fab Four were regulars on programmes such as the “Saturday Club” and of course, “Pop Go The Beatles” in the early 1960s. You can also hear snippets from this “On Air – Live at the BBC Volume 2” by clicking the play button in the top right.

** This album also has various DJ Speech including Brian Matthews

The cover for “On Air – Live at the BBC Volume 2” obviously shows The Beatles walking casually down the street.

Since these Beatles’ recordings come from the early sixties, they include songs from their first 4 LPs. These are obviously, “Please Please Me“, “With the Beatles“, “A Hard Day’s Night” and “Beatles for Sale“. Of course, many of the tracks are covers of some rock and roll classics which the Fab Four admired. For example, there are covers from Little Richard, Chuck Berry and Buddy Holly.

There are a couple of gems on this album because some tracks unique. In other words, they did not come out on any other album as they didn’t record them in the Abbey Road Studios. 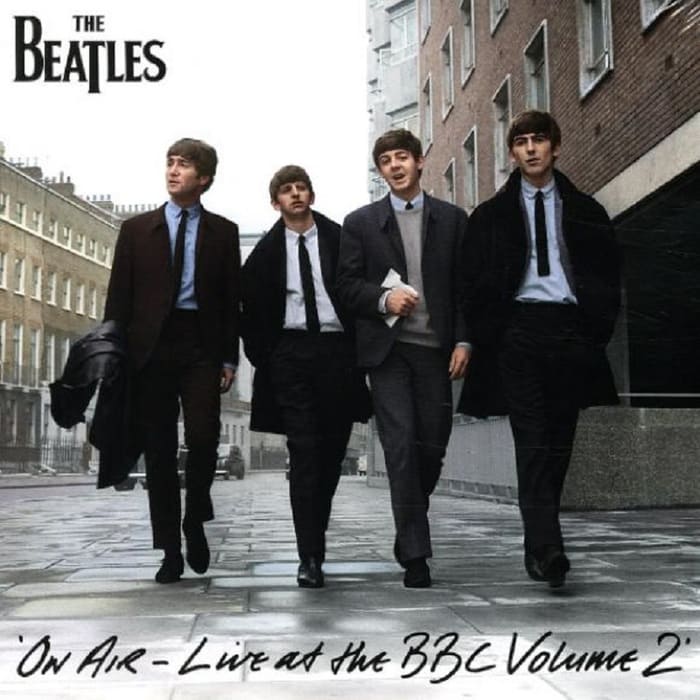 Just to clarify those two previously unreleased songs, “I’m Talking About You” and “Beautiful Dreamer”.

Since this album is a collection of recordings at the BBC, there are many speech snippets. Of course, with The Beatles being a witty bunch, we get some of their humour coming through as they chat with the shows’ presenters, Brian Matthew and Rodney Burke. In effect, being on the radio was an ideal opportunity to publicise themselves. But they also had a great interaction with the fans this way too. For instance, just how lucky would you be to have The Beatles read out your requests on the radio!

Beatlemaniacs would obviously not want to miss out on this album, especially if they have Volume One. So, a steady sale had to happen and it did. Although it has not sold as well as previous albums, “On Air – Live at the BBC Volume 2” did get quite high in the charts in some countries. For example, in the USA, Canada and Germany it reached the top ten. While in the UK, it reached number 12. However, in Australia and New Zealand, which have some of the most fanatical Beatles fans, it only reached number 28 and 31 respectively.

All in all, these sales are pretty good considering the recordings are not from a professional music recording studio. However, they are clean as a whistle and extremely good quality considering the circumstances. But, we must say that it offers only slightly more than its predecessor. While there’s no earthly reason why a completist Beatles fan wouldn’t want this disc, new collectors on a budget may want to skip this album. It obviously comes down to how much Beatles material you want to collect.