Here we highlight The Beatles’ 1963 album, “Please Please Me” in brief. This was the fab four’s’ first LP but what a sound we get from it! In fact, click the button on the right to hear clips from all the tracks and see for yourself.

Andy White (session musician): drums (Love Me Do and P.S. I Love You)

After the release of the singles, “Love Me Do” and “Please Please Me”, an album had to follow of course. Moreover, Parlaphone were in a hurry to get the “Please Please Me” album out. But, even though this was a rush job, the quality of the tracks are incredible. Indeed, The Beatles recorded ten of the tracks (to accompany the singles) in one day alone on the 11th February, 1963. This was during a marathon recording session between 10am and 10.45pm that day.

However, the producer was George Martin who was a wizard in the studio and the rest is history as they say. In the first place, it was George Martin that saw the emerging talent of the Fab Four and quickly took them under his wing. Not forgetting Brian Epstein who worked tirelessly to get a recording contract to begin with. Together, this partnership then gave us the best sounds in history.

While recording all these songs, John Lennon’s voice wasn’t too grand. In fact, Lennon was suffering from a bad cold on that eventful day. So, they waited until the end of the session before they recorded the vocal ripping “Twist And Shout”.

“The last song nearly killed me. My voice wasn’t the same for a long time after; every time I swallowed it was like sandpaper. I was always bitterly ashamed of it, because I could sing it better than that; but now it doesn’t bother me. You can hear that I’m just a frantic guy doing his best.”

Credits for the songs on the Please Please Me album go to McCartney-Lennon but this changed soon after its release.

In short, the album cover says “With Love Me Do with 12 other songs”. Obviously, the actual front cover image, by Angus McBean, shows The Beatles at the EMI headquarters at 20 Manchester Square in London. Pretty basic, but nonetheless, an iconic image.

Indeed, The Beatles recorded the whole Please Please Me album at the EMI studios on 4th September 1962, also on the 11th and 20th February, 1963. So, the image came from this period. While other cover art was available, including some from George Martin, this design was certainly good enough.

The album cover on the right shows the stereo version, of course, which was available from 26th April, 1963. But the original mono version came out around four weeks earlier on the 22nd March, 1963. 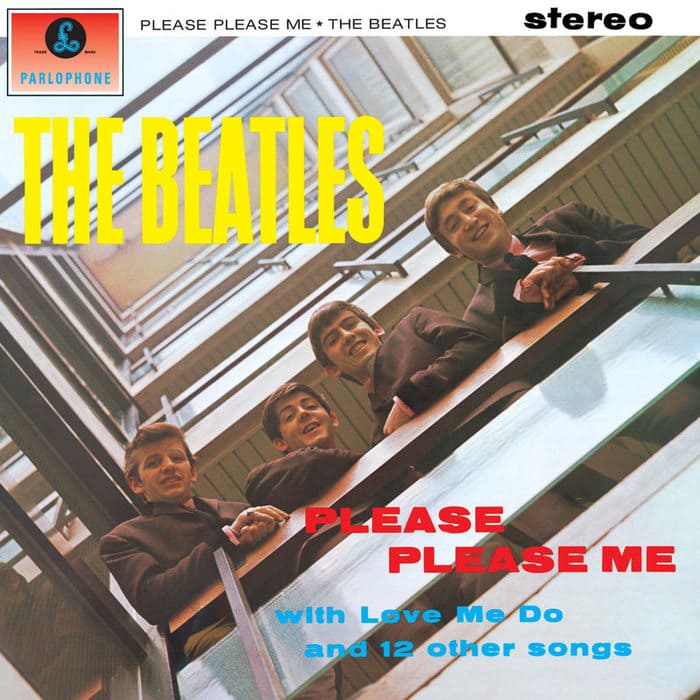 “P.S. I Love You” was the B-side of The Beatles debut single “Love Me Do”, of course. Indeed, this could have been a single itself such was the quality. Also, “Ask Me Why” was the B-side of the “Please Please Me” single. Although a hit in the UK, the single wasn’t available in America until around a year later they added “From Me to You” as the B-side.

Because The Beatles recorded some of these songs in a single live take, they managed to recreate the raw, live sound that had built them a reputation in The Cavern Club.

Just to point out that in the early sixties, releases of albums were more along the lines of easy listening for the older generation. However, this album changed all this. Indeed, the album topped the Record Retailers LP charts for 30 weeks starting from 11th May 1963. The LP spent a total of 70 weeks in the British charts.

Of course, for a pop album to do this was a sign that the buying power of teenagers was having an effect. Indeed, when the “Please Please Me” album fell from the number one slot, its replacement was their next album, “With The Beatles“!

You may comment on this album below as well as in The Beatles Forum. Our massive Fab Four Forum allows you to mingle with other Beatlemaniacs, of course.

One Response to Please Please Me (Album)