The so called “Red Album” is a compilation of greatest hits from The Beatles which came out in the Spring of 1973. It is a double album with The Beatles’ songs covering the period from 1962 to 1966. Of course, in 1973, The Beatles were no longer together as a band. However, they were enjoying individual success as solo artists or with a new group. Be that as it may, the “Red Album (62-66)” release was a welcome addition to the market place for the record buying public.

The Beatles made so many songs that one compilation album was never going to be enough. With this in mind, they released the “Blue Album” at the same time. Obviously, this was to cover the period from 1967 to 1970.

Allen Klein compiled this collection from 7 early Beatles albums, of course. However, it includes 7 non-album singles too. Then there are 6 tracks from the “Rubber Soul” LP.

In the early days, The Beatles made covers of many songs which obviously shows their appreciation to the original artists. However, what is noticeable with this “Red Album (62-66)” is that it only includes their own works, ie Lennon-McCartney songs. This also applies to the album’s sister, the “Blue Album (67-70)”.

Obviously, this album cover is similar to the Beatles’ first ever album, “Please Please Me” from 1963. When photographer, Angus McBean, took the shots at EMI House in Manchester Square, London, he obviously took a few. So, this Red Album has one of those on the front cover. But, it is not the same as that on the “Please Please Me” album, just similar.

On the back of this double album we see a 1969 pose by The Beatles from the same stairwell. Angus McBean took those as well, but those were for the “Get Back” album which didn’t make the light of day. Also, the image we see on the back is the same as that on the front of its sister, the “Blue Album (67-70)”.

The designer of both the red and blue covers was Tom Wilkes and the inner photo of the gatefold albums is from the “Mad Day Out” photo session in London on Sunday 28th July, 1968. 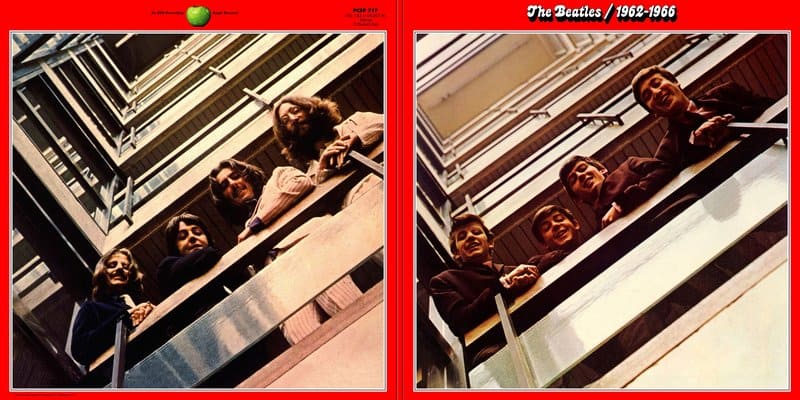 Firstly, the release of The Beatles’ “Red Album” came partly as a response to a bootleg album with the name “Alpha Omega”. This is because, in 1972, the bootleg version was widely available after a television campaign. However, Apple/EMI released the “Red Album” as “the only authorized collection of The Beatles”.

Of course, the “Red Album (62-66)” reached the charts upon release. However, unlike their original studio album releases, it didn’t reach number one in the official UK charts. But it did reach a respectable number three. It did better in the American Cash Box Charts though, there it got to number one.

For those who missed out on The Beatles first time around, this was also an ideal opportunity to get the best of The Beatles in one go. The Fab Four may be no longer together, but the compilation albums still sold like hot cakes.