Here we highlight The Beatles’ 1966 album, “Revolver”, in brief. This was The Beatles’ seventh studio LP of course. However, even though the Fab Four were diversifying, their distinctive sound still persists. In fact, click the button on the right to hear clips from all the tracks on “Revolver” and see for yourself.

The “Revolver” album cover now sees The Beatles as predominantly illustrations, although true pictures of the Fab Four are still there, albeit as smaller images. However, John Lennon, Paul McCartney, and Pete Shotton took them from newspaper articles.

Unlike previous Beatles’ album covers, which featured the photography of Robert Freeman, the main artwork on the “Revolver” album was by Klaus Voormann. The Beatles knew Voormann from their Hamburg days and knew he was into art after studying the subject, obviously. So, The Beatles played the album to him and with the offer of £40 on the table, Voormann had to come up with suitable cover art.

At the time, flower power and the psychedelic era was coming to the fore together with vivid colours. However, Voormann resisted the trend and drew the images in a black pen. 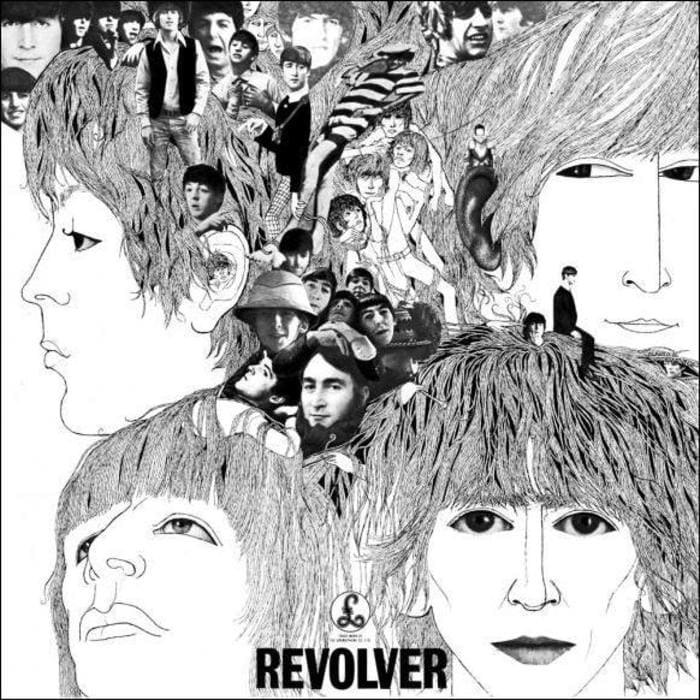 He also went on memory rather than get the Fab Four to pose. Obviously, his focus was on the hairstyle, although the eyes and lips had to have large characterisation. George Harrison’s eyes became piercing while John Lennon’s had a sly look to them.

Klaus Voormann does indeed appear on the cover art, he is the image in the centre of George Harrison’s hair. Moreover, like the “Rubber Soul” album before this one, the name of The Beatles doesn’t appear on the front cover.

They recorded the “Revolver” album between 6th April and 21st June, 1966, at the EMI Studios in London of course. Their experimentation with tape loops and reverse sounds continued together with the addition of varispeeding, close audio miking and automatic double tracking (ADT).

Revolver was the last album from The Beatles before their retirement from touring. Indeed, the Fab Four were going to concentrate on the recording studios at Abbey Road now. After all, their sound nowadays was becoming more sophisticated. Besides, The Beatles were wearing out well before the making of “Revolver” and their previous “Rubber Soul” album. In fact, the recording of Revolver came after a three-month break at the start of 1966.

Beatlemania did take its toll on The Beatles, but we still had a few more years of studio recordings to come. Moreover, some people believe the next few years saw the best of the Fab Four, despite being a studio-based band.

The theme of the “Revolver” album is one of death, transcendence from material concerns while drugs played their part. In particular, LSD. So, we now have an album full of psychedelic rock, electronica, progressive rock and world music. Many critics regard “Revolver” as the best Beatles’ album, but obviously this comes down to individual tastes.

Eleanor Rigby is a typical example of sadness that resulted in a sad and lonely death, of course. But, its not all doom and gloom. Take “Yellow Submarine”, for example, this is an novelty song with children in mind. Then there is the upbeat “Got To Get You Into My Life”. Of course we start to see the psychedelic songs, “Love You To” and “Tomorrow Never Knows” coming through.

All in all, Revolver has something for everyone while not disappointing the core Beatles fans. Of course, recreating this sound live at the time would have its complications. As a result, The Beatles didn’t try to do this. In fact, the release of the album saw the end of touring.

It also came out at the time of John Lennon’s destructive comment that The Beatles were “more popular than Jesus”. The resulting outbursts from the Christian community in America saw the Bible Belt burn their records and books etc. However, this didn’t upset the core Beatles fans too much there. Perhaps Lennon could have worded things differently, but he always had his outbursts.

Revolver went straight to the number one slot upon its release on 5 August 1966. Out of a total of 34 weeks in the charts, seven of those were at the top. From the album, they released a double A-side “Eleanor Rigby” and “Yellow Submarine” which also went to number one in the charts.

The Beatles’ Revolver has many great songs as you will agree, therefore, why not make a comment about the album here. However, we also have a massive Beatles Forum which has a dedicated post especially for this album. Now you have the best of both worlds so, no excuses, have your say today!