Here we highlight The Beatles’ “Rubber Soul” album in brief. This was The Beatles sixth studio LP of course and now we see The Beatles diversifying slightly. In fact, click the button on the right to hear clips from all the tracks and see for yourself.

Of course, it was Robert Freeman, the famous Beatles photographer, who took the picture for the LP cover. The image being stretched slightly to achieve a “rubbery” look to it. As a result, the faces on the Fab Four appear longer. Only John Lennon is looking directly into the camera while the other three are looking in the same direction. Whatever theory is available for the direction they were looking, The Beatles were still pulling in a similar direction at this time.

The wording of the “Rubber Soul” title also has a “rubbery” appearance in keeping with the theme. Obviously, the whole idea was a play on words – soul music and the rubber sole on a shoe. The only reason why the album got its name is when Rob Freeman was projecting the images to The Beatles, the one they chose fell slightly in the projector giving a stretched appearance. 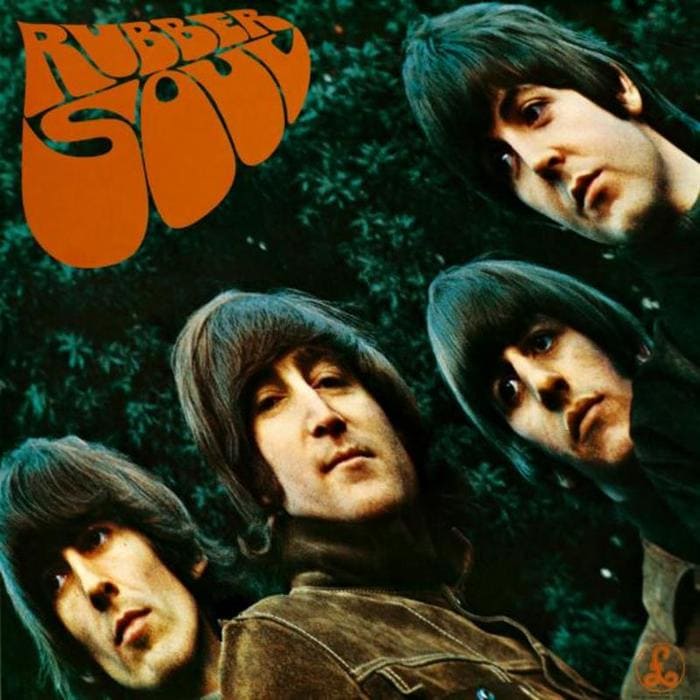 Hence, the name of the album came from that moment.

Charles Front was the designer of the rubber lettering and now we finally see a cover with just the title of an album and the faces of The Beatles. However, we still see the lads with a surly look. But, the rubbery look of the cover doesn’t seem to overly exaggerate their looks.

The writing style became a beacon in psychedelic designs and it was also a way in which the “flower power” generation would make their poster art.

The Beatles recorded Rubber Soul between 12th October and 11th November, 1965. But the song “Wait” is from the 17th June, 1965. John Lennon said that this was the first time that The Beatles were in full creative control in the EMI studios. In fact, the band were becoming increasingly attracted to the many “exotic” instruments at the studios.

Obviously the Fab Four introduce us to the sitar on “Norwegian Wood (This Bird Has Flown)”. Then we hear the harpsichord on the track “In My Life”. But all is not what it appears to be on that track! This is because when John Lennon played a piano solo, after a suggestion to sound like Bach, George Martin recorded it at half-speed. When played back at normal speed, it sounded like a harpsichord, thus, they began to use the recording studios as a musical instrument.

From now on, the complexity of The Beatles’ music was going to develop even further. Not only that, but we are about to see the development of the individual characters of The Beatles.

With the introduction of different sounding instruments and experimentation in the recording studios, some of the songs on Rubber Soul break free from their stereotype pop music. Indeed, this was a natural progression for The Beatles and something that they wanted to do after a few years of making popular music.

In short, the album marks the beginning of a new venture in which The Beatles were to excel themselves. Indeed, Paul McCartney even said that the band didn’t want the sound of The Mersey Beat in all their songs. He continued by saying he wanted every song to sound different, and this is the result.

Of course, The Beatles toured America in August, 1965, with an appearance at the Shea Stadium. But they also met Bob Dylan and Elvis Presley too. Moreover, The Beatles heard a lot of soul music on the American radio stations. So, when recording “Rubber Soul”, they came equipped with a whole new perspective of music to help with their transition period.

“Rubber Soul” replaced their last LP, “Help!” at the top of the charts, spending 9 weeks there. However, the album was to remain in the charts for a total of 42 weeks. No tracks from Rubber Soul became singles in the UK and this was the case with the albums, “With The Beatles” and “Beatles For Sale“.

However, during their sessions, they did manage to record their first double A-side which they released on the same day as the album. This record was “We Can Work It Out” and “Day Tripper” which went to number one in the UK as well as many countries around the world.

Obviously you may comment on this amazing album here at the Cavern Club. However, we also have a massive Beatles Forum too. Not only that but this album has its own dedicated forum post. So, now you have the best of both worlds!

One Response to Rubber Soul (Album)