Here we highlight The Beatles’ “Sgt Pepper’s” album. This was the Fab Four’s eighth studio LP and its full title is Sgt Pepper’s Lonely Hearts Club Band, of course. The album, together with its sleeve cover, became iconic. In fact, click the button on the right to hear clips from all the tracks on album and see for yourself.

Of course, with plenty of orchestral pieces involved with the Sgt. Pepper’s Lonely Hearts Club Band album, there were many other performers. For example, there was a 40-piece orchestra for “A Day In The Life”. In fact, with over 70 session musicians playing their part, the Sgt Pepper’s album became epic!

Obviously, the Sgt Pepper’s Lonely Hearts Club Band album cover became one of the most famous of all album covers. The design was by pop artists Peter Blake and Jann Haworth and the complex cover art includes 57 images of famous celebrities. The Beatles themselves are in a colourful theatrical military uniform which was basically mocking military fashion then.

Paul McCartney presented an ink drawing for Blake and Haworth to further develop. In effect, the artists claim that using cardboard cut-outs you could have a concert with a “magical crowd of whomever they wanted”. The cover was art-directed by Robert Fraser then photographed by Michael Cooper.

Due to Beatlemania being in the past now, they placed their moptop waxworks figures to the fore as a reminder. 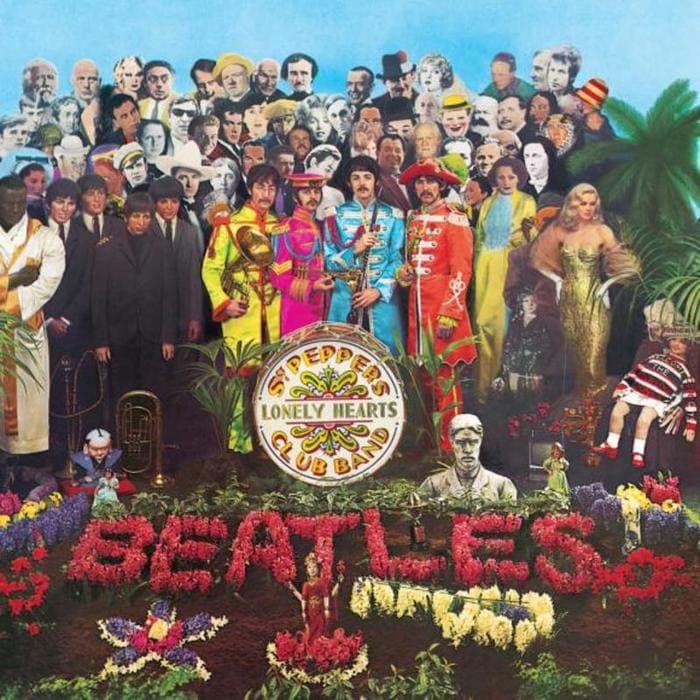 The lyrics are also on the rear cover too and this was the first rock album to do so.

Just to point out that the cover cost around £3,000 to create which was crazy money at the time. However, Peter Blake claims his input resulted in him receiving just £200. Blake says  “I could be bitter about only getting £200 for Sgt. Pepper. But I have to move on.”

In fact, the cover image was originally going to be The Beatles playing in a park. Although that wouldn’t have prevented the album from being a success, it might not have given us such a dramatic effect.

The Beatles recorded Sgt. Pepper’s Lonely Hearts Club Band from 6 December 1966, to 21 April 1967. The band grew tired of touring and they were still recovering from the “more popular than Jesus” remark. Then after returning to the UK, the rumours were that The Beatles were about to break up.

What better then but to start on an early concept album as many musicologists called Sgt Pepper’s. So, over the four months of recording, again using using four-track equipment, the band re-invented themselves. As a result, we get a classic album which was to maintain their position as the best band on Earth!

Paul McCartney explains how the name of the album came about while the band were on the road. He was having a meal with Mal Evans, The Beatles’ road manager, when Paul noticed small packets marked “S” and “P”. Of course, these were the salt and pepper sachets so it became a play on words from there on.

The Beatles retirement from touring obviously allowed the band to take time out and reflect on life and focus on creating different sounds. Their “Revolver” album saw The Beatles push the boundaries within their studio sessions of course. However, the Sgt. Pepper’s Lonely Hearts Club Band album gave us sounds which were unique at the time.

By hiring orchestras and other musicians, the album gave us a mixture of progressive rock, psychedelia, music hall, traditional Indian together with Western classical music.

With all the effort put into Sgt. Pepper’s Lonely Hearts Club Band, the album was always going to be number one in the charts and it was, of course. Indeed, out of the 148 weeks in the charts, the album was top for a combined total of 27 of those. Although not consecutive, it was top on its release for 23 weeks.

Like on four previous Beatles’ albums, there was no single release of any of the songs. In fact, the BBC even put a ban on “A Day In The Life”. However, the double A-side single, “Penny Lane” and “Strawberry Fields Forever” which were originally intended for Sgt. Pepper’s, became the band’s first single in 1967.

All in all, by 2011, the sales figures for the album was 32 million copies worldwide. This of course, makes it one of the highest-selling albums of all time. Not only that, but this concept album has influenced so many people the world over.

Obviously you may make a comment below about this classic Beatles’ album. However, if you prefer to post in a forum we have a massive Fab Four Forum too. In fact, the Sgt Peppers album has its very own dedicated forum post too. So, you have the best of both worlds, therefore have your say today!