Here we highlight The Beatles’ “White Album” in brief. This was The Beatles ninth studio album which has two LP’s of course. Moreover, the self-titled album brought with is some of the Fab Four’s best ever songs. In fact, click the button on the right to hear clips from all the tracks on the album and see for yourself.

In essence, the album itself has no title with just a plain white cover. However, embossed on the front is the name of the band which is also its real title as well. So, the album became known as “White Album”. Therefore, for the purposes of this information guide, we are calling it the White Album too.

Just to point out the different record label for this album – Apple. This was the group’s multimedia business with the name Apple Corps, which replaced their earlier company of Beatles Ltd.

The Beatles also used some session musicians. For example, there were many violinists and trumpeters. In fact, there was over 75 other musicians offering some form of musical or vocal input. So, we won’t list all these for page aesthetics reasons. However, we greatly appreciate their contribution.

Some conspiracy theorists said it was because The Beatles could no longer stand each other. At the time, rumours were rife that The Beatles were constantly bickering, especially between Paul McCartney and John Lennon. It is true that there were conflicts and even Ringo Starr walked out during a recording session.

However, they managed to make 34 tracks in 1968 and 30 made it to the “White Album”. So, making this double album would have had its pressures. 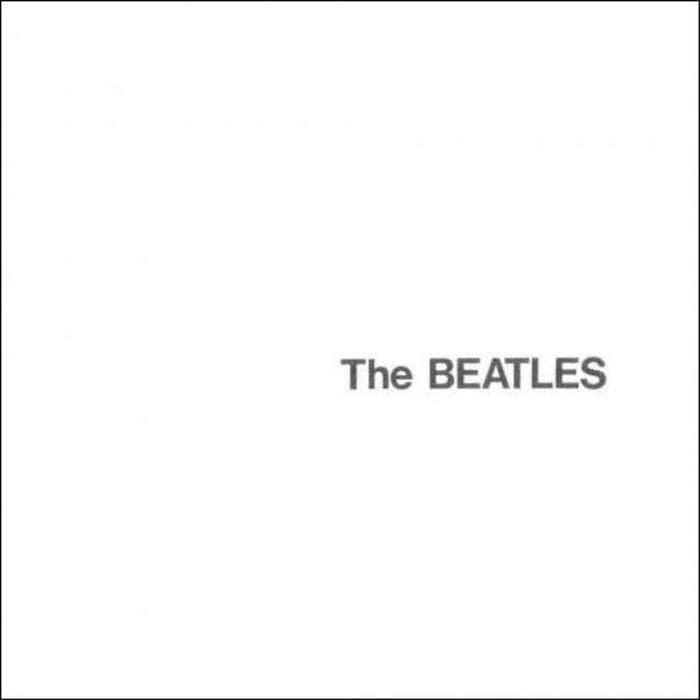 Despite the rumours, and the plain sleeve, the cover did have a designer! Indeed, it was pop artist, Richard Hamilton in collaboration with McCartney that came up with the design. Because there is no official name for this album, people just call it the “White Album”. Despite the obvious plainness of the album sleeve, it is instantly recognisable. Later of course, we see the compilation Red and Blue albums.

The Beatles began recording The White Album on the 30th May, 1968 at the Trident Studios for the first time, but the band also used Abbey Road as well. Then, throughout the Summer of that year, they continued recording, albeit under a tremendous amount of pressure, right through until around mid October. Although tensions did exist, there was still harmony for a lot of the time, especially at the start of the sessions.

When Ringo Starr walked out on the band for two weeks, they recorded “Back In The USSR” and “Dear Prudence” without him. Indeed, Paul McCartney played the drums for those two songs. Even George Martin, the band’s producer, walked out on impulse under the guise of “a holiday”, he left his assistant, Chris Thomas, to do the production by himself.

Geoff Emerick, the group’s engineer, also walked out during the sessions on the 16th July stating that he did not want to work with The Beatles again.

As we can see, the band was obviously beginning to reveal cracks. However, out of this chaos and tension, The Beatles managed to give us another massively influential album. Of course by now, The Beatles had all the experience necessary in the studios to demand perfection, and perfection is what we got. In fact, many people believe that this was the best recording of all.

We know about the rift in the band, but that didn’t stop us from the treat in store once the album hit the shops. The “White Album” is full of quality from start to finish, some more palatable than others of course. However, this all comes down to opinions and taste. But what we see with the “White Album” is a variety of different styles.

Perhaps the obvious rift within the band shows the different styles and the directions they were heading. Beatlemania was still with us but in a more mature way. However, the band no longer need to appeal to the pop pickers as one.

Indeed, a few of the songs are solo efforts and each of The Beatles were now occupying different areas of the studios. However, Paul McCartney was happy to help the other band members develop their ideas.

Immediately prior to recording the “White Album”, The Beatles flew to Rishikesh, India, for a spot of meditation with Maharishi Mahesh Yogi. During their time in India, The Beatles came up with many ideas for future tracks.

Critics were waiting in the wing for this eagerly anticipated album, after all, it had 30 songs and the rift in The Beatles was noticeable. Besides, their last album, “Magical Mystery Tour” was 11 months old now. Moreover, in the UK, the “White Album” was the first full-length collection of new songs since “Sgt Pepper’s Lonely Hearts Club Band“.

Although certain critics were sceptical, many publicly endorsed the album. Over time of course, the “White Album” has proved to be one of the most “significant” albums ever. Indeed, many believe that this album is the best album ever.

All in all, the “White Album” was in the charts for 24 weeks after going straight in at number one. It remained top of the charts for 7 consecutive weeks and then a further week later on. But it was in America’s Billboard 200 for 155 weeks – almost 3 years!

Obviously you can comment below on The Beatles’ double White Album. However, we also have a massive Fab Four Forum in which to comment. Not only that but this album has its own dedicated forum post. So, now that you have the best of both worlds, have your say today!

One Response to White Album