With The Beatles (Album)

Here we highlight the 1963 album, “With The Beatles”, in brief. This was The Beatles’ second LP but it has some amazing songs. In fact, click the button on the right to hear clips from all the tracks and see for yourself.

With The Beatles Album Tracks

Indeed, by now, The Beatles were big with a capital B. So, their album cover art was going to have to match. However, rather than seeing the smiling faces which we did on their first LP “Please Please Me“, this iconic image shows The Beatles with a straight face. The photo was took by Robert Freeman in August 1963 while at their hotel in Bournemouth.

In the words of Robert Freeman, “They had to fit in the square format of the cover, so rather than have them all in a line, I put Ringo in the bottom right corner, since he was the last to join the group. He was also the shortest.”

Of course, the “With The Beatles” album cover art is genius in its simplicity. Obviously shot in half shade, it shows The Beatles in a different light, pardon the pun. 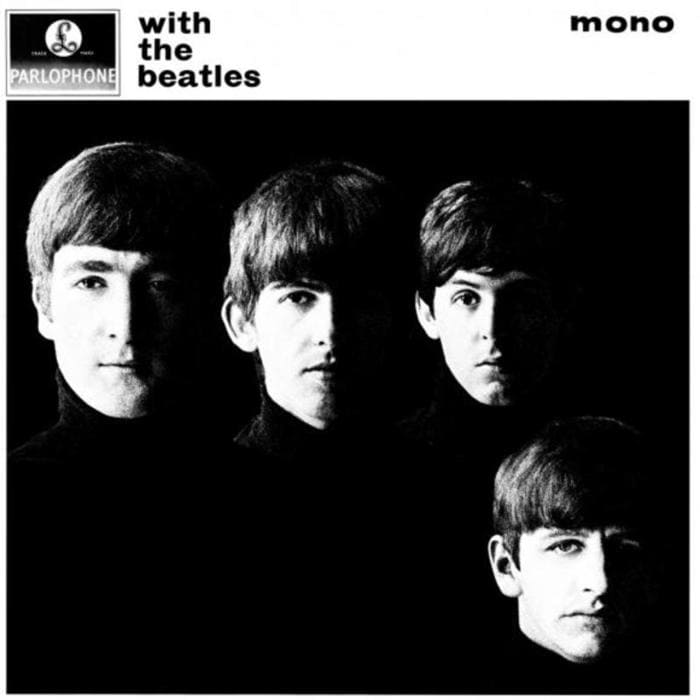 Although EMI didn’t so much like the idea of a black and white photo, they did concede in the end. This is because they had the persuasion of George Martin and Brian Epstein who knew better.

Indeed, the faces of the Fab Four shows just how serious both the band and producers were about their image. Furthermore, now we have an album with great songs and a piece of artwork that we could treasure.

The EMI Studios did win one concession though, because originally George Martin wanted the LP to have a nameless cover. Indeed, the studios decided that The Beatles were not yet famous enough to do this! 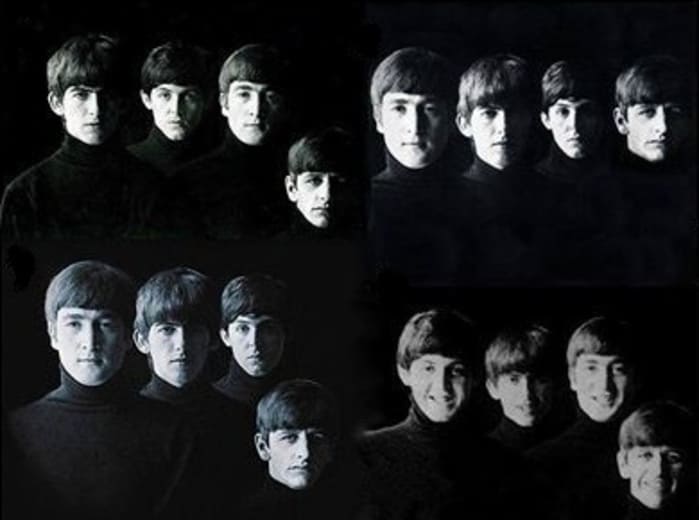 Possible contenders for the “With The Beatles” cover art

The Beatles recorded this album between the 18th July and 23 October 1963. Their earlier “Please Please Me” album was a rush job to get that album out. However, they recorded this “With The Beatles” album over 7 sessions from 18th July to 23rd October 1963. Of course, having a little extra time in the recording studios gave them that extra edge to concentrate a little more on the sound.

Although stereo recordings were available at the time, mono was still the preferred option for releases in 1963. Also, even though they were just using two-track recording equipment, their creativity and experience allowed them to expand on their previous sounds.

Although they didn’t release any singles from the album, it did have some great songs. For example, we have “All My Loving” and “It Won’t Be Long” which may have been a success on their own.

Then there is “Roll Over Beethoven” and “Money (That’s What I Want)” which gives the LP a touch of rock and roll. All in all, the “With The Beatles” album had a fine blend of cover versions and original work.  Now, the band were really taking off and barely had a day off during the whole of 1963.

The Canadians released the album with “Beatlemania” also on the cover! However, the Americans had to wait until 1987 again for it to arrive in original form. This is because in the early 1960s, American albums differed slightly from the original British ones. The Americans still got hold of all the songs in some way though.

Meanwhile, in Australia, EMI there never got hold of the cover art and substituted it with other images. The Beatles noticed this when they were on tour and reports suggest that nobody was happy with that situation.

This second Beatles album sold many copies in advance and it went straight in to the charts at number one. This “With The Beatles” album actually replaced their “Please Please Me” LP at the top of the charts, of course. In fact, there it stayed for 21 of the 51 weeks that the album spent in the top 20.

Just to point out that in 1963, the singles charts included all musical releases in whatever format. As such, this album reached number 11 in that chart too! Obviously the album continued to sell, and by September 1965, its sales went through the one million barrier. This was the first time that British artists achieved this.

As well as making a comment below, you may also join in with the debate about this album in The Beatles Forum. Our massive Fab Four Forum has something for everyone, so pop over today.

Tagged Beatles with a straight face, Pardon the pun, With The Beatles. Bookmark the permalink.