Here we highlight The Beatles’ “Yellow Submarine” album in brief. This was The Beatles tenth studio LP but was also the soundtrack of the animated feature film by the same name. Click the button on the right to hear clips from all the tracks on this album.

Again, as with the more recent studio albums, The Beatles used many session musicians, possibly around 50. Indeed, George Martin himself used a 41-piece orchestra at Abbey Road studios for his input.

Just to point out at this stage that the original Yellow Submarine soundtrack album is a mixture of songs and orchestral pieces from the film. This is because side one of the album gives us songs from The Beatles. In contrast, on side two we get orchestral pieces by George Martin, the band’s producer. However, see below for another version of the Yellow Submarine album!

Side Two (All Orchestral)

Heinz Edelman created the cover image on the Yellow Submarine Album. Both UK and US covers are the same except on the UK version are the words “Nothing is Real” are under the title. This was a reference to the song “Strawberry Fields Forever”, of course. On the rear of the UK cover is a review of the “White Album” by Tony Palmer.

In contrast, US version had a fictitious illustrated biography by Dan Davis of the “Sgt. Pepper’s Lonely Hearts Club Band” on the rear. This shows the ensemble’s battle with the Blue Meanies. It highlighted comparisons to three other epic struggles in the history of the English-speaking world: Beowulf’s struggle to save the Heorot mead hall, King John’s signing of the Magna Carta and Thomas Jefferson’s writing of the Declaration of Independence. 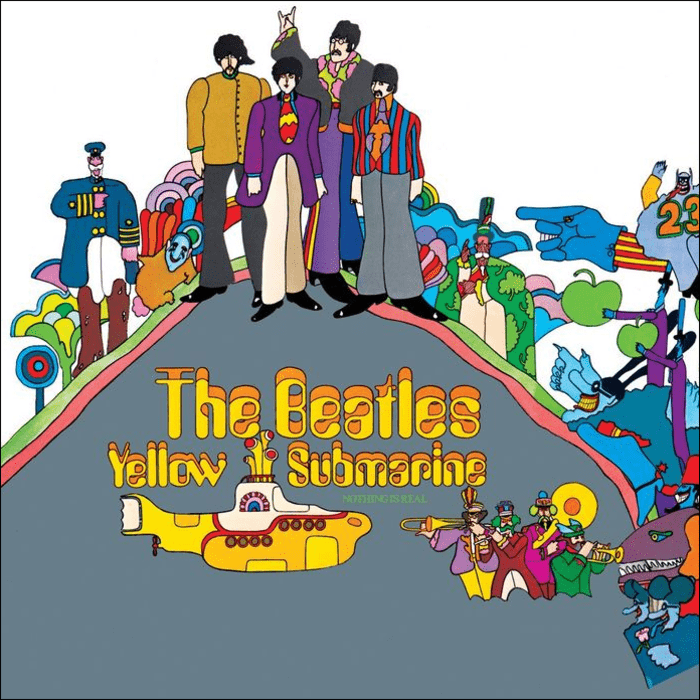 From left to right, we see Old Fred, Jeremy Hillary Boob Ph.D., George Harrison, Paul McCartney, John Lennon, Ringo Starr, the Lord Mayor, the Dreadful Flying Finger, Blue Meanies, Chief Blue Meanie, one of the monsters from Sea of Monsters. Then we see the Sgt. Peppers Lonely Hearts Club Band near the yellow submarine (not on the theatrical poster) and more Blue Meanies. All in all, a surreal and psychedelic album cover befitting the era.

The band recorded the contents of side one between 26th May 1966 and 11th February 1968. Then on the 22nd and 23rd October 1968, George Martin recorded the orchestral pieces for side two. The album was not a significant release by The Beatles since it falls short of the acceptable standards of the Fab Four. In essence, The Beatles just had to write four new songs for the film. So, together with the input by George Martin and a few previously unreleased tracks, a film was born. However, even though not a musical classic, the project was possibly just to fulfil some contractual obligation.

The four songs that The Beatles recorded specifically for the Yellow Submarine Album are, “Only A Northern Song”, “It’s All Too Much”, “Hey Bulldog” and “All Together Now”.

The contrast on this album is surreal in itself, we still have the psychedelic feel on the tracks “Only a Northern Song” and “It’s All Too Much”. However, we have the classic title song together with “All You Need Is Love”. Then finally the contrasting sounds of side two are not what the teenagers of the day took too. But, for the collector, it was a “must have” all the same.

They released the Yellow Submarine Album just a few weeks after the “White Album” which was already number one in the charts, of course. Indeed, its intended release wasn’t that as a high profile Beatles album. You could say it was a “filler” album between the “While Album” and “Abbey Road“. However, this was The Beatles at work and the album was always going to chart.

With the “White Album” riding high already, the Yellow Submarine Album got to number 3 in the charts. All in all, the album charted for a full 15 weeks in the UK and for 24 weeks in the US.

Obviously you can comment here about this remarkable Beatles’ concept album here in the Cavern Club. However, we also have the Fab Forum which is the biggest of its kind on the internet. So, if you like forums and love The Fab Four, you now have the best of both worlds. In fact, there is a thread dedicated to this album already in the message boards. So, pop over today and have your say!

Finally, to commemorate the 30th anniversary of this original release of Yellow Submarine, a re-release of the album came about in 1999. Moreover, it differs from this original one in that it has no instrumentals. In fact, it has 15 songs from the film. Indeed, many people think that this original should have contained just the songs. Be that as it may, we have a full page dedicated to the new “Yellow Submarine Songtrack” album here.

The new album is also a remix and a remaster of this original. So, its well worth checking out, especially for those who have this original album.