Of course, we saw The Beatles release the “Yellow Submarine” album in 1969. However, this “Yellow Submarine Songtrack” is almost unrecognisable from that album. For example, the first Yellow Submarine album had just six songs with the rest of the album being orchestral pieces by George Martin. In contrast, this compilation album features all but one of the songs in the film of the same name.

The “Yellow Submarine Songtrack” album came about as a result of the re-release of the ‘Yellow Submarine Film’. Obviously the release corresponds with the 30th anniversary of that original movie. The difference being the inclusion of many more songs which basically addresses the let-down of its predecessor. You can also listen to snippets of all the songs on this new album by clicking the play button in the top right.

Not only that, but Peter Cobbin was responsible for the remastered tracks this time around. Indeed, remixing the original multitrack tapes at Abbey Road, Cobbin was to give us a new experience from the previous album. Although the album is a classic and well worth having, just remember that all the songs are available on other albums.

Obviously, we get the yellow submarine which takes up over one third of the sleeve. The majority colour is blue which represents the sea, of course. However, gone are all the characters from the film. Instead, we just get the name of the film. Although The Beatles name doesn’t really need to be on the cover, it is there all the same.

All in all, the new cover does its job perfectly. In the first place, gone is the heady psychedelic style and in comes a more modern approach. In reality, the album cover needs nothing more than this. 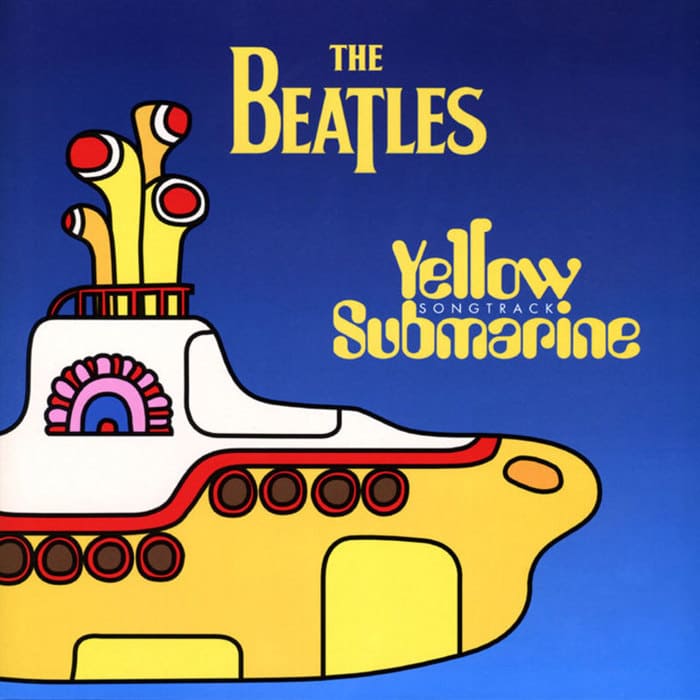 Many people still own the original “Yellow Submarine” album, of course. However, Beatles fans just had to get hold of this album because it represents the film far better. Together with it being remixed and remastered, there was plenty of interest. So its not surprising that it reached the top 10 in many countries including the number 8 slot in both the UK and Australia.

On its initial release, fans could also buy the CD/DVD package. That collection contained this album, the film together with the original mono soundtrack from 1968. Therefore, by grabbing that package, you could cover almost all of the whole Yellow Submarine project!

Of course, with the release being in 1999, the album was a CD release. However, there was a yellow LP version as well. As a result, Beatlemaniacs would buy that too, just for keepsake. Although, some audiophiles still convince themselves that vinyl sounds better. But, that argument is for another day!