There’s some sad news coming from William Zabaleta that The Beatles audio engineer, Geoff Emerick has died. Zabaleta was Emerick’s manager and was on his way to pick him up when things started to go wrong. While chatting on the phone Emerick appears to hove dropped it. At that point, Zabaleta called the emergency services but, by then it was too late.

Zabaleta was on his way from Arizona to Los Angeles to pick up Geoff so they could transport some gold records and platinum plaques to our show in Tucson. He then says, “So Geoff suffered from heart problems for a long time. He had a pacemaker and when it’s your time, it’s your time. We lost a legend and a best friend to me and a mentor. That’s all I can say on the matter.

In short, Geoff Emerick leaves behind a great legacy. In fact, Emerick was the sound engineer on Beatles’ albums such as, “Sgt Pepper’s Lonely Hearts Club Band“, “Revolver” and “Abbey Road“. Obviously, with that pedigree Emerick was a star. Emerick also worked with Kate Bush, Elvis Costello and Ultravox

Paul McCartney also had a few words to say, “Geoff had a sense of humour that fitted well with our attitude to work in the studio and was always open to the many new ideas that we threw at him. He grew to understand what we liked to hear and developed all sorts of techniques to achieve this. He would use a special microphone for the bass drum and played it strategically to achieve the sound that we asked him for. We spent many exciting hours in the studio and he never failed to come up with the goods.”

George Martin’s son says, “RIP [Emerick] one of finest and most innovative engineers to have graced a recording studio. I grew up with him as he worked so much with my father (George Martin). He helped create on the greatest music ever recorded.” 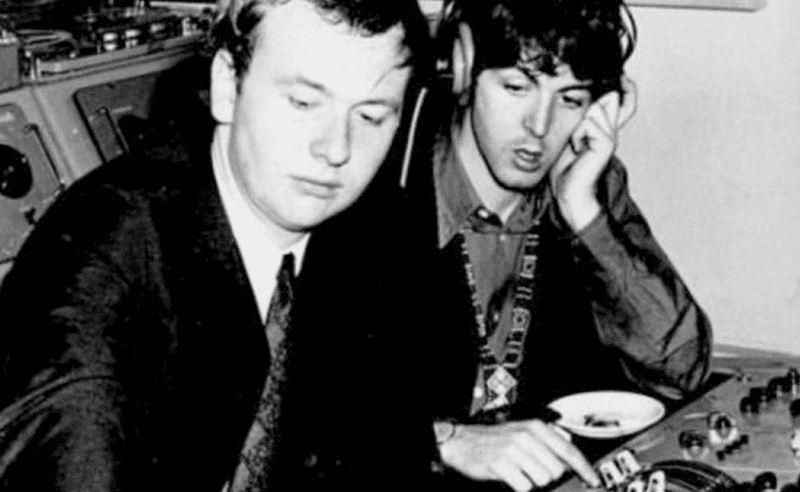 Geoff Emerick with Paul McCartney in the recording studio

2 Responses to Geoff Emerick Has Died