Paul McCartney made a surprise visit to his native home town of Liverpool and then gave us all a treat. Indeed, he and James Corden performed something special which will go down in history. Moreover, the Paul McCartney Carpool Karaoke, which is on YouTube, looks like it will be one of the most viewed.

In general, those James Corden carpool videos are around 10-15 minutes long. However, the Paul McCartney Carpool Karaoke is nearly 24 minutes. In fact it is like a mini documentary! Not only did we see Paul McCartney enjoy himself, but we saw the places he sang about in his songs.

So, the video starts with James Corden reciting the lines to The Beatles’ song, Help! Then into the car pops Sir Paul McCartney. From here we travel around Liverpool singing Beatles’ songs, of course the first one had to be Drive My Car. Then they compare their first songs which they wrote which is really funny.

They then drive along the real Penny Lane, singing it accordingly. But then they stop in Penny Lane and Paul autographs a street sign. Paul McCartney points out St Barnabas’ Church where he was in the choir, while James says “thank God for that choir, the voice its given us”. Then Paul points to the roundabout “That’s where the nurse was”. 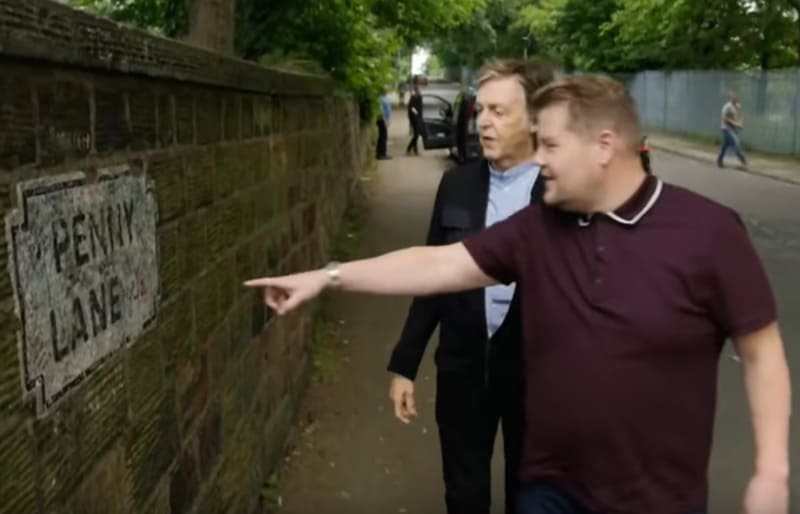 Of course, they couldn’t visit that area without popping into the barbers. What a shock the hairdresser got when Paul says, “Can we come in your shop, love”.

After leaving Penny Lane, Paul then reveals how the song, ‘Let It Be‘ came to him. Of course they sing it after this. But what happens next is amazing, James breaks down in tears. A touching moment is when James says, “If my granddad was here right now, he’d get an absolute kick out of this.” Paul replies, “he is” and there is a special momentary pause in which to ponder.

They travel further and get to 20 Forthlin Road where Paul McCartney wrote many early Beatles’ songs. The house has protection from the National Trust who market the house as “the birthplace of the Beatles”. So, unlike when the council allowed the deplorable situation with the destruction of the Cavern Club, maybe this gem will survive. After all, this small terraced ex local authority property was the home to a man who changed the world.

Inside 20 Forthlin Road we get an idea of how he and John Lennon would nurture their talents. The house has furnishings in a style similar to when Paul was growing up. Paul then explains another funny story behind, ‘She Loves You‘ and another about ‘A Day In The Life‘.

Paul continues to the bog which was his ‘acoustic chamber’, and sings a song, “everything sounds better in the bog” which sets James off laughing. Before they leave 20 Forthlin Road they sing a song together with Paul on the piano, ‘When I’m Sixty-Four‘. 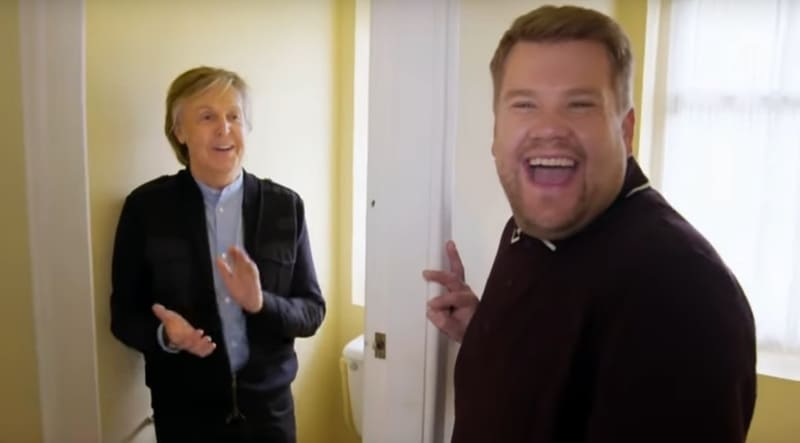 Paul McCartney, being a sport, surprises a even more locals down the pub he once played years ago. The pub is quiet and everyone is chatting away, then the opening chord of ‘A Hard Day’s Night‘ begins. The curtains open and there is the Liverpool legend himself, can you imaging having a shock like this at your local? In short, the reaction to the messiah’s presence is amazing and spontaneous.

Obviously news gets out that Paul McCartney is there and the pub allows a few more people in. The impromptu concert continues and not surprisingly everyone has a good day. In fact, one which they AND us will never ever forget.

As well as “A Hard Day’s Night”, we get to see Paul sing, ‘Ob-La-Di, Ob-La-Da‘, “Love Me Do” and ‘Back In The USSR‘. The show concludes with both Paul and James singing ‘Hey Jude‘.

Summing Up The Video

Had this video been any longer it could easily be a documentary, in fact, in a way, it is. It would be great for them to actually go back and make something similar, but a lot longer. The Paul McCartney Carpool Karaoke really is so amazing. It allows others to see what an absolute legend he is, of course we already know! 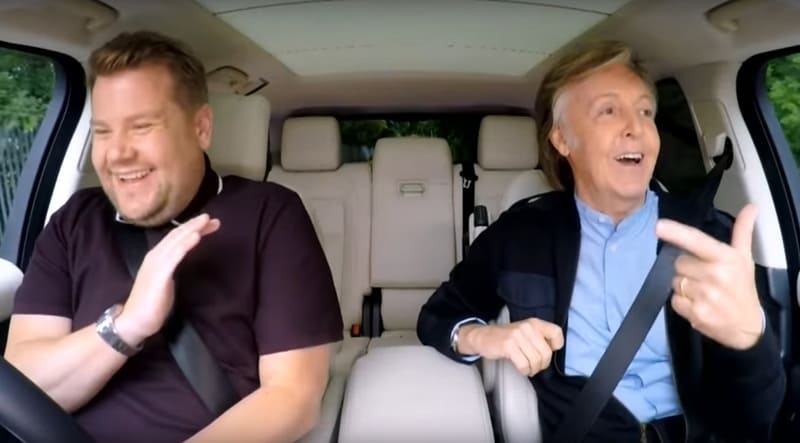