Paul McCartney’s school exercise book sells for £46,800 at an auction at Newton-le-Willows, Merseyside. Indeed, the event, which was auctioning Beatles’ memorabilia, including Paul McCartney‘s school book, was a success. However, a George Harrison cassette did not sell at all. This cassette had the title of ‘The Hitler Tapes’ and had some unheard tracks on it. The tracks included, “Spoken Intro George Legs Harry” and “Brazil 1,2 & 3”. Knowing The Beatles’ humour, this was obviously a little dig from George.

John Lennon’s gold rimmed glasses sold for £9,600 while a suit which John Lennon once wore sold for £4,800. So, someone has really got a bargain there.

Of course there was a lot of interest in this collection of Beatles’ memorabilia. There was even a street sign from Abbey Road which brought in £4,800. Furthermore, a brick from the Cavern Club sold for £420. There was also a Quarrymen business card someone got for a whopping £3,600. One other item to note which didn’t sell was a poster with a price tag over £8,000.

Obviously, most interest was in Paul McCartney’s school book. Paul’s book was that from his English Literature lessons at Liverpool Institute High School for Boys. This book has 22 pages of essays including Paul’s thoughts in writing about Thomas Hardy’s novel ‘The Return of the Native’ and John Milton’s epic poem ‘Paradise Lost’ and others.

Paul’s book also had many doodles including a man smoking a cigarette. But it also has some criticism of his teacher, Alan Durband who had the nickname ‘Dusty’. Be that as it may, Paul still managed to get a grade B- to B++.

There were two people who went into a bidding war which lasted 15 minutes. However, there had to be one lucky winner. But the bidding war ensured that the book sold for a massive £46,800. So, the winner has some works of Paul which date back to 1959/60, well before The Beatles became a household name. 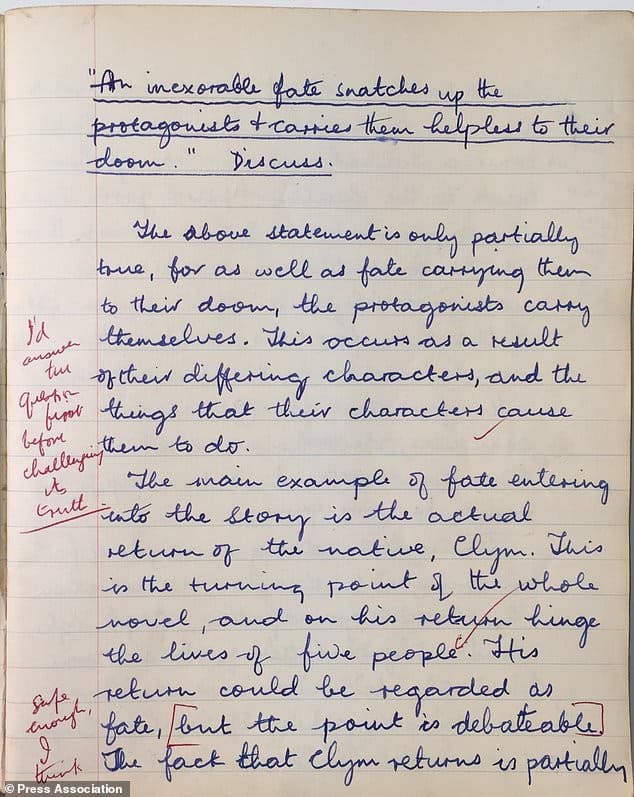