Better late than never, at the age of 77, Ringo Starr attended Buckingham Palace with his wife, Barbara Bach. There he then became a knight after a ceremony with Prince William. Due to his services to music, he receives the award and says, “It means a lot actually. It means recognition for the things we’ve done. I was really pleased to accept this. I’ll be wearing it at breakfast.”

In short, Ringo heard the news about his honour months ago in the Queen’s New Year’s honours list.

So there we have it, Ringo Starr Receives a knighthood and we should all be happy for him. It’s been a long and winding road for Ringo, indeed read his story here and weep. However, he should serve as an example of how we all have a purpose in life. Without doubt, Sir Ringo Starr even gave people a purpose in life with his contribution to the world of entertainment.

Read more at the Daily Mail. 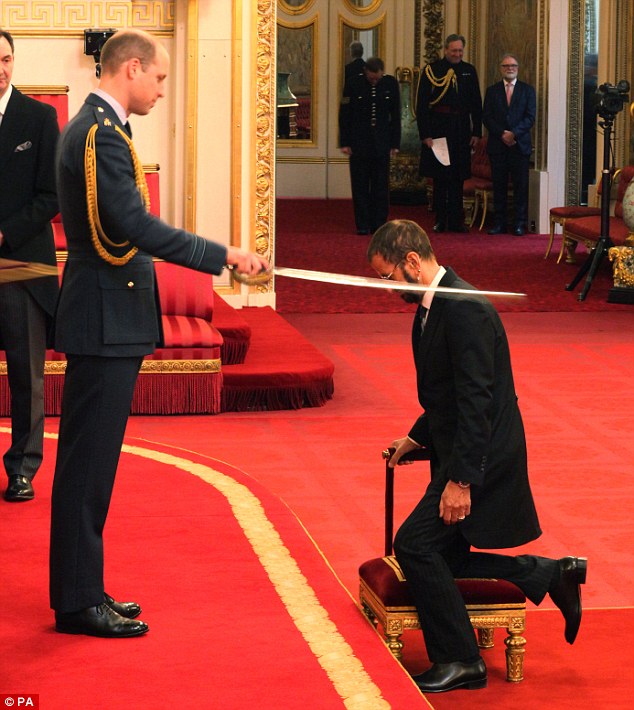 Finally, make a comment here or in the massive Beatles Forum. The ex-Beatles’ drummer has had a fruitful life and so there is lots to talk about. We wish Ringo all the best for the future and long may he continue to bring happiness to peoples lives.

Our massive Beatles Bulletin Boards are the biggest and best ones available on the internet. There was never a dull moment with the Fab Four and there is so much to talk about. Therefore pop over to the message boards and chat about the best band that the world has ever known.