Sir Paul McCartney Made a Companion of Honour

Indeed, it has been twenty years after The Queen knighted Paul McCartney. However, he now has a new award and that is the title of Companion of Honour. These awards are for service of conspicuous national importance and Paul McCartney certainly is just that. Moreover, the award is for people who have made a major contribution to the arts, science, medicine, or government. Therefore, his honour is for services to music.

Paul attended Buckingham Palace with his American wife, Nancy Shevell, to receive his Companion of Honour award from Her Majesty. It is a title which also allows Paul to use the letter CH after his name.

Speaking about the honour, Paul says, “I’m very happy about this huge honour, and with the news coming on my birthday weekend and Father’s Day, it makes it colossal!”

Of course, Sir Paul McCartney gladly accepted his new honour from Her Majesty. Indeed, meeting The Queen is becoming a regular occurrence for Paul and it certainly looks like they know each other.

In essence, at any one time there can only be 65 members and at the moment there are 62 (2018). So, Sir Paul McCartney makes this list. Of course non-British nationals can make attain the honour. But, they are additional to the main list. 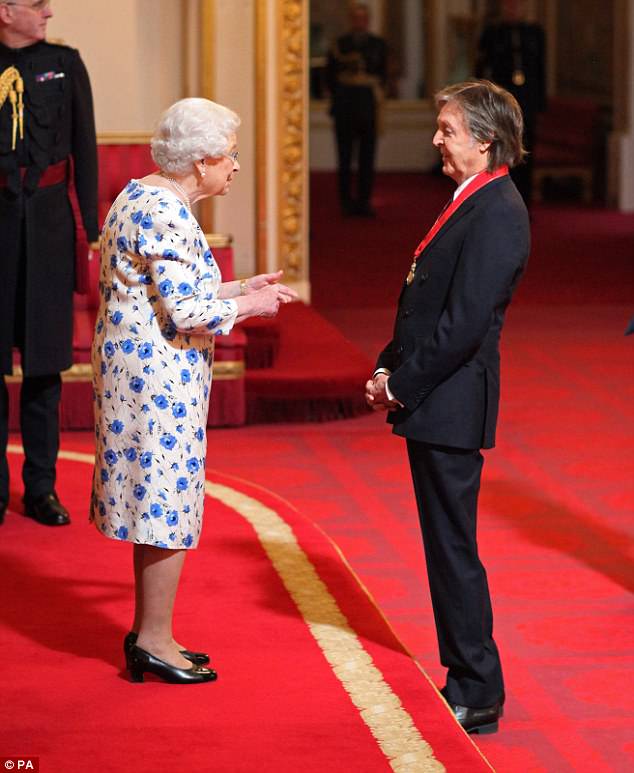 More of this story can be read in The Daily Mail

Finally, Sir Paul deserves his new honour and we wish him well. You can comment here about this article, of course. However, we also have a massive Beatles Forum to discuss everything about Sir Paul McCartney. So, pop over and make a new thread or two about the ex singer of the best band ever.

Since The Beatles Forum covers all aspects of the Fab Four, we hope that you become a regular on our massive message boards. There is so much to talk about and we welcome all Beatleheads!