The Beatles obviously have two successful films under their wing with “A Hard Day’s Night” (1964) and “Help!” (1965). However, in 1967, The Fab Four make a new movie, the “Magical Mystery Tour” film. But, this was to be a sort of a flop unlike the album of the same name which topped the charts. Of course, the original release of these songs in the UK was on a double EP with 6 songs. While in the US, that release was an album with 11 songs. 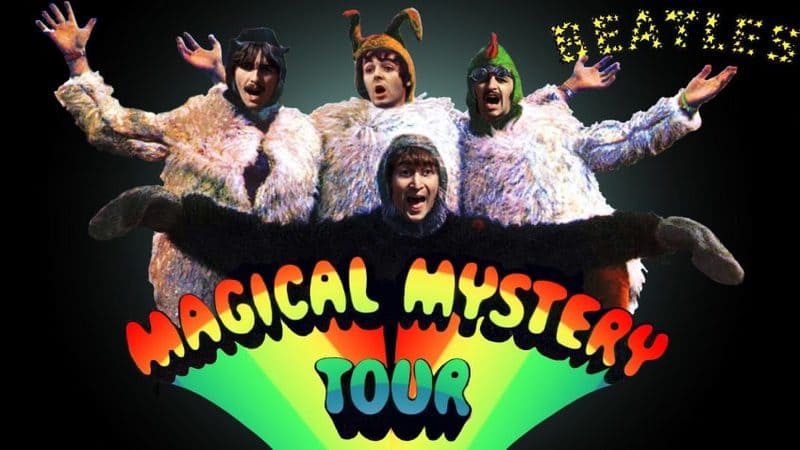 As the name suggests, this film is about The Beatles embarking on a mystery bus ride together with many other passengers. It becomes obvious once you see the film that it’s a surreal, comedy television film. The BBC screened the film on Boxing Day in 1967 so families could settle in front of the TV after a hectic Christmas. However, unlike their classic first two films, the “Magical Mystery Tour” film didn’t quite work out well.

To begin with, the film appeared to have no plot. In fact, the film was confusing for many people. Because of this, the movie suffered badly at the hands of the critics. But, it still holds some historic value because of the evolving Beatles’ music.

The majority of filming took place between the 11th September and the 25th September, 1967 but the editing took 11 weeks. In short, they had to whittle down 10 hours of footage to 52 minutes for television purposes.

The Magical Mystery Tour Film came from an initial idea which Paul McCartney had although he says it was a “collective thing”. It was a project in which they were to combine the free-wheeling fun of Ken Kesey’s 1964 cross-country American bus tour aboard “Further” together with the Merry Pranksters and the coach trips from Liverpool to see the Blackpool illuminations.

While on the mystery tour “strange things begin to happen”. This is because of the “four or five magicians” were instigating things. The four Beatles play the part of the magicians and the fifth one was the band’s long-time road manager, Mal Evans. Of course, even though the film was a bit of a flop, the music was certainly not. Hence a very successful soundtrack album by the same name.

Songs In The Film