The 1968 Yellow Submarine Film is an animated, musical fantasy comedy inspired by the music of The Beatles, of course. Moreover, the film provides a soundtrack for an album of the same name. However, be aware that there are two Yellow Submarine albums.

Back to the Yellow Submarine Film, which is still as fresh today as it was in 1968. In fact, this film is a joy for both young and old to watch. After the relative flop of “Magical Mystery Tour” film (the album was a massive success by the way), this animated film adds a new dimension to things. But more importantly, we get The Beatles’ music which elevates this animated film up to great heights.

In 1999, using restoration techniques at the time, they released the Yellow Submarine film on DVD with Dolby 5.1 sound. Then, in 2012, they restored the film yet again, but this time by hand.

To begin with, Pepperland is an extremely nice place to be. Indeed, it’s a paradise under the seas for the music loving Pepperland residents. The area also comes under the protection of Sgt. Pepper’s Lonely Hearts Club Band.

The Yellow Submarine sits in retirement on a hill which resembles a pyramid. 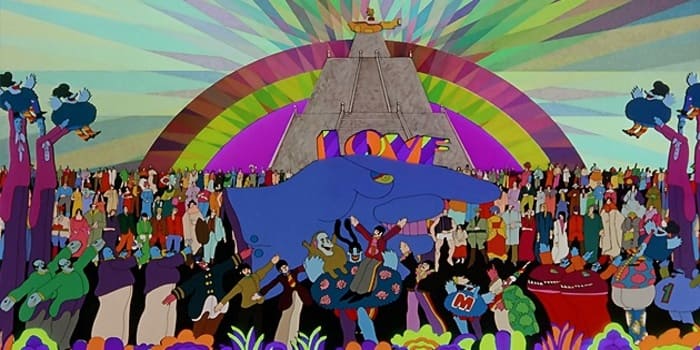 Meanwhile, the Blue Meanies who live just on the outskirts over the blue mountains under the sea, hate music and attack Pepperland. Their attack, with arrows and green apples, soon drains the seascape of its colour. They imprison the band in a music-proof globe while all the other Pepperlanders become statues and are subject to torture.

However, before capture, Pepperland’s elderly Lord Mayor sends Old Fred, an ageing sailor, to get some help. Fred manages to reactivate the Yellow Submarine and travels to Liverpool in search of the Fab Four, of course. While Old Fred is in Liverpool, he persuades The Beatles to come back to Pepperland with him to help out. But first, they have to learn how to master the Yellow Submarine.

So, will The Beatles be victorious and defeat the music-hating Blue Meanies? Obviously they do and they do it through their music.

01) Sea of Time: where time flows both forwards and backwards to the tune of “When I’m Sixty-Four”.
02) Sea of Science: where they pick up a monster.
03) Sea of Monsters: where the sinister “vacuum cleaner monster” sucks up stray objects, creatures, the entire landscape, and finally swallows itself which puts the submarine into an empty void.
04) Sea of Nothing: This is a blank region where they meet Jeremy Hillary Boob Ph.D. (‘Phud’), a helpful ally to The Beatles, who sing “Nowhere Man” in reference to him. As they leave, Ringo Starr feels sorry for the lonely “Nowhere Man” so he invites him to join them aboard the submarine.

05) Foothills of the Headlands: where Jeremy and The Beatles are separated from both the Submarine (and Old Fred) and where John sings “Lucy in the Sky with Diamonds”. Pepper (foreshadowing that Pepperland is yet to come) makes the living beings in the Headlands sneeze. This of course blows The Beatles and Jeremy into the Sea of Holes.
05) Sea of Holes: Here, Jeremy is kidnapped by one of the Blue Meanies guarding the outskirts of Pepperland. Ringo Starr checks one of the many holes and puts it into his pocket. While searching for Jeremy, Ringo then jumps onto a green hole. The Sea of Holes now turn into the Sea of Green.
(07) Sea of Green: The group now arrive in Pepperland while Old Fred follows in the Yellow Submarine.

Obviously, The Beatles have much more new music in this film. Since The Beatles are constantly evolving and reinventing music, the Beatlemania and Merseybeat music is disappearing into the distance. However, we now move into more creative days. Hence the newer Beatles music in this Yellow Submarine Film. Indeed, we are now moving into the psychedelic pop era with everything that has on offer!

Tracks In The Yellow Submarine Film

01) Introduction Story and music by George Martin
02) Yellow Submarine
03) Eleanor Rigby
04) Love You To
05) A Day in the Life
06) All Together Now
07) When I’m Sixty-Four
08) Only a Northern Song
09) Nowhere Man
10) Lucy in the Sky with Diamonds
11) Sea of Green
12) Think for Yourself
13) Sgt Pepper’s Lonely Hearts Club Band
14) With a Little Help from My Friends
15) All You Need Is Love
16) Baby, You’re a Rich Man
17) Hey Bulldog (in the film’s 1999 restoration)
18) It’s All Too Much
19) All Together Now – real images of The Beatles singing, with translation of the words “All Together Now” in many different languages.
Tagged Foothills of the Headlands, Jeremy Hillary Boob, Music-proof globe, Old Fred, Pepperlanders, Psychedelic pop era, Sea of Green, Sea of Nothing, Sea of Science, Vacuum cleaner monster, Yellow Submarine Film. Bookmark the permalink.