This article is about British entrepreneur, Brian Epstein, who was manager of The Beatles. Indeed, it was Epstein who saw the raw talent and potential of the Fab Four in their early days. Then, with his enthusiasm, determination and promotion of the young starlets, he ensured the band’s success. Of course, we all profited from his hard work in a big way!

Brian was born on the 19th September 1934 at number 4 Rodney Street, Liverpool, England. He obviously had an eye for spotting talent and his influence on the music scene in the 1960s is legendary. However, he died from an accidental drug overdose (sleeping tablets) on the 27th August 1967 at the young age of 32. Had he survived, then maybe he could have helped The Beatles through their problems to keep them together as a band. 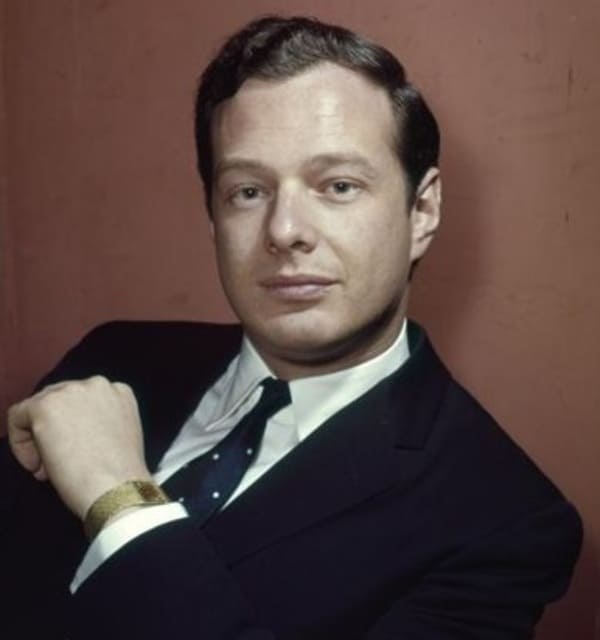 Brian was born to Harry and Malka (nickname of Queenie) who were successful retailers and he had a younger brother, Clive. The family moved further up the coast to Southport during World War II. While in Southport, two schools expelled him because of laziness and poor performance. In 1945, the family moved back down to Liverpool. There they took up residence at 197 Queens Drive, Childwall, where they remained for the next 30 years.

His parents wanted to ensure Brian had an education so they sent him to numerous boarding schools. One of those was Wrekin College in Shropshire, England where he learned to play the violin. However, Harry thought Brian was heading in the wrong direction. This was because Brian explained that he wanted to become a dress designer.

The family were into retail and owned a few outlets, so they summoned young Brian to work in their furniture shop. Then in 1952, he got his conscription papers and had to do his national service based in London. Shortly after serving his time and back in Liverpool, he confessed to a family friend, who was also a psychiatrist, about his homosexuality. He also expressed a desire to become an actor. So, his father sent Brian back to London where he went to the Royal Academy of Dramatic Art (RADA). However, he left saying he felt he was “too much of a businessman to enjoy being a student.”

On his return to Liverpool, his father put him in charge of the record section of their newly opened music shop, NEMS. Brian worked tirelessly and his hard work ensured that the shop was a massive success. So much so that it became the biggest music store in the north of England.

Impressed with the success of the store, the family opened a new music store. Brian then became manager of that whole operation. Around this time he met Peter Brown who worked in nearby record outlet at a department store. Brian, impressed by Peter’s sales technique, lured him to work for NEMS.

Later, The Beatles would have access to many records in the shop, some of which never charted. This allowed The Beatles to make cover versions of obsolete songs or B-sides to other songs.

Brian Epstein was aware of The Beatles after seeing them in of a local fortnightly paper called Mersey Beat. Furthermore, he would see them on many posters and he was becoming more curious about the band. Then when a customer, Raymond Jones, requested a copy of their recent recording, “My Bonnie“, Epstein wanted to learn more about them. Of course, at the time, the band members were, John Lennon, Paul McCartney, George Harrison with Pete Best being the drummer.

On the 9th November 1961, The Beatles were due to play a lunchtime gig at the local Cavern Club on Mathew Street. Epstein arranged to see the gig with his personal assistant, Alistair Taylor. Obviously, they had a smooth entry without queueing after contacting the Mersey Beat. The DJ proudly announced, “We have someone rather famous in the audience today, Mr Brian Epstein, the owner of NEMS.

After the gig, Epstein explained that he liked their music, the beat and their sense of humour while on stage. After briefly visiting The Beatles in their dressing room, Epstein and Taylor went for their lunch at a local restaurant.

While Brian Epstein was was full of praise for the band Alistair wasn’t. Although Alistair said they were “absolutely awful”, he also said that there was something “remarkable” about them. Epstein replied, “Do you think I should manage them?”

Over the next few weeks Epstein would often see The Beatles perform at the Cavern Club. Soon, he contacted The Beatles’ ex-manager, Allan Williams, to enquire about the band. Williams told Epstein to steer clear of them after the band refused to pay him while they were gigging in Hamburg.

Brian Epstein wanted to manage The Beatles so arranged a meeting in the NEMS. None of the band members turned up on time to Epstein’s dismay. Paul McCartney’s excuse was that he was having a bath while the others were too busy drinking in the pub. Upon Paul’s appearance, George Harrison wittingly said, “He may be late, but he’ll be very clean”. We are to hear a similar phrase in the film “A Hard Day’s Night” (1964).

There would be further meetings on the 6th and 10th December 1961. Then finally, The Beatles signed a 5 year contract on the 24th January, 1962 which would give Brian Epstein between 10 to 15% of their income. However, they signed a new contract in October of the same year increasing Epstein’s share. But this was conditional upon how much effort Epstein put in to help the band succeed. 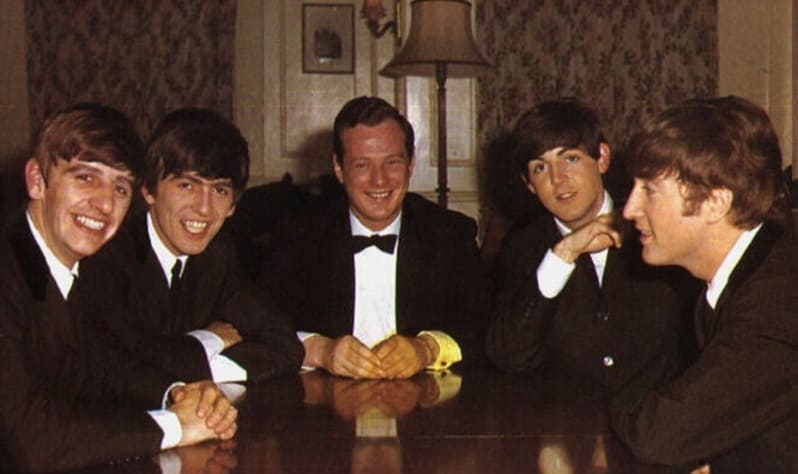 Brian Epstein was a businessman, who had a big car and wore smart suits. In contrast, The Beatles wore leather jackets and jeans. In order to create a new image, Epstein encouraged the band members to smarten up. Under Epstein’s guidance, they were to wear suits and ties and their bad habits had to stop while performing. Those habits were swearing, smoking, drinking and eating on stage. Epstein convinced them that those traits were not suitable and would put people off. Epstein also suggested the famous synchronised bow which become one of their trademarks.

Obviously, another of The Beatles’ professional trademarks was their hairstyle which got the name moptop. Indeed, many people referred to The Beatles as Moptops. But they also had the name of The Fab Four. Together with their terrific music, humour and trademarks like this, they were always going to be massive stars.

In order to secure a recording contract, Epstein travelled to London to visit the big record companies. One of those companies, Decca, rejected the audition tapes. Indeed, many consider this to be one of the biggest mistakes in music industry history.

The determination of Brian Epstein led him to EMI and a meeting with George Martin That meeting took place at EMI’s Abbey Road Studios, London on the 9th May 1962. Without seeing or hearing The Beatles live, Epstein won a contract with EMI. However, that deal was very poor offering only one penny for each recording sold. In effect, EMI had nothing to lose. Since most record companies rejected The Beatles, this contract was better than nothing.

George Martin was not happy with drummer, Pete Best, so he brought in a session drummer. This was during the first recording session on the 6th June, 1962. The rest of the band thought it would be better to replace the drummer should they wish to do this. So, under instruction from band members, He sacked the original Beatles drummer, Pete Best.

This led to many protests by the fans as Best was a popular character, especially at the Cavern Club. Indeed, Epstein even brought in a temporary bodyguard after the protesters targetted his car. During one of these protests George Harrison suffered a black eye.

John Lennon thought Ringo Starr would be a good replacement and he already invited Ringo to join. Indeed, Ringo would play with The Beatles on occasions when Best was absent.

Together with the more than capable producer, George Martin, Brian Epstein put together the final piece of the jigsaw. From then on, nothing was to stop The Beatles from quickly rising to stardom.

Brian Epstein died alone on the 27th August 1967 aged 32. His butler didn’t get an answer when he knocked on Brian’s bedroom door. The housekeeper called in the police after having raised concerns. He had taken six Carbitral tablets (sleeping pills) however he had also been drinking and this combination proved fatal.

Peter Brown later said he discovered a suicide note that Epstein once wrote. There was also a will in which Brown was a minor beneficiary. Brown confronted Brian who told him to keep it quiet which he did. However, Brown later says that he wished that he raised concerns with Brian’s doctor.

In order to keep the press at bay and leave the family to grieve privately, The Beatles didn’t attend Epstein’s funeral. However, they did attend a memorial service for Epstein on the 17th October. This service was at the New London Synagogue in St John’s Wood (near Abbey Road Studios). However, his final resting place is in the Kirkdale Jewish Cemetery, Liverpool.

There has been much debate whether Brian Epstein or George Martin could have the title of the Fifth Beatle. Indeed, Paul McCartney has referred to both as such.

The Beatles broke up in 1970 but while recording the “White Album” in 1968, it became obvious that all was not quite right and the band was fragmenting. We will never know, but had Brian Epstein survived, he may have been able to keep the band together. What a thought!

One Response to Brian Epstein