Stuart Fergusson Victor Sutcliffe (23 June 1940 – 10 April 1962) became the original bassist for The Quarrymen, aka The Beatles.

Born in Edinburgh but raised in 37 Aigburth Drive, Liverpool, he attended the same art college as John Lennon. In fact, the Liverpool College of Art is where both students met for the first time.

While in his first year at the art college, Sutcliffe worked as a bin man for Liverpool Corporation. But, art was becoming an important part of his life. He then moved into a flat in Hillary Mansions at 3 Gambier Terrace, where Margaret Chapman lived. Indeed, they both also competed to become the best painter in class. 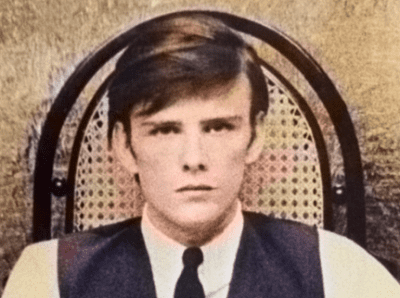 Meanwhile, John Lennon, who wasn’t too good at art, moved into the flat with Sutcliffe in early 1960 and he became friends with the rest of The Quarrymen.

“Paul and I got to know Stuart Sutcliffe through going into the art college. Stuart was a thin, arty guy with glasses and a little Van Gogh beard; a good painter. John really liked Stuart as an artist. Stuart obviously liked John because he played the guitar and was a big Ted. Stuart was cool. He was great-looking and had a great vibe about him, and was a very friendly bloke.

I liked Stuart a lot; he was always very gentle. John had a slight superiority complex at times, but Stuart didn’t discriminate against Paul and me because we weren’t from the art school. He started to come and watch us when we played at parties and he became a fan of ours. He actually got some parties for John, Paul and me to play at.”

Stuart Sutcliffe would soon receive an invite from John Lennon to join The Quarrymen after Sutcliffe received a windfall. This came from one of his paintings (The Summer Painting) which sold for £65 while on display at the biennial John Moores exhibition at Liverpool’s Walker Gallery between November 1959 and January 1960. John Moores was a successful local businessman and he bought the painting himself.

“What do you do with £65? We all reminded him over a coffee: ‘Funny you should have got that amount, Stuart – it is very near the cost of a Hofner bass.’ He said, ‘No, I can’t just spend all that.’ It was a fortune in those days, like an inheritance. He said he had to buy canvases or paint. We said, ‘Stu, see reason, love. A Hofner, a big ace group… fame!’ He gave in and bought this big Hofner bass that dwarfed him. The trouble was he couldn’t play well. This was a bit of a drawback, but it looked good, so it wasn’t too much of a problem.

When he came into the band, around Christmas of 1959, we were a little jealous of him; it was something I didn’t deal with very well. We were always slightly jealous of John’s other friendships. He was the older fellow; it was just the way it was. When Stuart came in, it felt as if he was taking the position away from George and me. We had to take a bit of a back seat. Stuart was John’s age, went to art college, was a very good painter and had all the cred that we didn’t.”

Both Lennon and Sutcliffe later invented the name “Beetles”. This evolved from their liking of Buddy Holly’s band, “The Crickets”. However, Lennon toyed with many names and would soon change this to “The Beatles” which come from the word “beat”.

“It was John and Stuart who thought of the name. They were art students and while George’s and my parents would make us go to bed, Stuart and John could live the little dream that we all dream: to stay up all night. And it was then they thought up the name.

One April evening in 1960, walking along Gambier Terrace by Liverpool Cathedral, John and Stuart announced: ‘Hey, we want to call the band The Beatles.”

Despite being a decent artist, Sutcliffe wasn’t a natural musician but he was quick to learn. Be that as it may, it was always a case of catch-up for him within the band.

“He wasn’t really a very good musician. In fact, he wasn’t a musician at all until we talked him into buying a bass. We taught him to play twelve-bars, like Thirty Days by Chuck Berry. That was the first thing he ever learnt. He picked up a few things and he practised a bit until he could get through a couple of other tunes as well. It was a bit ropey, but it didn’t matter at that time because he looked so cool. We never had many gigs in Liverpool before we went to Hamburg, anyway.”

During their time in Hamburg, Sutcliffe became a popular member of the band and his rendition of Elvis Presley’s “Love Me Tender” would often get the loudest cheer of the night. Then he soon began dating Astrid Kirchherr**.

“Just recently I have found the most wonderful friends, the most beautiful looking trio I have ever seen. I was completely captivated by their charm. The girl thought I was the most handsome of the lot. Here was I, feeling the most insipid working member of the group, being told how much superior I looked – this alongside the great Romeo John Lennon and his two stalwarts Paul and George: the Casanovas of Hamburg!”

** Astrid Kirchherr was previously with Klaus Voormann but their personal relationship was dwindling at the time. Of course, Voormann became a good friend of The Beatles after he took an interest in their performances. He went on to design the covers for the “Revolver” album in 1966 as well as the “Anthology” albums 30 years later! 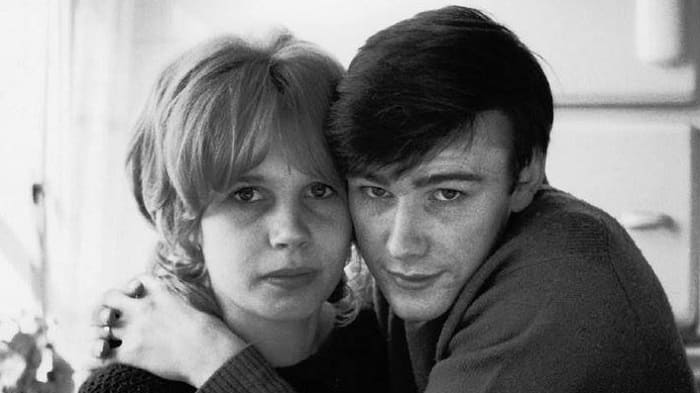 The earlier jealousy between Paul McCartney and Stuart Sutcliffe was to resurface resulting in a fight onstage. John Lennon seems to recall the fight being over Astrid Kirchherr:

“Paul was saying something about Stu’s girl – he was jealous because she was a great girl, and Stu hit him, on stage. And Stu wasn’t a violent guy at all.”

“Stuart and I once actually had a fight on stage. I thought I’d beat him hands down because he was littler than me. But he was strong and we got locked in a sort of death-grip, on stage during the set. It was terrible. We must have called each other something one too many time: ‘Oh, you…’ – ‘You calling me that?’ Then we were locked and neither of us wanted to go any further and all the others were shouting, ‘Stop it, you two!’ – ‘I’ll stop it if he will.’”

Although Sutcliffe was fashionable and good-looking, he wasn’t fitting in with things. It was also becoming clear that while Lennon, McCartney and Harrison got along fine, the newer members were causing friction. Not only was Stuart Sutcliffe causing discord but so was the new drummer, Pete Best. Indeed, the band sacked Best two years later when Ringo Starr joined them to become the Fab Four.

Sutcliffe moved into the Kirchherr family’s home after Astrid and he became engaged during November 1960. Here, he became interested in her clothing and would often borrow her leather pants and jackets, collarless jackets, oversized shirts and long scarves. Indeed, his artistic mind was working overtime on the fashion front. Moreover, his fiancee would help with their early image prior to the influence of Brian Epstein during 1962.

The band needed to return to Liverpool in late 1960 because McCartney and Harrison were subject to deportation orders. The German police charged Paul McCartney with arson for setting light to a condom on the wall of their old digs but there was no real damage. Meanwhile George Harrison was under the legal age to work there.

When the band returned back to Hamburg in 1961, the influence Sutcliffe and Kirchherr had upon the band was noticeable. Kirchherr met them at the train station wearing leather trousers and jacket. Highly impressed, Sutcliffe soon followed her trend and so did the rest of the band.

However, when Kirchherr cut Sutcliffe’s hair, the initial effect had John Lennon collapsing in a fit of laughter. But when George Harrison got Kirchherr to give him a similar style haircut, another trend followed. Only Pete Best refused to have what evolved into the “Beatle Cut”.

“All my friends in art school used to run around with this sort of… what you call Beatles haircut. And my boyfriend then, Klaus Voormann, had this hairstyle, and Stuart liked it very, very much. He was the first one who really got the nerve to get the Brylcreem out of his hair, and asking me to cut his hair for him.”

Not only was The Beatles’ music evolving but it is clear that Sutcliffe and his partner had a say in their image. The Beatles later took on the nicknames of the Fab Four and the Mop Tops, the latter being a reference to their hairstyles. However, despite the flamboyant couple’s influence, Sutcliffe was basically just tagging onto the band by the end of 1960. In effect, he was no longer a full member of the band. By July 1961, it was all official and he was no longer a band member, but he still remained close to the others.

Although Sutcliffe still enjoyed time with The Beatles in Germany, he continued studying at the Hamburg College of Art. Again, he won praise for style in abstract expressionism. However, he began to get headaches and became sensitivity to light. During a class in April 1962, he actually collapsed.

The German doctors were unable to offer any reason why he was suffering. On the 10th of April he collapsed again but this time he died on the way to hospital in an ambulance.

“He died in my arms on that journey. I cannot say it was unexpected but the suddenness… the loss to me was great, and to anyone who knew him, because he was a genius, with a great mind and an original talent as an artist. He would have been outstanding, if he’d lived.”

The cause of his death was due to severe bleeding in his brain’s right ventricle. In essence, this was down to a brain hemorrhage which they failed to catch earlier. Brian Epstein escorted Sutcliffe’s mother to Hamburg in order to return to Liverpool with the body.

Stuart Sutcliffe did receive a head injury in a fight after a performance in Liverpool during January 1961. Lennon and Best came to his aid that day but he suffered a fractured skull. However, he refused treatment and never followed things through. Whether this was the ultimate cause of his brain hemorrhage, we may never know.