To begin with, “A Hard Day’s Night” is a Beatles’ song which appears on their 1964 album of the same name. It was a also very successful single. Not only that but it is the title of their debut film too.

Obviously, apart from the song being brilliant, the opening chord played by George Harrison is instantly recognisable. The song is about devotion to a lover despite working so hard that it wears the singer out. However, in return, the singer gets just as much back and feels it’s worth the effort.

Although John Lennon wrote the song, Ringo Starr thought up the title by pointing out that the band had been working all day and night. The band went with that and it was also the inspiration for their first film.

“We went to do a job, and we’d worked all day and we happened to work all night. I came up still thinking it was day I suppose, and I said, ‘It’s been a hard day…’ and I looked around and saw it was dark so I said, ‘…night!’ So we came to A Hard Day’s Night.”

Of course, Starr’s statement was correct. This is because in those heady days of Beatlemania their work rate was phenomenal.

“I was going home in the car and Dick Lester suggested the title Hard Day’s Night from something Ringo’d said. 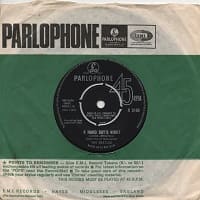 I had used it in In His Own Write but it was an off-the-cuff remark by Ringo. You know, one of those malapropisms.

A Ringoism, where he said it not to be funny, just said it. So Dick Lester said we are going to use that title, and the next morning I brought in the song. ‘Cause there was a little competition between Paul and I as to who got the A side, who got the hit singles.”

If you are about to make an entrance, make sure people notice you! The opening chord of “A Hard Day’s Night” does just that, it instantly grabs the attention of the listener. This was intentional because it was going to be the opening chord for the single, the album and the film.

George Harrison plays the “mighty opening chord” on his Rickenbacker 360/12 12-string guitar. Much debate about its composition has always raged with some going for G7add9sus4, while others go for G7sus4 or G11sus4. But many more combinations come to us from all sources so we may never know.

Online Question (15 February 2001): “Mr Harrison, what is the opening chord you used for ‘A Hard Day’s Night’?”
Harrison’s reply: “It is F with a G on top, but you’ll have to ask Paul about the bass note to get the proper story.”

Whatever the exact combination is, it certainly is effective. While this opening chord is extra special, there is an equally impressive closing chord on their 1967 song, “A Day In The Life“. That closing piano/harmonium chord lasts for and amazing 40 seconds.

Indeed, you could say that those two chords actually bookend a remarkable period during Beatlemania. This was when The Beatles were happy being around each other during the peak of their creativity.

Usually the writer sings the song, but because there are quite a few high notes, Paul McCartney needs to join in.

“The only reason he [McCartney] sang on Hard Day’s Night was because I couldn’t reach the notes. ‘When I’m home, everything seems to be right. When I’m home…’ – which is what we’d do sometimes. One of us couldn’t reach a note but he wanted a different sound, so he’d get the other to do the harmony.”

The Beatles began recording the “A Hard Day’s Night” song on the 16th April, 1964, in Studio Two of the EMI Studios, London, during the 10.00am-1.00pm session. This extra special song had to be right so with a lot of care and attention, they recorded 9 takes. Take 9 became the master track and after mixing, became the song that we are all familiar with.

The Beatles were a busy group in the early 1960s but they still found time to record programmes for BBC Radio. Indeed, they recorded the “A Hard Day’s Night” song for the “Top Gear” radio show airing on 16 July 1964. Because of this, that version is now available on their 1994 album, “Live At The BBC”.

Since the single reached number one in the charts, it is also on their 2000 album, “1”. On this album it is track 6 coming after “Can’t Buy Me Love” and before “I Feel Fine“.

The album was at number one in the UK for 21 weeks while the single stayed top for only 3 weeks. It also topped the charts in most countries too, including America, Canada, Australia and New Zealand. The B-side was, “Things We Said Today” in the UK but “I Should Have Known Better” in the US.

Beatlemania sent both the single and album to number one in both the UK and US simultaneously. This set a record of course and the song, “A Hard Day’s Night” has gone down in Beatles lore.