To begin with, The Beatles would perform the song, “Ain’t She Sweet” regularly in their early days together. Indeed, they would sing this between the years 1957 and 1962. Of course, in the late 1950s and early 1960s, the band had different personnel. They were also experimenting with various names for the band.

Being first recorded in 1961, this song became a single release in 1964 after The Beatles became famous. While “Ain’t She Sweet” is the A-side, the B-side is, “If You Love Me, Baby (Take Out Some Insurance on Me, Baby)”.

While The Beatles were in their early formation, they would perform cover and sing many old songs such as this one. In fact, this song is really old having its roots in the 1920s. 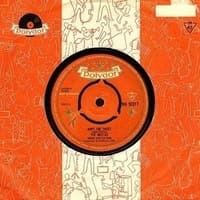 It is debatable whether John Lennon sang this with Gene Vincent’s 1956 version in mind or Duffy Power’s 1959 version. But, it looks like John Lennon was developing his own style while experimenting at the same time.

“Gene Vincent’s recording of Ain’t She Sweet is very mellow and high-pitched and I used to do it like that, but the Germans said, ‘Harder, harder’ – they all wanted it a bit more like a march – so we ended up doing a harder version.”

Be that as it may, the drummer on the 1961 recording is Pete Best. This is because Ringo Starr hadn’t joined the band yet. However, Starr does play the drums on a version from 1969.

While the band were in Hamburg, Germany, in the early 1960s, they had much involvement with singer Tony Sheridan. They were also the backing group for Sheridan when recorded this song. This was in late June, 1961, at Hamburg’s Studio Rahlstedt. Not only did they record this song, but they also recorded “Take Out Some Insurance On Me, Baby” and “Nobody’s Child” too. Back then, they had the name “Beat Brothers”, and this version is on their 1995 album, “Anthology 1”.

The Beatles also recorded a version on 24 July 1969, during a jamming session and this appears on their 1996 album, “Anthology 3”. They were busy recording “Sun King/Mean Mr. Mustard” for the long medley on side two of the “Abbey Road” album when for reasons unknown, they sang three Gene Vincent songs. Those were “Ain’t She Sweet”, “Who Slapped John?” and “Be-Bop-A-Lula” but the second two are not commercially available yet.