John Lennon wrote the song in 1962, but as usual, the arrangement gives credit to the Lennon-McCartney partnership.

“It was John’s original idea and we both sat down and wrote it together, just did a job on it. It was mostly John’s.”

Being one of their early songs, The Beatles would often perform this live, of course. However, the Fab Four were to move on very quickly once they won a contract with EMI in 1962. Indeed, this song is one of their first recordings at the Abbey Road Studios. But, the company destroyed the first master tapes from 6th June that year because they thought very little of them! Pete Best was the drummer at the time, of course. 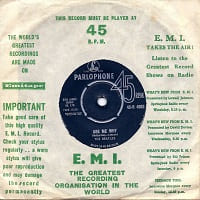 In November 1962, they did record the song again but this time Ringo Starr was on the drums. This version was good enough for The Beatles’ first album, “Please Please Me”. Not only that but “Ask Me Why” became the B-side on their second single, “Please Please Me”.

Smokey Robinson and the Miracles had some influence on John Lennon in the early days. In fact, “Ask Me Why” has a very similar opening guitar piece to their 1961 song, “What’s So Good About Goodbye”.

Obviously in their early days, The Beatles, just like other bands at the time, would take much influence from other sources. They must have really admired Smokey Robinson and the Miracles because they also covered their version of “You Really Got A Hold On Me” which is on their 1963 album, “With The Beatles”.

The Beatles recorded “Ask Me Why” for the second time on 26 November 1962, in Studio Two of the EMI Studios, London, during the 7pm-10pm session. There were 6 takes that day, and as per usual for the time, these would go in the bin once they had a successful mix.

The BBC were quick to see that The Beatles were hot property and would often feature them in various radio shows. Of course, The Fab Four, complete with their unique humour, jumped at the chance of free publicity.

They also sang “Ask Me Why” for the BBC radio show, “Pop Go The Beatles” airing on the 24th September, 1963. Therefore, that version appears on the 2013 album release “On Air – Live At The BBC Volume 2”. On this album it sits as track 16 after “Chains” and before “Till There Was You“.

Incidentally, after they recorded this track they also recorded “Tip of My Tongue”, a Paul McCartney composition. However, George Martin wasn’t happy at the end result. So they gave that song to Tommy Quickly but his resulting single didn’t reach the charts.

The “Please Please Me/Ask Me Why” single was a successful single peaking at number 2 in the UK. However, some charts did place it at number 1. Nonetheless, it gave the public a glimpse of things to come!

Tagged Ask Me Why, Smokey Robinson and the Miracles, What's So Good About Goodbye. Bookmark the permalink.