“Baby You’re A Rich Man” comes from The Beatles’ album, “Magical Mystery Tour“. However, in the UK it was also a single release (B-side to “All You Need Is Love”). This is because in the UK, the Magical Mystery Tour soundtrack was a double EP release and the song was not on those.

Written by the Lennon-McCartney songwriting partnership, “Baby You’re A Rich Man” originates from an unfinished song by John Lennon.

Its title was “One of the Beautiful People” and Paul McCartney chips in with his chorus. 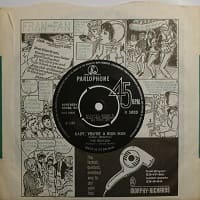 “That’s a combination of two separate pieces, Paul’s and mine, put together and forced into one song. One half was all mine. [Sings] ‘How does it feel to be one of the beautiful people, now that you know who you are, da da da da.’ Then Paul comes in with [sings] ‘Baby, you’re a rich man,’ which was a lick he had around.”

Inspiration behind the song possibly came from the time when Lennon attended the 14 Hour Technicolor Dream on 29 April 1967. This was an all-night festival in the Great Hall of the Alexandra Palace, London. The idea for the multi-artist event was a to raise funds for the counterculture paper, “International Times”. Earlier, a police raid on the paper’s offices forced its closure, hence the event.

The “beautiful people” refers to the 1960s hippie movement while the chorus is a statement on the idolisation of non-material wealth. But many thought that the band was having a sly dig at manager Brian Epstein. The claim is that John Lennon once sang “Baby you’re a rich fag Jew”. Indeed, during the same recording sessions, Lennon also made derogatory remarks about Paul McCartney, Ringo Starr and Mick Jagger too. It is not clear whether he was high on drugs at the time.

In June 1967, the hippie culture saw 100,000 people attend the “Summer of Love” in Haight-Ashbury, California. Most of the young people attending also wore hippie type clothes. Indeed, this event marked the full emergence of the 1960s counterculture. The Beatles stopped touring in 1966 but their album, together with this song helped to provide a suitable backdrop for the new phenomenon.

Perhaps the idea came from the Alexandra Palace event where 10,000 people attended earlier. Be that as it may, a new fashion came about, including “Flower Power”. Drug culture, together with psychedelia became more popular during this period too.

The Beatles began recording “Baby You’re A Rich Man” on 11 May 1967, in Studio One of the Olympic Sound Studios, London, during the 9.00pm-3.00am session. Recorded and mixed completely independent of the Abbey Road Studios, the first time ever for a Beatles’ recording, there were 12 takes that day with the last being suitable as the master rhythm track.

The song features a clavioline, a three-octave monophonic keyboard instrument that was a forerunner to the synthesizer. Lennon used its oboe setting, creating a sound similar to an Indian shehnai. Mick Jagger also attended the session and he sings in the chorus towards the end of the track.

Together with the A-side “All You Need Is Love”, the resulting single reached number one in the UK charts. It also got to number one in the US, Canada and Australia as well as many European countries. Of course, the A-side was the British offering to the first international television show, “Our World“. So, perhaps that boosted sales, as if The Beatles ever needed a boost!

When released in the UK, the 1967 “Magical Mystery Tour” soundtrack was a double EP without “Baby You’re A Rich Man” on them. However, in 1987 when CD’s became more popular, the American version of the album became standard. On that album, the track sits proudly after track 3, “Penny Lane” and before “All You Need Is Love”.

Although the song appears briefly in the 1968 “Yellow Submarine” film, it was missing from the soundtrack album. However, it is included on their 1999 “Yellow Submarine Songtrack” album. On this album the song comes after track 9, “With A Little Help From My Friends” and before “Only A Northern Song“.