“Bad Boy” is a song which The Beatles covered and is on their 1966 album “A Collection of Beatles Oldies”. However, the song appears on their 1988 album, “Past Masters” too.

A Collection of Beatles Oldies
Past Masters 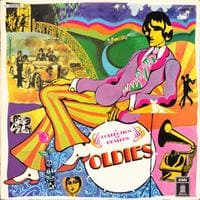 A Collection of Beatles Oldies (1966)

Written and recorded by Larry Williams, “Bad Boy” became a single release together with the flip side “She Said Yeah”. Although the song never got in the top 40.

The Beatles covered “Bad Boy” but not the flip side. However, The Rolling Stones and The Animals did. But it’s clear that Paul McCartney wanted to.

“Me and John [Lennon] particularly loved Larry Williams…Bony Moronie…John did ‘Slow Down’…I was always going to do ‘She Said Yeah'”.

“Bad Boy”, together with “Slow Down” and “Dizzy Miss Lizzy“, are are all Larry Williams’ songs which the Fab Four recorded. The Beatles would often sing cover songs as part of their live act in the early 1960s and this song was no exception. The Beatles’ rock and roll version is also more upbeat than the offering from Larry Williams.

The Beatles began recording “Bad Boy” on the 10th May 1965 in Studio Two of the EMI Studios, London, during the 8.00pm-11.30pm session. The band recorded 4 takes that day with take 4 becoming the master rhythm track suitable for overdubbing. On the same day, they also recorded 7 takes of “Dizzy Miss Lizzy”.

The original idea was to release “Bad Boy” and “Dizzy Miss Lizzy” to the North American market only but that didn’t quite work out. This is because, in the UK, to help plug the gap over the Christmas period in 1966, it became a part of the compilation album, “A Collection of Beatles Oldies”. This was 19 months after recording the song. Of course, “Dizzy Miss Lizzy” became part of the 1965 album, “Help!“.

One Response to Bad Boy