“Can’t Buy Me Love” is a track from The Beatles’ album, “A Hard Day’s Night”, of course. Indeed, the song was also a single which made number one across the world. Moreover, the B-side is equally good, “You Can’t Do That”.

Written by Paul McCartney but credited to the Lennon-McCartney partnership, “Can’t Buy Me Love” is a classic Beatles’ song. They released it as a single in March, 1964, then as an album track in July that year.

“That’s Paul’s completely. Maybe I had something to do with the chorus, but I don’t know. I always considered it his song.”

McCartney wrote the song in the George V Hotel, Paris. At the time, The Beatles were appearing at the city’s Olympia Theatre during a 19 day residency. However, Beatlemania had kicked into gear by now and the band needed to produce more material, especially since they were due to make their first film soon. So, they moved an upright piano into one of their suites in order to continue their songwriting. 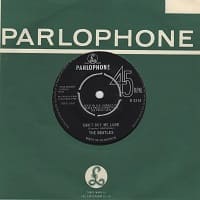 Although this was an early Beatles’ composition, the song’s verse has a twelve bar blues structure, something they wouldn’t normally do with their own material. Also, this is the first Beatles’ single to feature only one singer, Paul McCartney.

“Can’t Buy Me Love is my attempt to write a bluesy mode. The idea behind it was that all these material possessions are all very well but they won’t buy me what I really want. It was a very hooky song.”

In 1966, when asked by an American journalist about the “true” meaning of the song, McCartney replied:

“I think you can put any interpretation you want on anything, but when someone suggests that ‘Can’t Buy Me Love’ is about a prostitute, I draw the line….”

“The idea behind it was that all these material possessions are all very well, but they won’t buy me what I really want.”

Although the B-side didn’t make it in to the 1964 film, “A Hard Day’s Night”, the A-side did. In short, this was the sports field scene where the band members clown around together. This was just after they cheekily took the fire exit to escape from their manager “Norm” (Norman Rossington) while exclaiming, “We’re Out!”.

However, such was the popularity of the song, it appears twice in the film. The second occurrence is where John, Paul and George try and “rescue” Ringo from the police station. They run to and from the station with police pursuing them in a manner similar to a Keystone Cops chase.

The Beatles began recording “Can’t Buy Me Love” on the 29th January, 1964, at EMI’s Pathé Marconi Studios, Paris during a late-morning/afternoon session. They recorded 4 takes and the second one appears on the 1995 album, “Anthology 1”. On this day, they also recorded, “Komm, Gib Mir Deine Hand” (takes 1–11) “Sie Liebt Dich” (takes 1–14).

Once the “Can’t Buy Me Love” takes came back to the Abbey Road Studios, they removed the background vocal harmonies. On the 25th February, McCartney re-recorded and overdubbed his lead vocal part. Therefore, the single became their first one to have only one singer with none of their trademark harmonies.

The final mix, including a hi-hat overdub from engineer Norman Smith, took place on 10th March. This happened while The Beatles were busy filming “A Hard Day’s Night”. It was necessary because when they played the original tape back, there was a ripple in it resulting in the intermittent loss of treble on Ringo’s hi-hat cymbal.

In the early 1960s, The Beatles would record regularly for BBC Radio shows and take advantage of the free publicity while appealing to their fans. The version on their 1994 album, “Live At The BBC” is from the show, “From Us To You” airing on the 30th March, 1964 (recorded on the 28th February). They also recorded it later for another episode of that show and again for the “Saturday Club” airing on the 4th April.

The single became their fourth number one in the UK. It also went to the top of the charts in many other countries such as Australia and New Zealand.

However, it was their dominance in the American charts which became a sensation. Not only did this single reach number one, but their records held the top five places on the 4th April. The other songs were, “Twist And Shout“, “She Loves You“, “I Want To Hold Your Hand” and “Please Please Me“. No other band or artist has since matched that. During its second week at the top, the band had fourteen songs in the Billboard Hot 100 simultaneously.

Also in 1964, Ella Fitzgerald reached number 34 in the UK charts with McCartney’s song. Her jazz version was from her album, “Hello, Dolly”.