“Come Together” is a Beatles’ single from 1969. Indeed, it is a double A-side with the flip side being, “Something”. But it is also on the Abbey Road album as well as many others.

Written mostly by John Lennon but credited to the Lennon-McCartney partnership, “Come Together” is a bluesy rock song from 1969.

The song came about because of an election campaign by Timothy Leary running for governor the US state of California. Ronald Reagan was the governor of the state at the time but Leary wanted to challenge him. Having met Lennon and Ono at the Queen Elizabeth Hotel in Montreal for their second “bed-in for peace” protest, Leary made the best possible connection.

The slogan used by Leary for his campaign was “Come together, join the party”. Of course, this is just the type of line that people as creative as John Lennon strive on. However, it didn’t quite work as it might have.

“It’s gobbledygook; Come Together was an expression that Leary had come up with for his attempt at being president or whatever he wanted to be, and he asked me to write a campaign song. 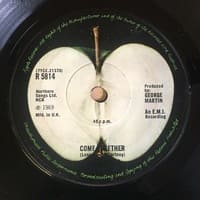 I tried and tried, but I couldn’t come up with one. But I came up with this, Come Together, which would’ve been no good to him – you couldn’t have a campaign song like that, right?”

Although the song was work-in-progress and could easily benefit from adjustment, Leary wasn’t too jubilant at Lennon’s initial offering. However, that didn’t matter because Leary went to jail for possessing drugs. In effect, the election campaign was over. Be that as it may, this was the last time that Lennon would compose a song for The Beatles around political issues.

The Beatles covered more Chuck Berry songs than from any other artist, but that was in the early 1960s. However, influence for “Come Together” clearly came from the Chuck Berry stable even though this was 1969. Also, the original intention was for a much faster version of the song.

“He originally brought it over as a very perky little song, and I pointed out to him that it was very similar to Chuck Berry’s You Can’t Catch Me. John acknowledged it was rather close to it so I said, ‘Well, anything you can do to get away from that.’ I suggested that we tried it swampy – ‘swampy’ was the word I used – so we did, we took it right down. I laid that bass line down which very much makes the mood. It’s actually a bass line that people now use very often in rap records. If it’s not a sample, they use that riff. But that was my contribution to that.”

Of course, this track was to evolve over time, especially in the studio.

“Come Together changed at a session. We said, ‘Let’s slow it down. Let’s do this to it, let’s do that to it,’ and it ends up however it comes out. I just said, ‘Look, I’ve got no arrangement for you, but you know how I want it.’ I think that’s partly because we’ve played together a long time. So I said, ‘Give me something funky,’ and set up a beat, maybe, and they all just join in.”

The Beatles began recording “Come Together” on the 21st July, 1969, in Studio Three of the EMI Studios, London, during the 2.30pm-9.30pm session. The band recorded 8 takes with take 6 being suitable for the master rhythm track. This became take 9 to which they added the overdubs and tweaks over the next few days. The song was complete on the 30th July and ready for release as both a single and an album track.

On the 1969 album, “Abbey Road”, it is the opening song just before “Something”, the flip side of the single. Meanwhile, on their 1996 album, “Anthology 3”, we get take 1 with slightly different lyrics. Take 5 is also available on the 2019 “50th Anniversary Reissue of Abbey Road”.

The single become a number one hit in the US but only peaked at number 4 in the UK. It was also number one in Australia (5 weeks), New Zealand and Canada (5 weeks). The performance in the UK may have been down to this track receiving a ban by the BBC for product placement (Coca-Cola) but also there was such a demand for the album. Indeed, this was the first time that songs from a Beatles’ album were on a single too.