Cry For A Shadow

“Cry For A Shadow” is a Beatles’ instrumental track which is on their 1995 album, “Anthology 1”. But, when they recorded this number, their name was The Beat Brothers. This is because, at the time, they were the backing group for Tony Sheridan in Hamburg, Germany. This track was the A-side of a UK single in 1964 but they recorded it in 1961. Obviously, this was before Ringo Starr joined the band. Although this track appears on the “Anthology 1” album, its B-side, “Why” doesn’t.

** Because this track is from 1961, Ringo Starr had not yet joined The Beatles. 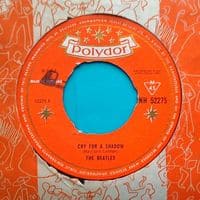 Cry For A Shadow

Originally called “Beatle Bop”, “Cry For A Shadow” is one of those early Fab Four recordings which is a must for all Beatlemaniacs, or indeed any historical mucic collector. Another reason why collectors should have this track is because it is the first Beatles composition on a record pressing. It is also the only Beatles track to have the credit going to Harrison-Lennon.

“In Hamburg we had to play so long, we actually used to play Apache… But John and I were just bullshitting one day, and he had this new little Rickenbacker with with a funny kind of wobble bar on it. And he started playing that off, and I just came in, and we made it up right on the spot.”

Although it was the A-side of the British single, in North America it was the B-side. This is because, across the pond, they preferred the instrumental track to be the B-side. Interest in this single only came about once The Beatles became a household name. Hence the difference between the recording date and release date.

This instrumental rock piece is in a style similar to that of British group, The Shadows. Obviously George Harrison and John Lennon clearly admired the then biggest British instrumental rock & roll group and the influence shines out. Indeed, the guitar licks are typical of Hank Marvin (founding member of The Shadows) at the time. There is also a resemblance to the famous Jet Harris yell in the middle eight.

With the track being an instrumental, there are no lyrics, but there are faint cries from the band members. These screams and yelps basically are wordless vocals, similar to what we see in their other instrumental from 1967, “Flying“.

The Beatles recorded “Cry For A Shadow” on the 22nd June 1961, in the Friedrich-Ebert-Halle, Hamburg, Germany. At that time they also had the name of The Beat Brothers and were the backing band for Tony Sheridan. During this recording session, they also recorded, “Ain’t She Sweet“.

The the time, The Beatles were hungry for success and they knew they had talent, but there were many hurdles to jump first. In fact, it was only when manager Brian Epstein came along that The Beatles got a mention.

“Although we did Ain’t She Sweet and the instrumental Cry For A Shadow without Sheridan, they didn’t even put our name on the record.”

“Cry For A Shadow” follows track 11, “Ain’t She Sweet” on the 1995 “Anthology 1” album where credit goes to “The Beat Brothers”. Also on that album is what many believe is the first Beatles’ single, “My Bonnie“. This single, credited to Tony Sheridan and the Beat Brothers has the B-side, “The Saints“. It was a single release in Germany during October 1961.