“Day Tripper” is a Beatles’ single from 1965 which is also on their “Past Masters” album. However, the single became a massive chart hit around the world. In short, it is a double A-side with the flip side of this song being “We Can Work It Out”. Obviously with it being a number one single, both songs are on their 1 (One) album as well.

Written mostly by John Lennon, but credited to the Lennon-McCartney partnership, “Day Tripper”, came about because the band was in need of a single to compliment their “Rubber Soul” album release.

This Beatles’ single became the first record in the world to feature double A-sides, so, yet another “first” for the Fab Four! 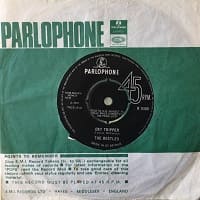 “Based on an old folk song I wrote about a month previous. It was very hard going, that, and it sounds it. It wasn’t a serious message song, it was a drug song. In a way, it was a day tripper – I just liked the word.”

“That was a co-written effort; we were both there making it all up but I would give John the main credit. Probably the idea came from John because he sang the lead, but it was a close thing. We both put a lot of work in on it.”

Obviously the band needed to be clever with their references to drugs. This was specifically more so with their single releases otherwise radio stations might not play them.

The Beatles began recording “Day Tripper” on the 16th October, 1965, in Studio Two of the EMI Studios, London, during the 2.30pm-7.00pm session. The band then recorded three takes with the third one being suitable for overdubbing. They also recorded “If I Needed Someone” on that day too.

The single became a number one hit in the UK and a few European countries but only reached number five in the US Billboard Hot 100 chart. They released both “Rubber Soul” and “Day Tripper” on the same day. In the UK, the single managed to stay top for five weeks.

Originally, the stereo mixes had some noticeable errors, for example the tambourine dropouts around the 1:50 mark. However, they corrected these errors for the 2000 compilation album, “1”.

In the 2006 album, “Love“, there is a small section featuring the guitar riff from this track.