Don’t Let Me Down

“Don’t Let Me Down” is the B-side of a 1969 single by The Beatles which is also on the “Past Masters” album. The A-side to the single is “Get Back”, of course.

7-inch single
Past Masters
“Let It Be… Naked” Album

Don’t Let Me Down

Written by John Lennon and credited to the Lennon-McCartney partnership, “Don’t Let Me Down” also features Billy Preston on the electric piano. This was a love song with Yoko Ono in mind and Paul McCartney gave his interpretation of the song, “I’m really stepping out of line on this one. I’m really just letting my vulnerability be seen, so you must not let me down.” 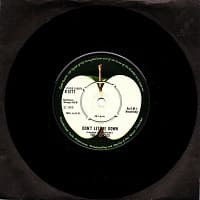 Get Back/Let It Be

With the often stormy “White Album” days behind them, the fierce “Get Back/Let It Be” sessions were getting into full swing. Although The Beatles were still playing together as a band, they were basically just fulfilling their contracts.

Behind the scenes, Paul McCartney was trying his best to keep the band together but there were forces pulling them apart. For example, John Lennon’s obsession with Yoko Ono was one factor. In fact, many people put the break up of The Beatles firmly down to Ono.

The idea for the “Get Back” project was to get the band back to basics while filming them rehearsing, cumulating in their first live public performance since 1966. As a result, this would take the form of a documentary film. Their rooftop concert on the 30th January, 1969, included many songs and they performed “Don’t Let Me Down” twice. Obviously the “Get Back” project became “Let It Be” complete with a single release as well as an album and a film.

After a few rehearsals at the Twickenham Film Studios in London, they began recording “Don’t Let Me Down” on the 28th January, 1969, with Billy Preston. The single actually gives him credit, “The Beatles with Billy Preston”. Indeed, this was the only Beatles’ single that gives credit to another artist this way.

Although this song didn’t appear on the “Let It Be” album, it made an appearance on the 2003 album, “Let It Be… Naked”. This was because the producer on the former album was Phil Spector together with his “Wall Of Sound” arrangements. Paul McCartney and George Martin were not happy at the results of that.

The mixes on the “Let It Be… Naked” are a little closer to what McCartney would have liked under Martin. However, the version on this album is a composite edit of the two rooftop versions. On the album, the track sits after track 7, “One After 909” and before, “I Me Mine“.