“Eleanor Rigby” is a Beatles’ song which is also on their 1966 album, “Revolver”. It was also a double A-side single with the flip side being “Yellow Submarine”.

** Ringo Starr had no part to play on this track because the track is a string ensemble.

Written primarily by Paul McCartney, but with credit going to the Lennon-McCartney partnership, “Eleanor Rigby” has become a timeless classic.

They released the double A-sided single on the 5th August, 1966, just weeks before they became a studio-based band instead of a touring band. On the 29th August, 1966, at Candlestick Park, San Francisco, The Beatles would play their last ever paid concert.

Beatlemania was at its height but their music was evolving, especially through studio experimentation and much of their newer music would be difficult to perform live, just like this song.

So, retiring to the Abbey Road Studios was almost inevitable. This was in order to allow for even greater creativity and they had that in abundance!

The Beatles’ live act of rock and pop onstage was drawing to a close and “Eleanor Rigby” was their last single before the complete transformation.

Moreover, with this song concentrating on the fate of lonely, elderly people, the band was reaching out to a much wider audience. Together with their progressive experimental music, it represents a quantum leap in the advancement of the best band on Earth.

The Fab Four’s traditional audiences were about to be no more, but we were arguably about to see the band produce some of their best work. 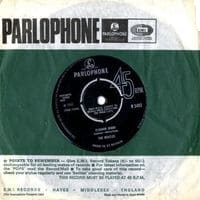 Who Was Eleanor Rigby?

So, just who is Eleanor Rigby? Well, according to Paul McCartney, Eleanor Rigby is purely a fictitious character and the song is not about anyone in general.

“I thought, I swear, that I made up the name Eleanor Rigby like that. I remember quite distinctly having the name Eleanor, looking around for a believable surname and then wandering around the docklands in Bristol and seeing the shop there. But it seems that up in Woolton Cemetery, where I used to hang out a lot with John, there’s a gravestone to an Eleanor Rigby. Apparently, a few yards to the right there’s someone called McKenzie.”

Indeed, it wasn’t until the 1980s that someone discovered those tombstones in the Liverpool cemetery. This is quite amazing really, and perhaps the coincidence could be a product of McCartney’s subconsciousness. Just maybe when the youngsters hung around the graveyard they actually did see those headstones, we may never know.

What we do know is that Paul McCartney met John Lennon in the adjoining church in 1957 while at a fete. A meeting that would give us The Quarrymen which would soon become The Beatles.

McCartney got the idea for the tune in Jane Asher’s home in London but as with his other classic “Yesterday“, that’s all it was to begin with, a tune with no actual lyrics. He would tinker on the piano keys and improvise with the odd word and then improvise with sounds. However, he soon had the idea for a church wedding which signifies happiness. Then, as if to draw on sadness, he introduced loneliness to the song.

“While I was fiddling on a chord some words came out: ‘Dazzie-de-da-zu picks up the rice in the church where a wedding has been…..’ This idea of someone picking up rice after a wedding took it in that poignant direction, into a ‘lonely people’ direction.”

One of the names McCartney used as the character in the song was “Miss Daisy Hawkins”. But, he soon came up with Eleanor after Eleanor Bron, who played the leading lady (Ahme) in the 1965 film, “Help!“. He settled for the surname of “Rigby” after a store in Bristol, “Rigby & Evens Ltd, Wine & Spirit Shippers”. He observed the store while visiting his girlfriend, Jane Asher, who was acting in “The Happiest Days of Your Life” at the Bristol Old Vic Theatre.

The title could easily have become, “Father McCartney” but Paul says that he thought people would think it was about his Dad sitting knitting his socks. “Dad’s a happy lad. So I went through the telephone book and I got the name ‘McKenzie'”.

Further Contributions By Others

All the band members allegedly contribute in some way to the song, including Ringo Starr and George Harrison. As the song developed, Starr contributed the line “writing the words of a sermon that no one will hear”. Then he suggested making “Father McCartney” darn his socks. Meanwhile, Harrison brought us the hook of the song as in, “Ah, look at all the lonely people”.

However, after The Beatles disbanded in 1970, there were many conflicting stories between Lennon and McCartney over the share entitlement to various songs. Generally speaking, John Lennon would often stake more of a claim to a song if it was a classic. Of course, “Eleanor Rigby” is an absolute classic.

In 1971, Lennon once said that he “wrote a good half of the lyrics or more”. While McCartney says, “John helped me on a few words but I’d put it down 80-20 to me, something like that”.

For “Eleanor Rigby”, the band didn’t strap on guitars and strum away in the studio. In fact, none of the band members played a note!

George Martin conducted an octet comprising of string musicians on the 28th, April, 1966, in Studio Two of the EMI Studios, London, during the 5.00pm-7.50pm session. They recorded 14 takes with the last being suitable for the master rhythm track. Paul McCartney duly overdubbed his vocals on the same day.

The next day, McCartney added more of his vocals together with the harmonies from John Lennon and George Harrison. Then, after further vocal tweaks from Paul McCartney on the 6th June, the song was complete.

George Martin said that his influence for the string octet was from the Bernard Herrmann’s score on the 1960 film, “Psycho”. Of course, that Alfred Hitchcock movie had some distinct incidental music, to say the least!

Although “Eleanor Rigby” features strongly in the 1968 animated film, “Yellow Submarine“, it didn’t appear on the original soundtrack album. But, they did add it to the 1999 songtrack album. There it sits after track 2, “Hey Bulldog” and before, “Love You To“.

Meanwhile, it appears on the 2006 album, “Love”. This comes together with the “Julia” transition and elements from “A Day in the Life” and “Strawberry Fields Forever“. But it also has sound effects from “Revolution 9“.

With the flip side of “Eleanor Rigby” being “Yellow Submarine”, this double A-sided single would appeal to people of all ages. It’s not surprising then that the single was a complete success. Indeed, the single reached the top of the charts in the UK, New Zealand and Canada. However, it only peaked at number 11 in the American charts.

The reason why the single didn’t make it to number one in the US could be for a number of reasons. For instance, it could well be that the song was rather downbeat. On the other hand, “Yellow Submarine”, which charted separately, peaked at number two.

Another attributing factor could be their interview in March, 1966, some five months before the song’s release. Of course we refer to the famous, “We’re more popular than Jesus now” quote. This sparked a nasty backlash in the Bible belt of America which also caused some American radio stations to stop playing their music.

Be that as it may, the band went from strength to strength despite this small hiccup. Obviously the song qualified for their 2000 album, “1”.