Free As A Bird

“Free As A Bird” is a single by The Beatles from 1995 which also appears on their “Anthology 1” album. 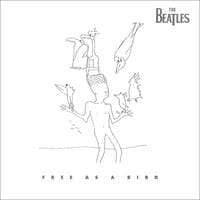 Free As A Bird

In 1977, John Lennon composed and recorded “Free As A Bird” as a home demo in the Dakota building, New York City. It was on a simple cassette tape along with a number of other songs, but the quality of the tape was poor. However, in 1995, the remaining Beatles somehow managed to clean it up and make a smash hit record from it. This was 25 years after the group disbanded and 15 years after the death of John Lennon.

In the early 1990s, the idea of a Beatles Anthology project was becoming more clearer. The remaining Beatles wouldn’t be getting back together as a band but they would work together on the project. This would result in a television documentary as well as three double albums and a book highlighting the history of The Beatles.

Paul McCartney, George Harrison and Ringo Starr all agreed to add some incidental background music for the project. However, they did want to create some new music. The only problem was that they also agreed not to release anything as The Beatles unless all original band members were present.

On many occasions, Yoko Ono got the blame for splitting up The Beatles but she had a unique opportunity to bring the band back together. Ono had the home demos with Lennon on piano and would give the recordings to Paul McCartney. This happened when she met McCartney in New York on the 19th January, 1994. This was a night when McCartney inducted Lennon into the Rock ‘n’ Roll Hall of Fame and Ono accepted the award on Lennon’s behalf.

Lennon’s home demos consisted of 4 songs, “Free As A Bird”, “Real Love“, “Grow Old With Me” and “Now And Then”. However, Yoko Ono was aware of the interest in John Lennon’s material before this meeting. This was possibly through previous enquiries from George Harrison and Neil Aspinall.

“It was all settled before then, I just used that occasion to hand over the tapes personally to Paul. I did not break up The Beatles, but I was there at the time, you know? Now I’m in a position where I could bring them back together and I would not want to hinder that. It was kind of a situation given to me by fate.”

Obviously, the tape recordings would need much work in order to make them commercially viable. Once cleaned up, “Free As A Bird” would become the first new Beatles’ song in 25 years. Not only that but it would take the charts by storm to prove that The Beatles still reigned supreme.

McCartney took Lennon’s unreleased recordings to his Sussex studio where the painstaking work would begin. George Martin, once the magnificent powerhouse in the studios declined to work on “Free As A Bird”. This is because his hearing wasn’t too grand. However, he did produce and direct the whole Anthology project overall:

“George wasn’t involved, no. George doesn’t want to produce much any more ’cause his hearing’s not as good as it used to be. He’s a very sensible guy, and he says, ‘Look, Paul I like to do a proper job’, and if he doesn’t feel he’s up to it he won’t do it. It’s very noble of him, actually – most people would take the money and run.”

In George Martin’s absence, George Harrison specifically wanted Jeff Lynne to produce the new song. In fact, he insisted on that arrangement. However, Lynne had a lot of technical difficulties to cope with. Obviously he couldn’t separate the vocals and piano on the mono cassette.

“It was very difficult, and one of the hardest jobs I’ve ever had to do, because of the nature of the source material; it was very primitive sounding, to say the least. I spent about a week at my own studio cleaning up both tracks on my computer, with a friend of mine, Marc Mann, who is a great engineer, musician and computer expert.”

Starr said that the three remaining Beatles agreed they would pretend that Lennon had “gone for lunch”, or had gone for a “cup of tea” during their contributions to the song. Jeff Lynne said “Putting fresh music to it was the easy part!”.

The Beatles disbanded 25 years previously but that meant nothing because the song was a good one and this was the best band in the world ever. So, the “Free As A Bird” single was a success and made number 2 in the UK charts. The single also made the top ten in many countries such as America, Canada and Australia.

Although released in 1995, they took another look at the recording in 2015. They then cleaned it up further, making John Lennon’s voice more prominent. The original release initially had John Lennon saying the old George Formby phrase “Turned Out Nice Again” backwards at the end. However, the 2015 remix has this playing forwards.

The song obviously is the opening track on the 1995 album, “Anthology 1”.

The music video for “Free As A Bird” is a masterpiece in itself and it won the 1997 Grammy award for Best Short Form Music Video. The director and producer was Joe Pytka and Vincent Joliet respectfully.

You need to imagine the screen shots are coming from a movie camera attached to an unidentified bird as it flies around. Obviously the scenes show references to many Beatles’ songs. The estimation is that there are references to between 80 and 100 Beatles’ songs. For example, one of the most obvious ones is when a helter skelter slide appears.

Incidentally, George Harrison played the ukulele on the track and wanted to be the ukulele player in the video. Pytka felt it would be wrong to have any of the remaining band members in the video. However, later he regretted this decision after he realised that the ukulele piece was not from an old recording.

The Cavern Club and Beatles Forum now invite you to tell us how many Beatles’ songs you can see references to in the video. We won’t spoil your fun by showing any of them here, but if you really need to see the ones we know of, click here.