From Me To You

“From Me To You” is a single by The Beatles from 1963 and is also on many of their albums.

From Me To You

This is a Lennon-McCartney song and is The Beatles’ third single, and in fact, their first UK number 1. However, it depends on which charts you use. This is because in some charts at the time, their second single, “Please Please Me” did manage to top them. But most use the chart system that became the official UK singles chart where “Please Please Me” only managed to reach number 2.

In America, the Beatles’ single got nowhere, obviously nobody knew who the Fab Four were across the pond. However, the song did chart as a cover version. This came from the talented Del Shannon who reached number 77 in the Billboard Hot 100 chart. His single had the B-side “Two Silhouettes”. Shannon’s release is the first time that a Lennon-McCartney composition got into the American pop charts.

Once the Fab Four became famous, they re-released their song again on the 3rd January, 1964. However, this was the B-side to “Please Please Me” but it still charted. Thus, it became the first time The Beatles entered the American charts, albeit in the “Bubbling Under” portion of the Billboard Hot 100.

But, the British invasion arrived. Beatlemania would soon strike hard, of course.

Written On A Tour Bus

While on tour with Helen Shapiro, they were onboard the tour bus on the 8th February, 1963, heading to Shrewsbury, this is when they had the idea for the song.

“The night Paul and I wrote From Me To You, we were on the Helen Shapiro tour, on the coach, travelling from York to Shrewsbury.

We weren’t taking ourselves seriously – just fooling around on the guitar – when we began to get a good melody line, and we really started to work at it. 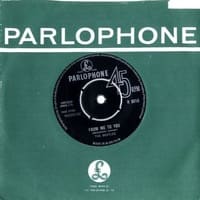 Before that journey was over, we’d completed the lyric, everything. I think the first line was mine and we took it from there.

What puzzled us was why we’d thought of a name like From Me To You. It had me thinking when I picked up the NME to see how we were doing in the charts. Then I realised – we’d got the inspiration from reading a copy on the coach. Paul and I had been talking about one of the letters in the From You To Us column.”

There’s a secret to writing successful songs and The Beatles had their own way of doing things:

“There was a little trick we developed early on and got bored with later, which was to put I, Me or You in it, so it was very direct and personal: Love Me Do; Please Please Me; From Me To You – we got two of them in there…

That was a pivotal song. Our songwriting lifted a little with that song. It was very much co-written. We were starting to meet other musicians then and we’d start to see other people writing. After that, on another tour bus with Roy Orbison, we saw Roy sitting in the back of the bus, writing Pretty Woman. It was lovely. We could trade off with each other. This was our real start.”

Another one of their “tricks of the trade” was to incorporate their famous falsetto, “Whoooo” during the songs. They would also use this later on another single, “She Loves You“. They previously done this with their “Twist And Shout” song on the “Please Please Me” album, of course. But this was the first time they would use it on a single.

Just to point out that the single release in the UK has a different opening harmonica piece than the releasees in other countries.

The Beatles began recording “From Me To You” on the 5th March, 1963, in Studio Two at the EMI Studios, London, during the 2.30pm-5pm session. They also recorded its B-side, “Thank You Girl” as well as a version of “One After 909” on the same day. They recorded 7 takes that day with the last being suitable for the master rhythm track suitable for overdubbing etc.

On their 1995 album, “Anthology 1”, is a recording from the 24th October, 1963, at the The Karlaplansstudion, Sweden. This was for “live for The Beatles, Pop Group from Liverpool Visiting Stockholm”.

In The Beatles’ formative years they would record songs for many BBC Radio programmes. However, they recorded four editions of a show which was usually on during public holidays. That show was “From Us To You” and they adapted this song to suit. You can hear that introductory song recorded on the 28th February 1964, on their 1994 album, “Live At The BBC”.

The “On Air – Live At The BBC Volume 2” version comes from a recording made for the BBC’s “Easy Beat” show airing on the 20th October 1963.

You can also hear the tune as an instrumental arrangement in the 1965 film, “Help!“. The “From Me to You Fantasy” appears just after the 31 minute mark as the cult try and take Ringo’s ring off his finger while he is sleeping.

At last, The Beatles hit the number one spot in the official UK charts on their third attempt. It also reached number one in New Zealand as well as reaching number 9 in Australia. It made the American charts on its second release but that didn’t matter, Beatlemania was coming. Indeed, it was unstoppable!

Tagged First Beatles' song in the American charts, From Me To You, NME, Tricks of the trade, Two Silhouettes, Whoooo. Bookmark the permalink.