“Get Back” is a single by The Beatles which is also on their 1970 album, “Let It Be”. However, variations of the song are also on many others albums.

Written by Paul McCartney, although credited to the Lennon-McCartney songwriting partnership, this song became a single with credit to, “The Beatles with Billy Preston”. Indeed, this was the only Beatles’ single that credits another artist.

The song’s evolution started out of an unstructured jamming session on the 7th January, 1969. Then soon after the jam started, McCartney added some lyrics. By reworking “Get back to the place you should be” from their “Sour Milk Sea” to “Get back to where you once belonged”, the song began to evolve.

Indeed, this was Paul McCartney’s press release to publicise the new song:

“We were sitting in the studio and we made it up out of thin air… we started to write words there and then… when we finished it, we recorded it at Apple Studios and made it into a song to roller-coast by.”

By the 9th January, McCartney introduced a rough version of the “Sweet Loretta” verse to the band.

Many people think that The Beatles were being racist with one of the jamming sessions when the band began singing about Pakistanis and Puerto Ricans. There are bootleg versions available which include the lines, “… don’t need no Puerto Ricans living in the USA”; and “don’t dig no Pakistanis taking all the people’s jobs”. We shall let Paul McCartney explain:

“When we were doing Let It Be, there were a couple of verses to Get Back which were actually not racist at all – they were anti-racist.

There were a lot of stories in the newspapers then about Pakistanis crowding out flats – you know, living 16 to a room or whatever.

So in one of the verses of Get Back, which we were making up on the set of Let It Be, one of the outtakes has something about ‘too many Pakistanis living in a council flat’ – that’s the line 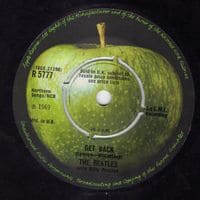 Which to me was actually talking out against overcrowding for Pakistanis… If there was any group that was not racist, it was the Beatles. I mean, all our favourite people were always black. We were kind of the first people to open international eyes, in a way, to Motown.”

Who Is Sweet Loretta Martin And JoJo?

Many theories exist, about Loretta Martin And JoJo but that’s all they are – theories! Again, we let Paul McCartney explain, after all, he wrote the words to it:

“Many people have since claimed to be the Jo Jo and they’re not, let me put that straight! I had no particular person in mind, again it was a fictional character, half man, half woman, all very ambiguous. I often left things ambiguous, I like doing that in my songs.”

So, these people are basically fictional characters. However, don’t let that stop you from commenting below or even making a post in the massive Beatles Forum. Obviously we encourage free speech but try and stick to the facts please!

All the rehearsals were at the Twickenham Film Studios in London, however, the official recordings come from the Apple studios in  Savile Row. They began recording the song on the 21st, January, 1969, with Billy Preston joining them the next day. His mediary role would be to try and relieve the internal strife within the band and to help musically. Indeed, he plays the Fender Rhodes electric piano on the track.

“He [Preston] came in while we were down in the basement, running through Get Back, and I went up to reception and said, ‘Come in and play on this because they’re all acting strange’. He was all excited. I knew the others loved Billy anyway, and it was like a breath of fresh air.

It’s interesting to see how nicely people behave when you bring a guest in, because they don’t really want everybody to know that they’re so bitchy… He got on the electric piano, and straight away there was 100% improvement in the vibe in the room. Having this fifth person was just enough to cut the ice that we’d created among ourselves.”

It wasn’t until the 27th, January when master track finally came about, this was take 11 from around 14 that day. Now they had something to work with.

Although the album and the single versions vary sightly, they are both from the same take. But, there are differences.

The single version has a clean start and fades out, but before it does, we hear the lines, “Get back Loretta / Your mommy’s waiting for you / Wearing her high-heel shoes / And her low-neck sweater / Get back home, Loretta.”

The album version doesn’t have these lines, instead, we hear Paul McCartney say, “Thanks Mo” in reply to Maureen Starkey’s cheering. Then we hear John Lennon say, “I’d like to say thank you on behalf of the group and ourselves, and I hope we’ve passed the audition”. These comments come from the rooftop concert on the 30th January, 1969. Also, at the beginning of the album version we hear John Lennon say, “Sweet Loretta Fart she thought she was a cleaner, but she was a frying pan”.

On the 1996 album, “Anthology 3” we get a raw take from the rooftop concert, the last public performance by The Beatles.

The version on the 2003 album, “Let It Be… Naked”, is the master take but has no speech and fades immediately before the final “whoo”.

Meanwhile, on the 2006 album, “Love”, we get a mashup mix that includes the opening guitar chord from, “A Hard Day’s Night“, the drum and guitar solos from “The End“, percussion from “Sgt Pepper’s Lonely Hearts Club Band (Reprise) as well as the orchestral section from “A Day in the Life“.

The Get Back Project was to try and get The Beatles back to basics and unite them again. Obviously we saw the band under stress during the “White Album” sessions. The original intention was to release an album with the name “Get Back”. However, by the time this project became an album in 1970, the band broke up for good and that album became “Let It Be”.

By now, under John Lennon’s instruction, he called on the services of Phil Spector whose job it was to mix the album ready for release. This was without the permission of both Paul McCartney and George Martin. So it was Phil Spector who is responsible for the speech on the album version.

There was plenty of filming during the Get Back project and with a lot of editing, the documentary film, “Let It Be” came into existence for release during May, 1970.

Together with its B-side of “Don’t Let Me Down”, this single reached number one in the UK, America, Canada, Australia, New Zealand, the Netherlands, France, West Germany, Mexico, Norway, Switzerland, Austria, Ireland and Belgium. It stayed top for a while too. For example, in the UK it stayed top of the charts for 6 weeks.

On the album, the song is the last one on their last studio album release after “For You Blue“. However, since most songs were complete before the Abbey Road album. Thus, there is many an argument over which was the last Beatles’ album. But date-wise, “Let It Be” takes that title hands down.

Tagged Billy Preston, Get Back, Get back to where you once belonged, JoJo, Pakistanis, Puerto Ricans, Sweet Loretta Martin, The Beatles with Billy Preston, The last Beatles' album, Twickenham Film Studios. Bookmark the permalink.