This page is all about the song, “Help!” from The Beatles. In 1965 this was a successful single, of course. However, there is also an album by the same name here. Not only that, but their second film has the same title. Officially, there is an exclamation mark after the title, of course.

Written by John Lennon but with some assistance from Paul McCartney, the song credit goes to Lennon-McCartney.

“Most people think it’s just a fast rock ‘n’ roll song. I didn’t realise it at the time; I just wrote the song because I was commissioned to write it for the movie. But later, I knew I really was crying out for help.”

Out of all Lennon’s compositions for The Beatles’, this was one of his favourites together with “Strawberry Fields Forever”. This was because they were the most honest and genuine songs and not just “written to order”. Although he wrote the majority of the song, he called in Paul McCartney to assist with the “countermelody” arrangement.

Promotional Video For The Song “Help!”

In order to promote the single, they used the same sequence from the start of the film where they sang the song. However, this was minus the darts and credits, this clip comes from the 22nd April, 1965. 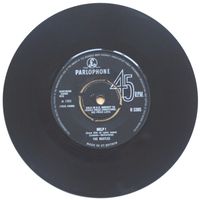 On the 23rd November they made another video for the BBC’s “Top of the Pops” end-of-year recap.

This video sees the Fab Four sitting on a workbench while they mine to the song. Ringo Starr sits at the back of the group with an umbrella waiting for the fake snow to fall near the end. It is a decent black and white film which shows the band members enjoying themselves and is available on DVD.

The Beatles began recording the song, “Help!”, on the 13th April, 1965, in Studio Two of the EMI Studios, London, during the 7.00pm-11.00pm session. They recorded a dozen takes although the first eight were the rhythm track only. Overdubbing was easy enough and the song was complete in just 4 hours!

They released the song, “Help!”, two weeks before releasing the album of the same name. The single went to number one in the UK, Australia, Canada, New Zealand and America as well as many European countries. It remained top of the charts for three weeks in both the UK and the US.

Of course, the song qualifies for the 2000 album, “1”. Meanwhile on their 1996 album, “Anthology 2” is a version from their appearance on the BBC television programme “Blackpool Night Out” airing on the 1st August, 1965. The song “Help!” also appears on their 2006 album, “Love” in full.

They released the Film “Help!” on July 29, 1965, in the United Kingdom but the Americans had to wait until August 25th to see the movie.