I Am The Walrus

“I Am The Walrus” is the B-side to the number one single, “Hello, Goodbye” from 1967. However, the song is also available on a few Beatles’ albums too.

I Am The Walrus

Written by John Lennon but credit goes to Lennon-McCartney, of course, “I Am the Walrus” was part of a hugely successful single and features prominently in the 1967 film, Magical Mystery Tour.

The significance to this is that in the UK, both the single and the EP’s were at the top of the charts together. Therefore, this song has the distinction of being a number 1 and number 2 at the same time. 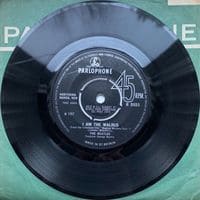 *** When releasing the Beatles’ recordings for the compact disc market in 1987, the American version of the soundtrack became the standard.

Since John Lennon’s favourite song at the time was Procol Harum’s 1967 single, “A Whiter Shade of Pale”, the likelihood is that this became some form of model to work on. However, he also had three song ideas as well which he couldn’t seem to finish. So, all he needed to do was piece them together to form one song.

The title of the song is a reference to Lewis Carroll’s poem “The Walrus and the Carpenter” from the book “Through the Looking-Glass”. But he expressed his concerns later after he linked himself with a villain.

“It never dawned on me that Lewis Carroll was commenting on the capitalist system. I never went into that bit about what he really meant, like people are doing with the Beatles’ work. Later, I went back and looked at it and realised that the walrus was the bad guy in the story and the carpenter was the good guy. I thought, Oh, shit, I picked the wrong guy. I should have said, ‘I am the carpenter.’ But that wouldn’t have been the same, would it?”

Lennon heard a police siren while he was at his Weybridge home and to the rhythm of those two tones he wrote, “Mis-ter cit-y police-man”. His second idea was a ditty about sitting in his garden which he could do for hours upon end. The third idea was the surreal lyric sitting on a corn flake.

Mixing these lyrics up together, the song was beginning to take shape and he even included “Lucy in the sky”. Obviously this was a reference to their famous song “Lucy in the Sky with Diamonds“.

Further additions to the song came from former Quarrymen member, Pete Shotton, who asked Lennon to remind him of a nursery rhyme they sang as children:

“Yellow matter custard, green slop pie,
All mixed together with a dead dog’s eye,
Slap it on a butty, ten foot thick,
Then wash it all down with a cup of cold sick.”

As a result, this gave John Lennon another idea for the lyric, “Yellow matter custard, dripping from a dead dog’s eye”. Of course this was all nonsensical and Lennon knew it but a lot of the time he was high on LSD.

“The first line was written on one acid trip one weekend, the second line on another acid trip the next weekend, and it was filled in after I met Yoko.”

The origin of the eggman in this surreal song remains a mystery, but Eric Burdon from The Animals claims to be that person:

“It may have been one of my more dubious distinctions, but I was the Eggman – or, as some of my pals called me, ‘Eggs’.

The nickname stuck after a wild experience I’d had at the time with a Jamaican girlfriend called Sylvia. I was up early one morning cooking breakfast, naked except for my socks, and she slid up beside me and slipped an amyl nitrate capsule under my nose. As the fumes set my brain alight and I slid to the kitchen floor, she reached to the counter and grabbed an egg, which she cracked into the pit of my belly. The white and yellow of the egg ran down my naked front and Sylvia slipped my egg-bathed cock into her mouth and began to show me one Jamaican trick after another. I shared the story with John at a party at a Mayfair flat one night with a handful of blondes and a little Asian girl.

‘Go on, go get it, Eggman,’ Lennon laughed over the little round glasses perched on the end of his hook-like nose as we tried the all-too-willing girls on for size.”

Some think the eggman is basically Humpty Dumpty, but given Eric Burdon’s account it would be difficult to think otherwise.

Other Points To Note

Lennon invented some words for the song such as “crabalocker” (which precedes fishwife) and “texpert”.

Marianne Faithfull suggests that “Semolina pilchard” refers to Detective Sergeant Norman Pilcher. He built up a reputation for high profile drug raids, in particular, those from the music industry.

The British Broadcasting Corporation (BBC) banned the song from the airwaves because of the lines, “pornographic priestess” and “boy, you been a naughty girl you let your knickers down.”

“Why can’t you have people fucking as well? It’s going on everywhere in the world, all the time. So why can’t you mention it? It’s just a word, made up by people… It doesn’t mean a thing, so why can’t we use it in a song? We will eventually. We haven’t started yet.”

The Beatles began recording “I Am The Walrus” on the 5th September, 1967, in Studio One at the EMI Studios in London during the 7.00pm-1.00am session. They recorded 16 takes but only five were complete with the last one suitable for being the master.

After a few overdubs the next day such as John Lennon’s vocals and other instruments, the song remained untouched until the 27th September. George Martin brought in a 16-piece orchestra during the afternoon session and the Mike Sammes Singers later that evening. This was in order to create extra backing for the track.

On the 29th September, Lennon was tuning in on AM radio where there was a reading of Shakespeare’s King Lear. Lennon incorporates part of this is in the song on the third chorus but there is a little more at the end of the song. Together with Lennon still fiddling with the tuning dial on the radio, the session singers continue with, “Oompah, oompah, stick it up your jumper” in the background to fade out the classic composition.

Being the B-side of “Hello, Goodbye” the song went to number one in the charts in the UK, US, Australia, New Zealand and Canada as well as some European countries.

In the UK, both the single and the EP’s topped the charts together. Since “I Am The Walrus” was on both formats, this song has the distinction of being a number 1 and number 2 at the same time.

On The Beatles’ “Anthology 2” album in 1996 there is a version with the basic backing track although John Lennon’s lead vocals do feature. Meanwhile, on their 2006 “Love” album, there is another remix version.

The song is open to interpretation just like many other Beatles’ songs, however, Lennon is pretty clear:

“‘Walrus’ is just saying a dream – the words don’t mean a lot. People draw so many conclusions and it’s ridiculous… What does it really mean, ‘I am the eggman’? It could have been the pudding basin for all I care. It’s not that serious.”

After finishing the song he once said to former Quarrymen bandmate, Pete Shotton:

“Let the fuckers work that one out, Pete”

In the Beatles’ song from 1968, “Glass Onion“, Lennon sings, “Well here’s another clue for you all, The walrus was Paul”.

The song is still open to interpretation and will possible be for a long time to come!

Tagged A Whiter Shade of Pale, Acid trip, AM radio, Crabalocker fishwife, Eric Burdon, Humpty Dumpty, I Am The Walrus, Oompah oompah stick it up your jumper, Pornographic priestess, Shakespeare's King Lear, The Eggman, The Walrus and the Carpenter, The walrus was Paul, Through the Looking-Glass, Yellow matter custard. Bookmark the permalink.

3 Responses to I Am The Walrus