“I Feel Fine” is a Beatles’ single from 1964 which got to number one in the charts worldwide. Of course, the B-side is “She’s A Woman”. Indeed, both of these tracks appear on many of The Beatles’ albums.

Written and sung by John Lennon but credited to Lennon-McCartney this was The Beatles’ eighth British single. Although they recorded the song during the sessions for the “Beatles For Sale” album, the decision was to release it as a single.

The band were becoming maestros in the recording studio by now, of course, and were always keen on experimentation with different sounds. Previously, electronic glitches and tape abnormalities gave the band some ideas which they would incorporate in their recordings. In this case we get another first from the Fab Four.

The record has one of the first uses of feedback deliberately incorporated into popular music. Although groups such as The Kinks and The Who would sometimes use guitar feedback as part of their live act, The Beatles were the possibly first band to use it in recordings.

There are many song which have a distinctive opening note, of course. Not only did The Beatles make good use of the feedback, but it became the opening single, percussive note of the actual track. This came about by pure accident yet again.

At the time, John Lennon’s guitar was leaning against Paul McCartney’s bass amp while he plucked his bass guitar’s A string. Lennon’s guitar then picked up the feedback.

Lennon’s guitar was a semi-acoustic electric guitar (a Gibson model J-160E) with an onboard pickup which allowed for extra amplification. 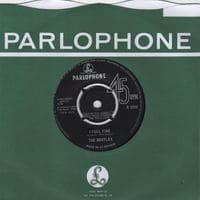 “We were just about the walk away to listen to a take when John leaned his guitar against the amp. I can still see him doing it. He really should have turned the electric off. It was only on a tiny bit, and John just leaned it against the amp when it went, ‘Nnnnnnwahhhhh!’ And we went, ‘What’s that? Voodoo!’ ‘No, it’s feedback.’ ‘Wow, it’s a great sound!’ George Martin was there so we said, ‘Can we have that on the record?’ ‘Well, I suppose we could, we could edit it on the front.’ It was a found object, an accident caused by leaning the guitar against the amp.”

“That’s me completely. Including the electric guitar lick and the record with the first feedback anywhere. I defy anybody to find a record – unless it’s some old blues record in 1922 – that uses feedback that way. I mean, everybody played with feedback on stage, and the Jimi Hendrix stuff was going on long before. In fact, the punk stuff now is only what people were doing in the clubs. So I claim it for The Beatles. Before Hendrix, before The Who, before anybody. The first feedback on any record.”

“I Feel Fine” became part of The Beatles’ live performances and they sang it on their last concert. This was at the Candlestick Park in San Francisco on the 29th August, 1966, of course.

They began recording the song on the 18th October, 1964, in Studio Two of the EMI Studios in London during the 2.30pm-11.30pm session. They also recorded “I’ll Follow The Sun“, “Rock And Roll Music“, “Kansas City/Hey-Hey-Hey-Hey!“, “Mr Moonlight” and “Everybody’s Trying To Be My Baby“. Obviously this was a very productive nine hour session.

Their Anthology 2 album has the version from the TV show, “Blackpool Night Out” recorded on the 1st August, 1965, at the ABC Theatre, Blackpool, UK

“I Feel Fine” stayed at number one in the British charts for 5 weeks, while in America it stayed top for 3 weeks. Their sixth number one record in the US in 1964, a record in itself. The other number one records that year were, “I Want to Hold Your Hand“, “She Loves You“, “Can’t Buy Me Love“, “Love Me Do“, “A Hard Day’s Night” and “I Feel Fine”.

The record also went to number one in many other countries such as Canada and New Zealand.