I Want To Hold Your Hand

The Beatles’ single release, “I Want To Hold Your Hand” was a number one record worldwide in 1963. However, this song also appears on many of The Beatles’ albums as well.

I Want To Hold Your Hand

The English language version gave the Fab Four their first number one hit single in America and the British invasion was about to begin in a big way!

In short, John Lennon and Paul McCartney wrote the song together:

“We wrote a lot of stuff together, one-on-one, eyeball to eyeball. Like in I Want To Hold Your Hand, I remember when we got the chord that made the song. We were in Jane Asher’s house, downstairs in the cellar playing on the piano at the same time. And we had, ‘Oh you-u-u… got that something…’ And Paul hits this chord and I turn to him and say, ‘That’s it!’ I said, ‘Do that again!’ In those days, we really used to absolutely write like that – both playing into each other’s nose.”

“I Want To Hold Your Hand” was the A-side on a single which had a B-side of “This Boy” in the UK. While in the US, its B-side was, “I Saw Her Standing There“.

The song didn’t feature on any of Beatles original 12 studio albums in the UK. However, because it was a single, it appears on the 1988 “Past Masters” album. 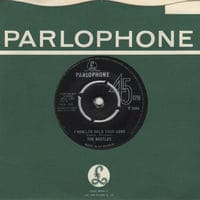 The Beatles began recording “I Want To Hold Your Hand” on the 17th October, 1963, and later, during the same sessions, recorded “This Boy” too. These songs were also the first Beatles records to be make use of four-track equipment and there were 17 takes that day.

Meanwhile at the BBC, they recorded the song for an edition of the “From Us to You” show, airing on the 26th December, 1963.

Of course, since it was a number one record, it appears on the 1 album from 2000 too. As well as all those versions, on the 2006 “Love” album, is a mixture of the studio recording and the Hollywood Bowl live performance.

The single topped the charts in the UK and the US as well as New Zealand and Australia. Indeed, both of those countries loved the Fab Four and couldn’t get enough of them. In the UK, this single replaced “She Loves You” during December, 1963. This was another first for The Beatles because it became the first time an act replaced itself at the top of the charts!

It also went top in Sweden, West Germany and a few other countries – Beatlemania had arrived big style.

Tagged Beatles' first number one in America, I Want To Hold Your Hand, Morecambe and Wise Show. Bookmark the permalink.